The Graveyard Rabbit--A New Carnival on the Block

Announced on January 31 at The Graveyard Rabbit: A New Carnival on the Block

The topic for the premier edition of this carnival is "exceptional finds." Share with us those rare and unique cemeteries, gravestones, monuments, memorials, inscriptions, etc


On a vacation several summers ago, we stayed at a resort in Shawnee-on-the Delaware, Monroe County, Pennsylvania in the Pocono Mountains. During a rainy day we decided to take a tour of the area on the Water Gap Trolley and one of the stops was the Historic Shawnee Presbyterian Church. We were not allowed to get off the trolley, so as soon as the tour was over, I persuaded my husband to drive back over to the church. 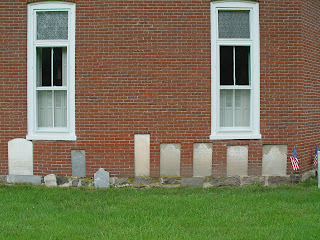 The first Presbyterian meeting house was built on this site on land given to Nicholas Dupui in 1753. In 1853, a brick building was raised over the original stone foundation. The granddaughter of Nicholas Dupui, Ann Depui Erb, laid the cornerstone. In 1893, a narthex and chancel were added which covered up some of the early burial spots. For the bicentennial of the church, massive renovations were done in the sanctuary, which gave a colonial look to the church.

The fascinating feature is the back of the church. Rather than moving those early pioneers that were interred, they simply built the brick wall of the building around the tombstones. 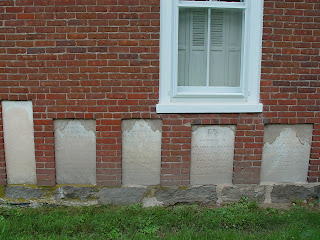 Those tombstones embedded into the back wall of the church are: 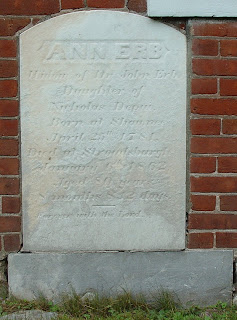 -BENJAMIN DEPEU who departed this life the 7th day of August 1806 aged 23 years.


FYI, Fred Waring the famous band leader of Fred Waring and the Pennsylvanians is also buried in the Shawnee Presbyterian Church Cemetery. 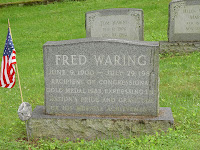