Social Distancing in the Age of Covid-19--A Positive

There was a day, fifty years ago, the first year Ted and I were married, probably in the spring of 1970, that we purchased our first piece of furniture.  I have always been in love with antiques, perhaps that is the reason I love genealogy.  Ted and I saw in the local Tiffin, Ohio newspaper that there was a sale of antique furniture at a farm outside town.  Not being from Tiffin, I have no idea where we drove that day.  I think it was somewhere out River Road, perhaps near what is called The Screaming Lady Bridge. 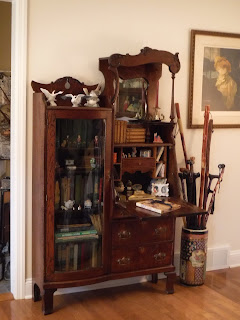 In those days we did not have much cha-ching and antiques were a popular commodity.  We wandered about the collection of sale items spaced here and there on the front yard of the farm house.  So many interesting pieces.  One, in particular grabbed our attention at the same time.  It was an old secretary with a writing desk and space on the side for books, enclosed by a bent glass door.  I had to have it!  The price was not too dear.  Ted found the sellers and bought it.

As we continued looking around, who should be run into but Ted's parents, his sister and his brother in law.  His mother was rather unhappy.  She had seen a piece of furniture that reminded her of one her mother once owned.  Unfortunately, it was already sold.  You can guess which piece it was and who the new owners were.  She probably carried that one to her grave.

The secretary has been a prized possession for fifty years.  It has been moved from Tiffin to Boston, from Boston to North Reading, MA, from North Reading back to Tiffin.  From Tiffin to Cleveland, from Cleveland to Lakewood, OH, another two moves within Lakewood and finally it has spent over 30 years in North Olmsted.  Moved with great care, the bent glass door removed.  Not often do you find these secretary's with the original bent glass.  This one is intact.

So, trying to stay busy while being laid off and social distancing in the house, I decided to paint many of the rooms and doors in my house.  To be honest, I am not the worlds most engaged cleaner.  I have always worked and in my free time find other more interesting ways to occupy my time than deep cleaning the rooms in my house.  To date, the most challenging room has been the living room.  It has not been painted since 2002 and probably not deep cleaned since about 2010. 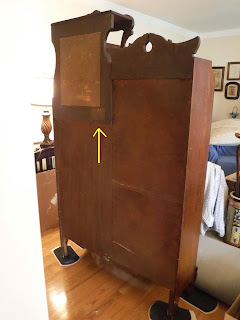 Today, in preparation of painting the first wall, I had to move that old antique secretary away from the wall.  Although I did not have much light, something on the back of the piece caught my eye.  Something I had never noticed before.  It was a sales tag nailed to the back of the secretary with the names of the manufacturer and the buyer.  What sweet find. 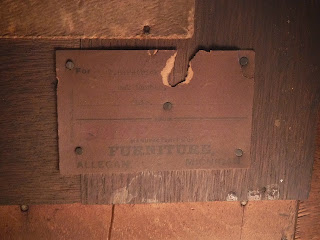 Now the genealogist in me is kicking in.  W. H. Hetrick, could be William H. Hetrick who has census reports in Oak Harbor, Ottawa County, Ohio in 1920 and 1930.  William was born in August, 1869, Sandusky County, Ohio.  I found that William was a salesman in a furniture store on the 1910 census.  So rather than William becoming the first owner of the secretary, it was probably being shipped to him at the furniture store in Oak Harbor where he was employed.  I had ball parked the secretary as having been made around 1910-1920.  By 1920, William was the manager of the store and continued to work there into the 1930 census. 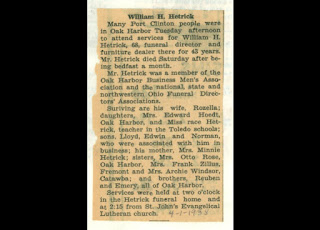 I was able to find William's obituary.  A very enterprising man, he was a furniture dealer and owned a funeral home.  He was a member of the school board and the US Lutheran Evangelical Church in America.  William married to Rozella Setzler in 1891 and together they raised five children; Lloyd William Hetrick, Viola R. Hetrick Hoedt, Grace L. Hetrick, Edwin H. Hetrick and Norman John Hetrick.  On March 26, 1938, at age sixty eight, William died at his home on Ottawa Street in Oak Harbor.  He is buried at Oak Harbor Union Cemetery, Oak Harbor, Ohio. 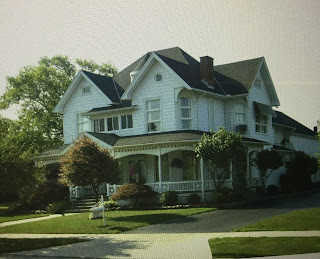 So, William was also a funeral director and owned a funeral parlor.  Back to google.

Taken from the Robinson-Walker website. " A century ago, it was common for furniture store owners to get into funeral service as well--after all they were the ones building the beautiful caskets.  This was the case for Hetrick & Son Furniture in downtown Oak Harbor back in the 1920's.  The W.H. Hetrick family opened Oak Harbors first funeral home in a large Victorian home that was built in the late 1800s at 165 East Water Street.  After World War II, the Hetricks sold the funeral home to Glenn and Mary Robinson."   Today the funeral home is known as the Robinson-Walker Funeral Home.

Often funeral directors lived in the houses where they had their business.  I can find no evidence William lived at the East Water Street house.  Federal census reports list the family at 352 Oak Street in 1910 and 312 Ottawa Street in 1920 and 1930.


However, on the 1940 census (1935 and 1940), living at 165 East Water Street are two of William and Rozella's sons with their wives; Lloyd William Hetrick, listed as the director of a funeral home and Norman James Hetrick listed as a clerk in retail furniture.  This census was after Williams death.  The sons were living upstairs of the actual funeral parlor.  I also found on Lloyd William's World War II draft registration card that he and his wife, Ethel, lived at 165 East Water Street and his place of business was listed as the furniture store at 169 West Water Street.