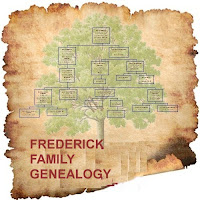 I have been researching the pants off these folks, primarily using online resources.  My last blog regarding Edna May Frederick Zeigler Gween, brings the reader up to date with all my latest research on her life. Now, I would like to continue with my first cousin once removed, her only child and daughter, Mary Alethea Zeigler Quinn.

I have touched on Mary's life in other Frederick Family blogs.  Truthfully, I don't know all that much about her.  I never knew her.  My mother did not follow her cousin through the years, although they lived within a short drive of each other.  Perhaps it was an age difference as my mother was born when Mary was eighteen.

Fortunately, I have found a few tidbits among the memorabilia by my Mom and her Mom, my maternal grandmother, Martha Marie Frederick Stark.

Mary was born about 1903, probably in Pittsburgh, Pennsylvania to Henry G. Zeigler and Edna Frederick Zeigler.  Her father, was a shoe salesman.  About 1915, when Mary was twelve, her parents divorced.  I have a World War I draft registration dated 1918 from her step father, William Clinton Gween, stating that he was married to Edna Frederick Zeigler.

From the two photos I have of Cousin Mary, she was a pretty young lady, favoring her mother, Edna May Frederick Zeigler Gween.

On November 2, 1925, Mary A. Zeigler and Robert Bruce Quinn, son of Thomas Brown Quinn and Margaret F. Wells Quinn applied for a marriage license in Pittsburgh, Allegheny County, Pennsylvania.  I have a little peek into the day of the wedding, November 4, 1925, thanks to my maternal grandmother and the typewritten account I found in my mother's "baby book".

This was a fun little find on Ancestry.  Mary was an employee of Joseph Horne's in Pittsburgh and several of them are presenting  series of Christmas programs.  KDKA is a Pittsburgh station.
On the 1930 Pennsylvania census, Bob is listed as a retail merchant for a garage.  Once again the waters become murky.  I have found a listing for about a ten year period from the late 1940's into the 1950's in Sharon, Pennsylvania for Robert B. and Mary Quinn.
In 1940, the Quinns were renting a duplex apartment at 611 Aureliaus Street, Swissvale, Allegheny County, Pennsylvania.  Robert was employed as an assistant metal----.  Both Robert and Mary are high school graduates.   Mary's mother was not living with them in 1940.
By 1942, Robert and Mary moved to Sharon, Pennsylvania slightly east from Youngstown, Ohio.  There are city directories for them in Sharon from 1942-1959.  Robert was employed as a factory worker with Westinghouse, although in 1945, he is listed as with the United States Navy.  There is then a gap between 1945-1952.  Could Robert have signed up to serve in World War II?  Robert B. Quinn did serve as a Corporal with the United States Marines during World War I from June 26, 1918 - April 15, 1919. 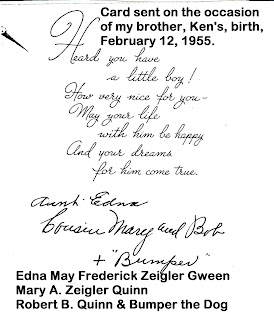 I have a card from "Aunt Edna, Cousin Mary and Bob and "Bumper" the dog from 1952.  Perhaps Edna had move to Sharon, Pennsylvania and was living with her daughter and son-in-law.
Mary and Bob did not have any children.  My mother told me that she thought that in her later years, Edna lived with her daughter and son-in-law.  The last address I have for them in the 1960's is on Alpine Blvd in Pittsburgh, which appears to be in the Forest Hills section of town. 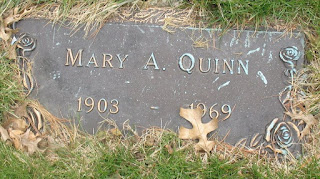 Mary Alethea Zeigler Quinn is buried in the same cemetery as her mother, William Penn Gardens of Remembrance located in Churchill, Allegheny County, Pennsylvania.  She died in 1969.

I did find a veterans card for a Robert B. Quinn.  Robert died September 24, 1971 and is buried at Woodlawn Cemetery, Wilkinsburg, Allegheny County, Pennsylvania.  I wonder why Robert is buried in a cemetery in Wikinsburg and Mary is in Churchill?