What is it about Decker's Creek? 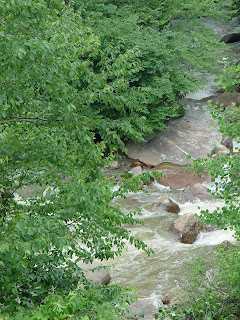 Why feature a photo of Decker’s Creek on my blog? I do enjoy taking photos of water, particularly moving water, however, Decker’s Creek is not just any West Virginia creek…it is special. Decker’s begins in the mountains just outside of Preston County and winds its way down through Dellslow, Rock Forge, Sabraton and through the east side of downtown Morgantown where it finally flows into the Monongahela River.

Decker’s Creek divides Morgantown into north and south. It crosses High Street near the old Hotel Morgan where Ken and I have enjoyed several glorious short vacation stays.

The real draw here is my history. My Grandmother Hughes aka Grams, was born and grew up in Morgantown. Her ancestors (and mine) go back in this area to the late 1700’s, when pioneer settlers began making their way west. Most of ours came from various towns in Maryland, probably taking dirt paths through the mountains along the same route that Interstate 68 crosses today.

Years ago, I did my primary research on microfilm at the Cleveland Historical Society in University Circle. Days spent scrolling through census reports on microfilm and microfiche. One day I was working on the 1900 West Virginia census looking for Grams and her family. They were at the top of the page….the first one’s listed and when I scrolled up to get the date and enumeration district number for my records, lo and behold, there….listed as the enumerator was my Grandmother’s Dad, my Great Grandfather, George E. VanGilder. And, the census read “that part of the Morgan District north of Decker’s Creek”

I guess it was at that moment that Decker’s Creek began to have some meaning for me.

Last summer we stayed at a golf/spa resort at Cheat Lake, north of Morgantown, for a week. On the first day, Ted and I drove along Route 7 (locally known as the Earl Core Road) which follows Decker’s Creek out to Dellslow and into the country. Ted was looking for a driving range, but I was looking at Decker’s Creek. On the way back I pulled the car over to the side of the road to take a few Miss Snap Happy shots. It’s a good thing my camera has a decent lens since I have found that I am not as agile as I was years ago and had to take the photos from the road.

What a sense of belonging….history…..familiarity……home.