No Day But TODAY 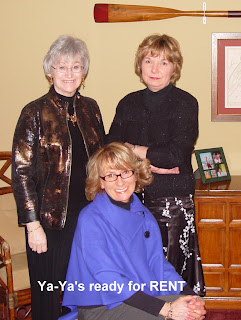 It has almost been one week since one of the best evenings I have experienced in some time. I would have commented on it sooner, but I have been waiting….and waiting….for the photo taken at the theater. I guess I will add it once it comes my way.

Last Friday began about a month ago over a glass of wine. My friend and next door neighbor, Grace, mentioned that she was given 4 tickets for the touring Broadway production of RENT. Now, RENT has to be on my top 5 Broadway musicals list. I remained calm as she told me that a client had given her the tickets for work done this year. She was planning to invite her son, her sister and the other two tickets would be for her husband and herself.

Last week, on Tuesday, Grace called to tell me that I might be the holder of one RENT ticket. With the holiday’s et al, I had forgotten about the show and which weekend it was. I told Grace not to tease me about something as important as an evening at RENT….she laughed. Wednesday I got the call. I would be going to one of my favorite shows. Ah glory!!!!

We gathered at Grace’s. Pat, her sister, and I had some wine while waiting for Grace and Chuck to get ready. Grace, Pat and I love to spend time together…road trips, spa trips, shopping trips….in fact we call ourselves the Ya-Ya sisters and wear special bracelets made of multi-colored healing stones as a symbol of the club.

Through a rather blustery evening, Chuck drove us to the Tremont area near the city. Very trendy restaurants, shops and pubs abound. It is a place I have always wanted to explore. The destination was The Southside. We had to sit at the bar for dinner as the place was mobbed. It had to be good eats to be so full at 5:00 on what was shaping up to be a miserable driving night in Cleveland.

Believe it or not I had the mac and cheese. It was a delicious blend of three cheeses and a pasta shape I have never seen before. The entree was topped with crispy chicken strips. Ah heaven. Behind us was an adorable performer singing his heart out and playing guitar. It was all too, too perfect.

Unfortunately, as a couple, Ted and I do not go out very much, but when I have an opportunity I always thoroughly enjoy myself. Cleveland offers so many terrific resources. I guess we have become too complacent sitting at home every weekend. Is there a New Years resolution building here????

Next stop was Playhouse Square. I think I have neglected to mention where these seats for RENT were located. Would you believe loge/box seats!!!! I have never sat in a loge seat for a theater performance. Cushy seats with a little table and waiters serving drinks and appetizers. Have I died and gone to heaven????

The show was wonderful and the frosting on the cake….the two leads….Mark (Anthony Rapp) and Roger (Adam Pascal)….were also the same men who were in the original cast on Broadway and also reprised their roles in the motion picture made a couple of years back.

It was a perfect evening all around.