Taking photos has always been an interest of mine. Family photos by the hundreds fill albums in the basement. Any occasion…there is a snapshot. Before digital, I seemed to go through cameras like Ted went through golf clubs. Of course he didn’t break his clubs, but for some reason my cameras, after short periods of time, were ready for the circular file.

This seemed to coincide with my increased interest in genealogy and I think it was taking photos of grave markers i.e. tombstones that “did them in.” Continually moving the lens in and out for those close-up shots probably knocked things out of whack.

Around 2004, I purchased a “real” digital camera from a fellow who was renovating my house. I was amazed at the clarity of his photos. One day he came to work and told me he had purchased a new digital. He was looking to sell his other one. He asked if I would like to buy it….he didn’t have to ask me twice—the camera was mine!

Snap…snap…snap…experimenting with the new camera was a hoot. So many functions and the instant reward of seeing them on the computer screen…what could be better!

We planned another trip to the UK for the summer of 2005. This time around I would take the digital and purchased a laptop so I had a place to download the photos daily. Our luggage for Scotland had the usual stuff, but Ken and I almost had an office between us….cameras, laptops, blank CD’s and DVD’s, jump drives, printers…yes a printer…paper and photo paper.

We landed in Edinburgh, the usual horrible early a.m. arrival flight…too early to check in and so tired from the jet lag that no one had any energy to do anything. The snapping began as soon as we landed…Edinburgh airport, the rental car with Ken driving from the “wrong” side, and on and on. 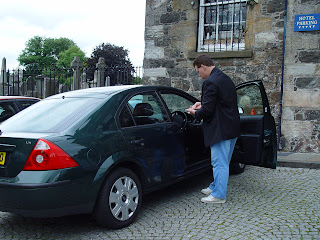 Fast forward to Stirling. On our first full day, after breakfast at the B&B we headed down into the Old Town area. The plan was to catch a bus over to the Wallace Monument. Walking down John Street, I became fascinated with the old architecture and couldn’t help myself….walking backwards down the street, snapping away. 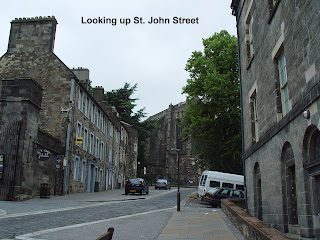 I guess it must have taken me awhile to get to Ken and Ted. As I came closer Ken remarked, “Well, here comes Miss Snap Happy!” and the moniker has stuck. 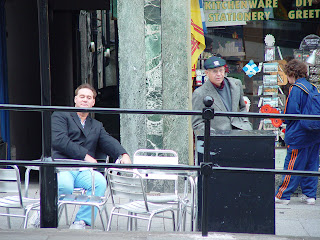 I have been able to use my photography at work, taking photos of runway models, informal modeling at shows, VIP’s at charity events and corporate big wigs during visual inspections, even designing the holiday card for the store.