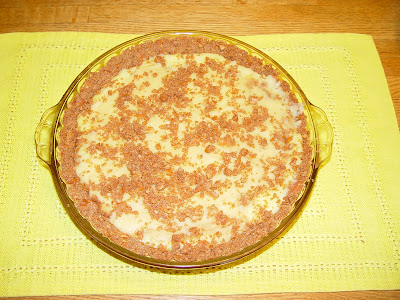 In July, 2004, my brother Ken and I decided to travel to Johnstown, PA. Ken had had a fascination with the Great Johnstown Flood of 1889 since his childhood and this was the summer to satisfy his curiosity. What made this trip of interest to me was the fact that the first person killed by the Great Johnstown Flood was Michael Mann….who just happens to be a great great great uncle of my best UK friend, Heather. Small world.

But I digress…back to the Zwieback pie.

Before we drove to Johnstown, we planned to spend a day with Dad, Edna and our Aunt Faith. Faith was driving up from Carnegie, PA to talk with me about our family genealogy and then I was going to drive her over to Monaca, PA., so she could show us where the Hughes family lived in the late 1940’s.

During our “family chat,” Aunt Faith mentioned that her mother, aka Grams, would make whatever dessert the kids wanted for their birthday. Now, I might mention here that Grams was quite a baker and she learned all she knew from her mother, Jessie VanGilder, who was a baker extraordinaire! My Dad recalled with great fondness the times he was walking home from school and he knew that Grandma VanGilder was visiting because the delicious aroma of baking was wafting up the street.

Aunt Faith said she would never choose a cake for her birthday. What she wanted, year after year, was Zwieback Pie.

How in the world would you make a zwieback pie? Zwieback, that tasteless toast that babies cut their gums on….made into a pie? I am not aware of any cookbooks from Grams’ estate. Did she even use one? She had learned to cook from her mother, a woman who ran boarding houses for decades and then became a cook on a riverboat in later years. I think Grams was just a woman who knew instinctively how to cook. A talent that is NOT part of my gene pool. My mother told me that Grams would see a new recipe in a woman’s magazine and then would make it, especially desserts. Perhaps that was the nexus of the Zwieback Pie recipe.

Short story long…..after googling “zwieback pie” for almost 5 years, finally it came up this week. Oh joy!!! Now, I could actually make a recipe that was one my grandmother made for years. All of the ingredients are things that would already be in the kitchen, except for the zwieback. So off I went to the grocery store. Would you believe that NABISCO no longer makes zwieback! After searching on the web I noted that there are substitutes and that is what I bought.

Here is the valued recipe and you will see that a Zwieback Pie is simply an egg custard inside a baked crushed zwieback with sugar, cinnamon and butter shell. It would have been a good dessert to serve in the 30’s and 40’s when money was tight. Perhaps it's time to resurrect it again.

PERSONAL NOTE: Aunt Faith does not remember meringue on top of the Hughes Family pie so I decided to just put the whole eggs into the mixture and did not make the meringue. Then I sprinkled the extra zwieback mixture on top and refrigerated it until dessert time. 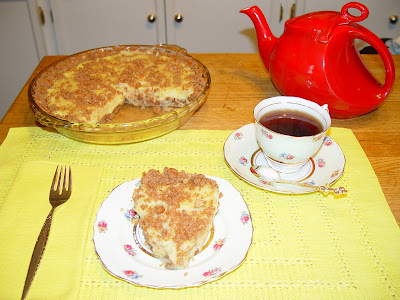