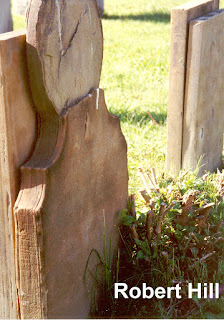 Robert Hill, my Paternal Great Great Great Great Grandfather, was born on February 5, 1758 in King William County, Virginia.  He was the son of William Hill and Elizabeth Johnson.  He served in the Continental Line during the American Revolutionary War.

Following his discharge he removed to Fredrick County, Virginia and there married Rebecca Caldwell on June 7, 1787.  The Hills removed to Monongalia County, (West) Virginia.  They lived on a property called "Hill Farm".  All or a portion of their farm was given to Robert for his service in the war.

Robert Hill died in Monongalia County, (West) Virginia on January 15, 1822 at the age of sixty two.  He was originally buried in a family plot called the Old Hill Cemetery on his property.  His remains were removed in the Spring of 1928 and reinterred at Mount Union Cemetery beside his wife Rebecca Caldwell Hill.

The inscription on his tombstone reads:

“Here lies the body of Robert Hill
Who departed this life Jan 15, 1822
Age 62.
Hark upon the tombs a doleful sound
My ears attend the cry
The living may come view the ground
Where they must shortly lie.” 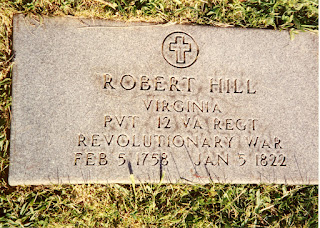 On June 6, 1971 the DAR met at Mount Union Cemetery and dedicated a marker for Robert Hill, a Revolutionary soldier.
Robert Hill on Find A Grave