One of the oldest pieces of memorabilia for my VanGilder line is an autograph album once belonging to my paternal great grandfather, George Ethelbert VanGilder.  It was in the possession of my paternal grandmother, daughter of George.  Back in the day one of her grand-daughters, Karen, was interested in calligraphy and Grams gave her this priceless piece of family history to look at the "fancy" writing and keep.  Fortunately she kept the small book and graciously had the pages professionally copied for me.
When I first saw and held this precious family document in 1996, shivers went down my spine.  At that time the autograph album was one hundred and eight years old.  I must admit that my Grams did have a small treasure trove of historic family items in her possession.  Over the years much of it has come my way through sharing or gifting.  I sometimes wonder if Grams' three sisters also were in possession of family archival items.  Have they been lost to the ages? 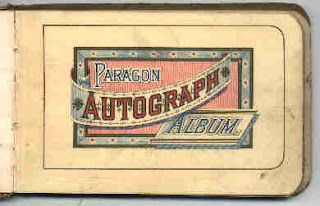 There are forty-one messages/poems/verses from family members, friends and students.  All are written in 1888 except one in 1889.
George's father, John Oliphant VanGilder's farm is underlined in red. 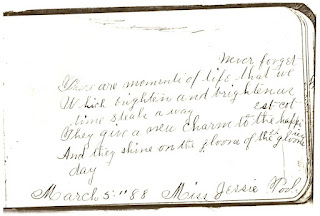 The other underlined farm in red is, Sampson Frum Pool, father of Jessie Pool.  Jessie was a student in George's class and married him in 1891.  Jessie and George were second cousins a couple of times removed.  Their genealogy descends from a common ancestor, Jacob VanGilder and Anna Margaret Kibler/Gibler.   Jessie's mother was a Harner and sister to Philip Fairchild Harner mentioned below.  George and Jessie had common cousins; however, their genealogy did not descend from that line.
Two students who signed the book were Cora and Sallie Harner.  Both attended Woodland School and were in George's class.  Their father was Philip Fairchild Harner, whose farms are underlined in blue.  The girls had a decent travel from their family farm to Woodland School #2.  George and the Harner girls were first cousins.  George's mother, Mary Louise Hill VanGilder was the sister of the Harner girls mother, Elizabeth Hill Davidson.  Perhaps Cora and Sallie stayed with the VanGilder's during the school months. 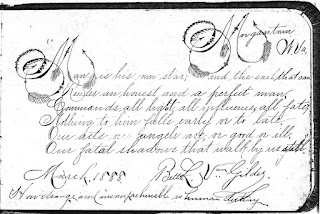 I thought I would share the "artsy" page.  This is George's sister, Betty Levada VanGilder.  She would have been nineteen years old when she signed this.
George was enrolled at West Virginia University for, at a minimum, two years.  He is listed in two journals I found on line.  In the 1881-1882 WVU Journal he was listed as an irregular preparatory student meaning he did not study Latin or Greek.  In the 1882-1883 WVU Journal he was in the preparatory program.  George did have some higher education to prepare him to teach.
The area had a free school system and George would have taught in a country school.  "The Acts of 1871-3 provided the county superintendent should be assisted by two examiners, appointed by the presidents of the Boards of Education in the county, in the issuing of teacher's certificates." (Henry)
Numerous pages in the autograph book, signed by his students, have Woodland School also on their page.  Woodland School #2 is highlighted in yellow.  It is directly beside Woodland Methodist Episcopal Church.  It appears that the existence of the school predates 1857.  Of interest, Thomas Warman, mentioned in the article, had several children in George's class.  His farm is highlighted on the map above.
What I learned from George's autograph book.  He was well liked by all who signed.  "Friend George" is very prevalent as well as "Your Friend".  Even students referred to him as friend.  He may have only taught for a couple of years.  It appears to have been a one room schoolhouse and George was teaching various ages.
He had a distance to cover from his father's farm.  I wonder if he made the ride by horse daily or stayed on a farm near the school?
His nickname was Tim.  It is printed on the inside of the book and on Ide B. Harner's page is to "Friend Tim".  Ide was the daughter of George Washington Harner and Lavina Ruth Hickman.  Not biologically related to George; however, was a cousin to Jessie Pool through her Harner line.
Both George Ethelbert and his father, John Oliphant were actively involved in the education of students in the Morgan District.  John O served as the president of the Board of Education in 1883 and George served as the Secretary of the Board of Education.  (Wiley, 657)

-VANGILDER, GEORGE ETHELBERT--Wordless Wednesday
In 1996, on USGenWeb Archives, I listed the names and relationship of the folks who signed the Autograph album in 1888.

There is also a page for the autograph album on my very outdated website, Family Genealogy Home Page.  There are scans of individual pages for George's Mother, Mary Louise Hill VanGilder, Aunt Sophia Hill, his siblings and a young student who would become his wife, Jessie Pool.