Back to the 50's--Hiland Presbyterian Church 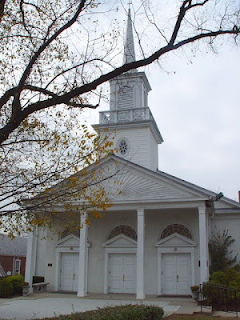 As I have mentioned in the other Hiland Church blogs, that it was an integral part of our lives when we lived on Washington Drive (1951-1961).  Dad was on the Session and Mom was involved in a Circle and was an actor with with The Hiland Players.  We kids annually wanted the perfect attendance award. 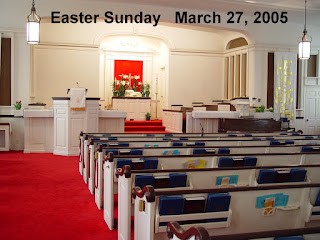 Located on a hillside along Perry Highway, the historic building was within walking distance of our house. I have vague memories as a young child going to Sunday School in the church building and that there were small rooms behind the sanctuary, and perhaps in the basement.  We were members when the Fellowship Hall was built.  All church school was moved there and with the huge hall, numerous events were hosted there.
Dr. Harry William Pedicord was at the helm the entire time we attended.  An energetic, charismatic man, church life was busy and all week long.  I have read an interesting article written in The Pittsburgh Post Gazette in 1961.  Dr. Pedicord was involved in theater when he attended Washington& Jefferson College.  He translated that love of theater into church life at Hiland. 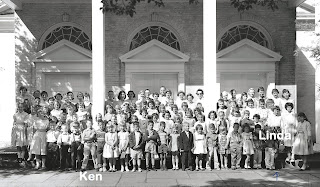 Every summer there were two weeks of Bible School. At the start of every day, Dr. Pedicord would open school with a prayer and songs. I can still see him, now some 65 years ago, standing up front leading a rollicking song version of "The Books of the Bible." As an adult, I am certain that he made up the song and the lyrics. 😃 Genesis, Exodus, Leviticus, Numbers, Deuteronomy.... I can still say them decades later.
I attended from first through fifth grade.   Frankly, the religious foundation laid at Hiland, was the basis of me minoring in religion when I was in college. 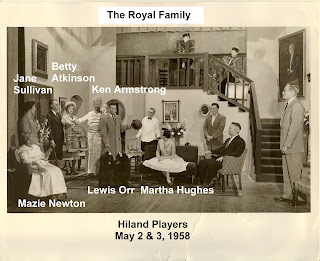 My mother was very involved in The Hiland Players.  I believe there may have been two performances annually.  Selling tickets to the shows somehow unhappily fell into my domain.  I absolutely hated going from door to door trying to sell those tickets.  The other church members who were actively involved in the shows became close friends of my parents.  Oddly, none of them had children.  They became the crowd that would gather at our house on Christmas Eve every year to eat, drink and set up our gifts.  I know they all have made Hiland Cemetery their final resting place.
Pancake Dinner.  Racially inappropriate, Aunt Jemima was there.....and she was my Sunday School teacher in black face.  When boomers harken back to the good old days, this is not a good old days picture and yet, sadly, it was so accepted.  I do not believe that any Black families lived in the area.
We moved to a new house in 1961 and became members of a new church.  The youth leader there was personally involved, with other ministers, on marches in the south.  It was in the new church, I moved into a more progressive thought process (a child of the 60's).  I wonder if Hiland also acknowledged the social and racial issues of the 60's and addressed them.  Both areas in the North Hills of Pittsburgh where I grew up were very white.  My high school was still not racially diverse when my youngest brother graduated in 1973. 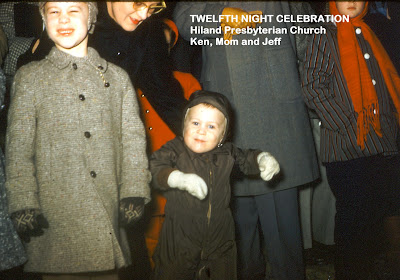 Twelfth Night is covered in another blog.  The burning of the Christmas trees beside the church building out back and then the celebration in Fellowship Hall.  Huge frosted spice cakes with twelve gold crosses baked inside.  The lucky finders kept the cross for a year, then returned it to be cleaned and baked into the next years cakes.  I would starve myself so I could eat cake.  The last year we attended Hiland, before our move, I finally got a cross.  To this day, spice cake is one of my favorites.
I imagine my week at Camp Crestview was a springboard of Hiland Church.  My first camp experience and week away from home was at a Presbyterian Church camp in Slippery Rock, PA in 1957.  Ruthie and I attended for two years 1957 & 1958.  Pleasant memories.  We slept in cabins, each cabin had a daily duty i.e., kitchen duty, setting and cleaning tables in the mess hall, cleaning the pool in the morning, etc. Each cabin set up a campsite, which Ruthie and I certainly had experience 😃.  Evening vespers were held every night at the individual cabin campsites and at the end of the week, there was a large site for the final night vesper.  It was at camp I first had cooked cereal.  Although it was pretty lumpy and thick, I loved it and still is a favorite winter breakfast.  Also, it is my first remembered crush on a camp counselor. LOL
I was confirmed at Hiland.  Took the classes, passed the test and became a member.  I was now able to take part in the monthly communion church service and was a member. 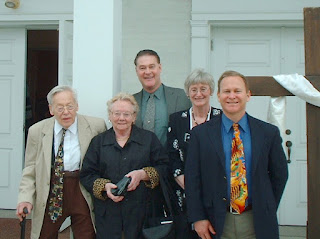 At some point in time, my Father must have switched his church membership back to Hiland.  In 2004, my brothers and I spent Easter with Dad and Edna and we attended Easter Sunday service at Hiland.  It was soothing to be back in the sanctuary. 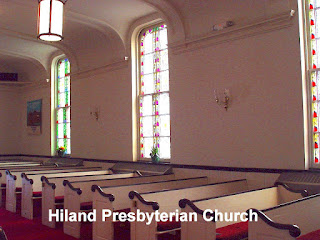 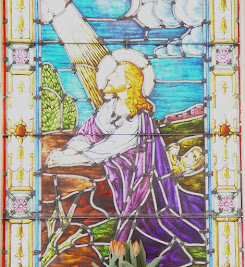 The beautiful stained glass windows, the white painted pews....nothing changed.
When I attend a church service, it is in a Presbyterian Church.  The hymns and liturgy take me back to the church of my youth.  It is very comforting and familiar.
******************** 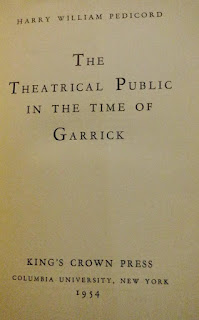 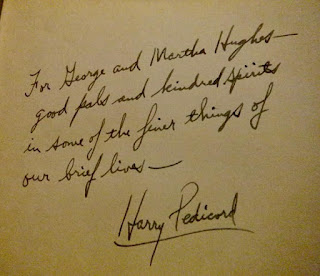 My brother, Jeff, emailed me this last night.  I had never seen it before.  A gift to my parents from Dr. Pedicord.
Additional Hiland Presbyterian Church Blogs on Flipside

Labels: Back to the Fifties, Growing up Hughes, Life on Washington Drive