When TV was in its infancy, no internet, cell phones, video games, kids had to make their own entertainment.  We were fortunate to have a magical playground right behind our house--The Woods.
We moved into a housing plan called North Hills Estates in 1950 when I was only three.  Estates is somewhat of a misnomer, the residences were houses, not mansions.  The allure of the woods began when I was in elementary school.  Of course it was always behind our house, it simply was not a place I explored as a youngster.

Then came the day when my neighborhood bestie, Ruthie, and I made our way down the steep slopping hillside behind the Steigerwaldt house.  That became our pathway over the years into our enchanted playground.  At the bottom of the hill a creek trickled through.  Usually, it was not too full of water, unless we had a torrential downpour, although there were a few deep spots.  This area was a valley.  Our street, Washington Drive up the hill on one side and Harden Drive up on the other. 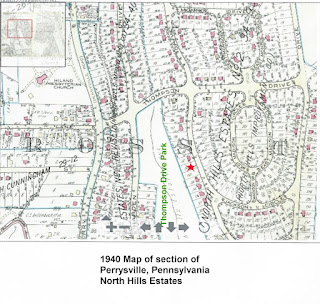 It never occurred to me that this area had any name other than the Woods.  When I was blogging about Washington Drive, and did a deep dive into the history of the area, I was surprised to find an old map with the plans for development of North Hills Estates.  Our house was just a lot.  The woods actually had a proper name, Thompson Drive Park.  The creek, nameless, was a feeder stream into Girtys Run at the corner of Rochester Road and Evergreen Heights Drive almost to Babcock Boulevard.
The creek supplied an endless amount of play.  There were a few deep areas that Ruthie and I would step into and splash around to cool off in the summer.  Slowly flipping stones, looking for aquatic life provided thrills.  There was usually some form of crawfish that backed up when we uncovered them.  Frogs, salamanders, turtles and very small fish, probably minnows, hung out in the cool creek.  We would even visit the creek in winter and skate on the icy surface in our boots.
Day tripping in the woods, Ruthie and I would spend entire days down there.  We set up a camp downstream on the creek.  It was past a hill that we named violet hill.  In early spring the area was covered in lovely purple violets.  We picked baskets full, made small violet bouquets tied with ribbon and sold them to neighbors for a nickel.
Our camp had a fireplace, a dirt ring enclosed by stones.  We would pack food and cart it down the hill and along the creek to our campsite.  Often we had a fire and made hot dogs and s'mores.  As far as I knew, no other neighborhood kids went as far as we did nor did they know of our camp.  So many summer days were spent at our private camp, eating, talking, playing board games and just exploring.  Two girls just having fun.
The younger boys in the neighborhood, primarily my brother and his friends, had their area the opposite way along the creek--toward Thompson Drive.  Their hideouts were up on the hill.  When Ruthie and I would wander up that way, they would occasionally "bomb" us with pulled weeds, roots and dirt still attached.  Bombs away.......
I can admit at now age seventy-five, we would sneak cigarettes down there.  Smoking at elementary school age!  All of our parents smoked, so lifting a couple out of their packs was not a problem.  Later in life, I learned that my brother was also doing this.  😀
There was a time in 1985, when my sons were young, that we, along with my Dad went to Washington Drive to visit the Steigerwaldt's.  I took my kids down the, now over grown path, into the Woods.  We did not get very far.  The markers were long gone and frankly my boys were not interested.
There are few photos, only memories. 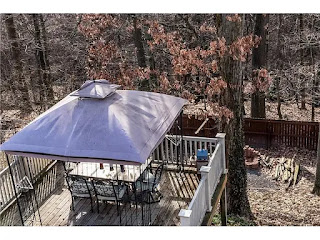 I have lucked out finding current pictures of The Woods out on Zillow.  Primarily due to the fact that at the back of both the Steigerwaldt and "our" old property, decks have been built overlooking the woods.  Areas behind both properties have been cleared; however the depth of those beloved woods can be seen behind the fencing.
Additional Blogs on Flipside
745 Washington Drive Where My Childhood Memories Live

Labels: Back to the Fifties, Growing up Hughes, Life on Washington Drive