We spent a lovely visit with Ted's Aunt Betty during the Christmas season, 2021.  She spent her adult years gathering the family genealogy.  Having never seen a Seewald watch or clock, I was thrilled to know she had a Louis Seewald clock hanging on the wall.  Frankly, I have done very little blogging on my husband's family.  The clock became the springboard for the research and this blog.
Johann Louis Seewald, the maternal great great granduncle of my husband.  In his home of Tiffin, Ohio, he was known as Louis, Lewis and Lew.  He was the son of Johann Phillip Seewald and Christina Louisa Lang. Louis was born on September 15, 1831 in Sipperfeld, Kirchhein, Bavaria, Germany and the third known child born into the Seewald family.

The John Phillip Seewald family arrived in Tiffin, Seneca County, Ohio in August 16, 1833.  John Phillip, my husband's maternal great great great grandfather, known as Phillip, was a clock and watch maker by trade, a skill he passed on to his three sons.  Phillips brother, Valentine Seewald, arrived in Tiffin on August 18, 1833.  Also arriving in Tiffin on August 16, 1833 were the parents of Christina Louisa Lang Seewald, George Ludwig Henry Lang and Catherine Schuetz Lang with six of their children.

Four years after arriving in Tiffin, The Seewald Family suffered the loss of daughter and sibling, Sophia, at age three.  There is no burial marker or further information about Sophia. 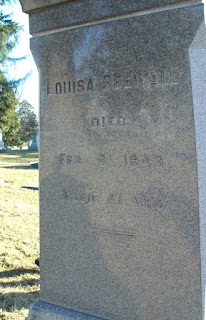 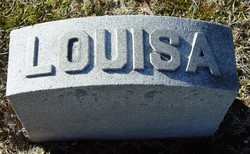 From a young age, Louis, along with his brothers, apprenticed in their father's shop in Tiffin slowly honing their skills in making and repairing clocks and watches.  All three were gainfully employed in the jewelry trade as adults.

I do want to note here that the birth dates of both Louis and Susan are somewhat approximate.  There are various records that show different years of birth.  I am using the years that are on the grave markers. 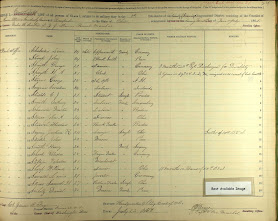 A list of men eligible to serve in the Civil War was taken in Tiffin's 4th Ward during June and July, 1863.  Lewis Seewald, age thirty-one, white, married, a jeweler, born in Germany is part of the registration.

On November 27, 1864, The Seewald's welcomed a son, Roscoe Stebbins Seewald to the growing family.

Posted on May 9, 1867, Louis moved his jewelry store to Market Street in a room in the National Exchange Bank Building.  Up until this time, Louis was working in his father's store.  He and his father had a difference of opinion, Louis wanted to expand the business, his father did not.  Louis succeeded his father in 1867 and moved the Seewald Jewelry operation to a new and larger space.
Posted in an October 1876, The Tiffin Tribune newspaper, Louis mentions his motto, "Quick sales, small profits."  His store is in the new Nationale Exchange Bank Building on Market Street south of the courthouse. 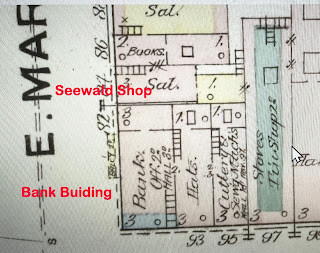 This map is from 1887; however, it shows the area of Louis Seewald's first jewelry shop as gleaned from newspaper advertisements and articles.  Numbering of buildings changed over the twenty years as more were added as Tiffin developed.  I do want to mention, as a student of Heidelberg College and short term resident after marriage, I not only remember a bank building on that corner in the mid 1960's to mid 1970's, in fact, my and our accounts were there. 😉
On October 27, 1867, a second daughter, Cora L. Seewald was born in Tiffin, Seneca County, Ohio.

In November, 1869, Louis added Lazarus & Morris eye glasses to his growing inventory.  He advertises that his is the only store in Tiffin that carries this brand.
The Seewald family is enumerated in the 1st ward of Tiffin, Seneca County, Ohio on the 1870 census.  Louis lists his real estate value at $6,000 and the value of his personal property at $4,000.
Louis was reimbursed for gold pens and holders for the City Auditor and City Treasurer by the Board of Seneca County Commissioners on September 6, 1871.

A nice peak into the Seewald business passing from father to son.  Louis had a eye for business, moving to a new, larger location and adding additional stock.
Louis had an active life as a Councilman in Tiffin.  The online source I was able to use only went to 1879.  My guess is that he remained on the City Council through the 1800's and perhaps until his death.  Many of the council articles were the usual city issues--streets, street lighting, election of city officials, etc.  There were several issues where spirited engagement occurred.

Several battles found in The Tiffin Tribune during 1874.  From some of the newspaper articles, it appears that Louis had definite opinions and was not afraid to verbally express them.  He was not in favor of the temperance women's loud singing in Tiffin.
Louis Seewald ran for reelection in Ward 4 on the Democratic Party slate.  The Tiffin Tribune appears in this article to not be a supporter of Louis.  Seewald won.
He fought against the ringing of the fire bell except when there was a fire and he was not a fan of the Tiffin Fire Chief and managed, politically to have him removed from his post.
What could have been a fatal accident, Louis' cousin, Judge William Lang, was visiting the jewelry store and was trying to get a cartridge out of an old shot gun and the gun fired.  The bullet went through the wall of the bank next door.  Fortunately, the room was empty.
On  November 4, 1875, Louis' sister's husband, Jacob Wilhelm Oster, committed suicided and Louis was appointed administrator of the estate.  Katherine Seewald and Jacob Oster, are my husband's maternal great great grandparents.
Within my husband's family, there was talk about the Seewald town clock at reunions.  I've taken a deep dive into this and still have questions.  My husband's maternal great great great grandfather, Phillip Seewald, did make and maintain the first town clock.  While Phillip was still alive, his son, Louis Seewald, was commissioned in 1876 to provide a new town clock for the court house steeple. 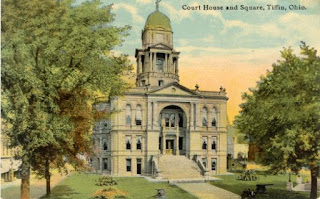 In 1884, a new courthouse was built.  My question is, was the Louis Seewald clock from 1876 added to the steeple, a new Louis Seewald clock, or another clock makers clock?  The answer to this question is probably in the Tiffin newspapers from the time period.
Unfortunately for me, newspapers.com only covers from 1856-1879.  Again, as a resident of Tiffin during college and as a newly gal, I remember the "old" court house shown above.   According to an article, In The Tick of a Clock There is a Song by Emily Rinaman, the original 1884 clock was replaced n 1944.
The end of the 1870's saw two deaths in the Seewald family.  Louis' sister, Philipina Seewald Zoeller at age forty-eight in 1877 and his father, Phillip Seewald at age seventy-nine on October 30, 1878.  Both are buried in Greenlawn Cemetery, Tiffin, Ohio.
By 1884, Louis had moved his business onto 118 South Washington on the Snyder Block and his residence was south of his store at 202 South Washington.
Luckily, there is a Sanborn Fire Insurance Map from Tiffin, Seneca County, Ohio image 4 from 1887.  The first illustration shows the location of Louis' first store and the second store located around the corner.  The map for 118 South Washington Street has watches marked for the store. 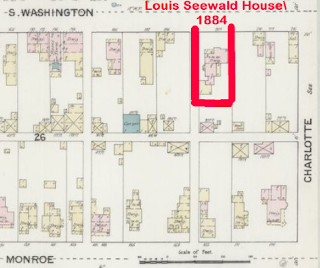 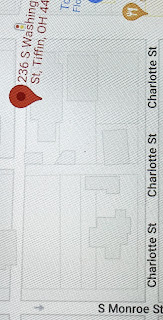 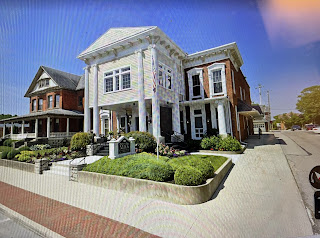 Once again turning to the 1887 Sanford Fire Insurance maps, 202 South Washington Street was easily located on map 5. A sizeable residence, I wondered if it was still around today. Again, over the years, the street numbering has changed, no longer 202, but today 236.  The former home of Louis and Susan Seewald does exist today, and like so many large, historical homes, it is currently a funeral home.  The house has been enlarged in the back and I am certain that the large yellow upper front addition was not part of the original house.
Louis was an officer of the Tiffin School Board.  To be honest, I did not check the numerous annuals for the school.  Louis Seewald may have been on the Board a number of years.
The 1900 Ohio census, shows that Louis owns his home free of mortgage.  Daughter, Cora and widowed daughter, Eugenia Seewald Horton and her two children, Louis W. Horton and Catherine Horton are living in the Seewald home.  Something of interest in this census is that Susan lists four children born and three alive in 1900.  Records that I have found only list three children.
What is described as a daring robbery took place in Louis' jewelry store on October 12, 1900.  According to one newspaper article, grand daughter, Catherine Horton was present in the store during the robbery.  An entire case of diamonds was stolen.  The worth, as described n various newspaper accounts varied from $2,000 to $5,000.  The two men were apprehended.
Children and Louis Seewald and Susan Orwig Seewald:
I apologize that I do not have a copy of Louis Seewald's obituary.  I would be shocked if it was not on the front page of the Advertiser Tribune.  During his life time he was a pioneer of the city, politically active in the community and ran a very successful jewelry business.  Oddly, I have not located his death record. 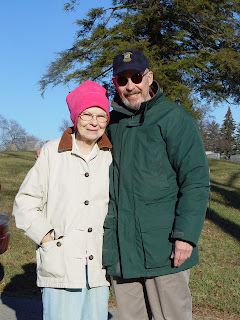 I dedicate this blog to Aunt Betty Smith Bowman.  She spent her adult life gathering her family genealogy and was aways willing to share information and  good story.  The picture above is of Aunt Betty and my husband, her nephew, taken in Tiffin, Ohio.  It was an unusually warm day in January 2009 and we were walking through Greenlawn Cemetery.  She knew the location of every ancestor's grave marker and I had my trusty camera with me.
Clock photo credit:  Garrett Bevin Hiser
Other Seewald Blogs on Flipside
-SEEWALD COUSINS
-SEEWALD, PHILIP--Jeweler and Clock Maker Extraordinaire