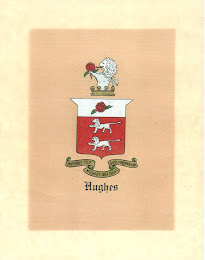 I did not wait until Pennsylvania finally posted their death certificates on line. John George Hughes and Elizabeth Olesen Hughes are my paternal great grandparents and I was in a "need to know" frame of mind years ago. The state of Pennsylvania was very happy to accept my check for copies of both.

The copy I received of my great grandfather's was, to say the least, awful. Barely legible, I had to scan and enlarge sections of it to figure out some of the information. Not satisfactory!! The information that I desperately needed was his burial place. That I could read. My surprise recently was the very clean copy of the same death certificate that is now out on ancestry.

Of interest to me was that my Dad signed my great grandmother's as the doctor pronouncing her dead. There are two family stories about Great Grandma Hughes (aka Noonie) death. I can't remember if I have covered them here on Flipside, so this may be a repeat performance. The second story by my Dad was told to me after I received the copy of the death certificate and my surprise that he was the physician of record.
Story #1 Cousin Kae, who must have had some form of nurses training, was attending to Great Grandma Hughes and was at Grams and Pop Pop's apartment on the day of her death. Cousin Kae told me during a telephone call years back that she came into Noonie's bedroom and saw that she had passed. Noonie did not have a good reputation in the family....apparently she was verbally abusive, especially to my Grandmother Hughes (Grams). Cousin Kae told me that she grabbed a scarf from the adjacent bedside table and tied it tight around Noonie's head, from top to under her chin to hold her mouth shut before rigor mortis set in. Kae commented to me, "Well I tied that scarf extra tight to permanently seal her mouth!" Kae was extremely proud to tell the story.


Story #2 This involves my Dad. Dad had a full day of hospital rounds and office appointments the day Noonie died. It was rather late in the day when he was finally able to drive over to Bellevue and pronounce his grandmother dead. His father, my Pop Pop, was very irritated that it had taken Dad so long to get over. He probably wanted the body removed from the apartment house. Certainly can't blame him there ;-) Dad's response to his father was, "Well, Dad, I thought it important to attend to my living patients first." My Dad loved to tell this story figuring he had one upped his own Dad.

My Dad, George VanGilder Hughes--The doctor and son of George Henry Hughes and Sarah VanGilder (aka Pop Pop and Grams).

Cousin Kae. Not a Hughes. Kae was the daughter of Gram's sister, Anna Estelle VanGilder. She lived with Grams and Pop Pop for some time when they lived on Ohio River Boulevard in Avalon, PA. Kae was actually Dad's first cousin.
More on John and Elizabeth

I WOULD LOVE TO HEAR FROM YOU. All comments are welcome; however, if they are inappropriate, they will not be published. PLEASE post your e-mail in the comment section if you would like to network about a particular surname or topic. I will capture it for my use only and not include it when I publish your comment.
© 2015, copyright Linda Hughes Hiser
﻿﻿﻿
Posted by Linda Hughes Hiser at 3/31/2015 10:21:00 AM