Emily was born in April 1883.  Her information when she crossed the pond is having been born in Sunderland, England.  Her sister, my paternal great grandmother, listed Hartlepool, England as her birth place on Emily's death certificate.  I have found an Emily Maud Olesen born in Sunderland on the Sunderland on line website.  Unfortunately, the site only lists her name--no actual birthdate.

Emily was the fourth child born to Christian Invart Olesen and Ferdinande Weiss.  Christian Olesen died suddenly in 1892 when Emily was only nine years old.  Her memories of her father were probably slight.  The family lived on Bolton Street in the All Saints Parish, Stranton, West Hartlepool for many years following his death.

The only census from England that I have for the family is the 1901 Durham County.  Emily is listed on the census as born in Sunderland and she is apprenticed as a dressmaker.  Emily and her older brother, William Christian Olesen are supporting the family.  I pause to thank my good English friend and genealogy buddy, Heather, for helping me locate hard copy documents on my Olesen/Hughes Hartlepool lines. 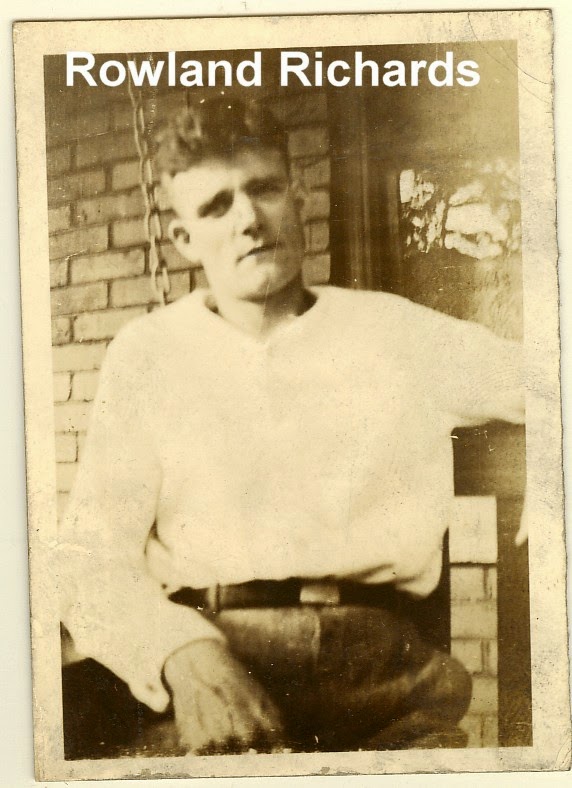 At age twenty three, in 1906, Emily married Rowland Richards in a wedding ceremony held at All Saints Church, Stranton, Durham County, England. (Marriage Record Ref # H-501-1-0-419) Rowland Richards was born on June 30, 1881 in West Hartlepool, England and was the son of Rowland Richards and Jane Ann Vaughn.  When I showed my Aunt Faith Rowland's photograph, she replied, "Everyone loved Rowland.  He was a peach of a guy".

There is a 1911 English Census report for the couple and are residing in Durham County, England.  I do not have a copy of it.

Perhaps the lure of a better life in America compelled Rowland's immigration to the United States. He sailed aboard the SS Columbia from Glasgow, Scotland on April 4, 1914. His occupation is listed as a blacksmith.  Rowland arrived at Ellis Island on April 14, 1914. His destination was 2341 Wright Street, South Side, Pittsburgh, Pennsylvania--the home of my paternal great grandparents, John George Hughes and Elizabeth Olesen Hughes, Rowland's in laws.   He sailed alone.  Emily was left in the UK. 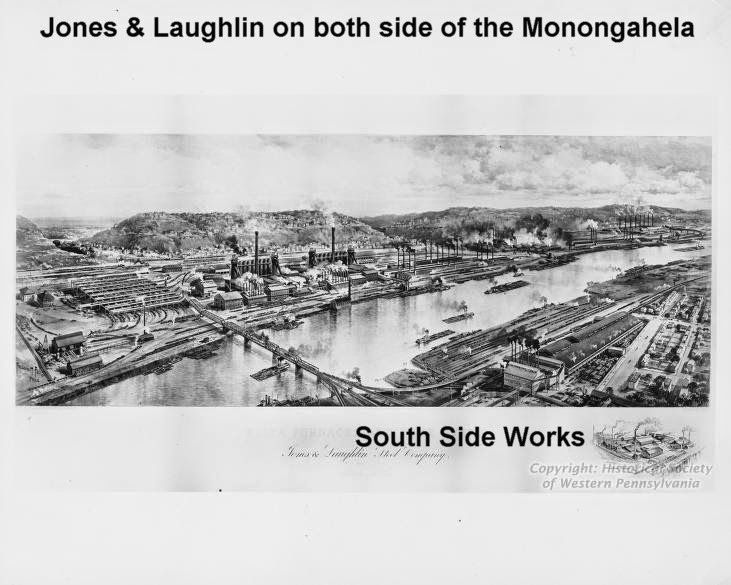 I imagine that Rowland became employed at the same mill as his brother in law, John George Hughes--American Iron Works--located on the South Side of Pittsburgh between Carson Street and the Monongahela River.  Later the iron works became Jones and Laughlin Steel South Side Works.

Rowland lived with my great grandparents for at least six years.  Following his paperwork has helped me to fill in a timeline for them. 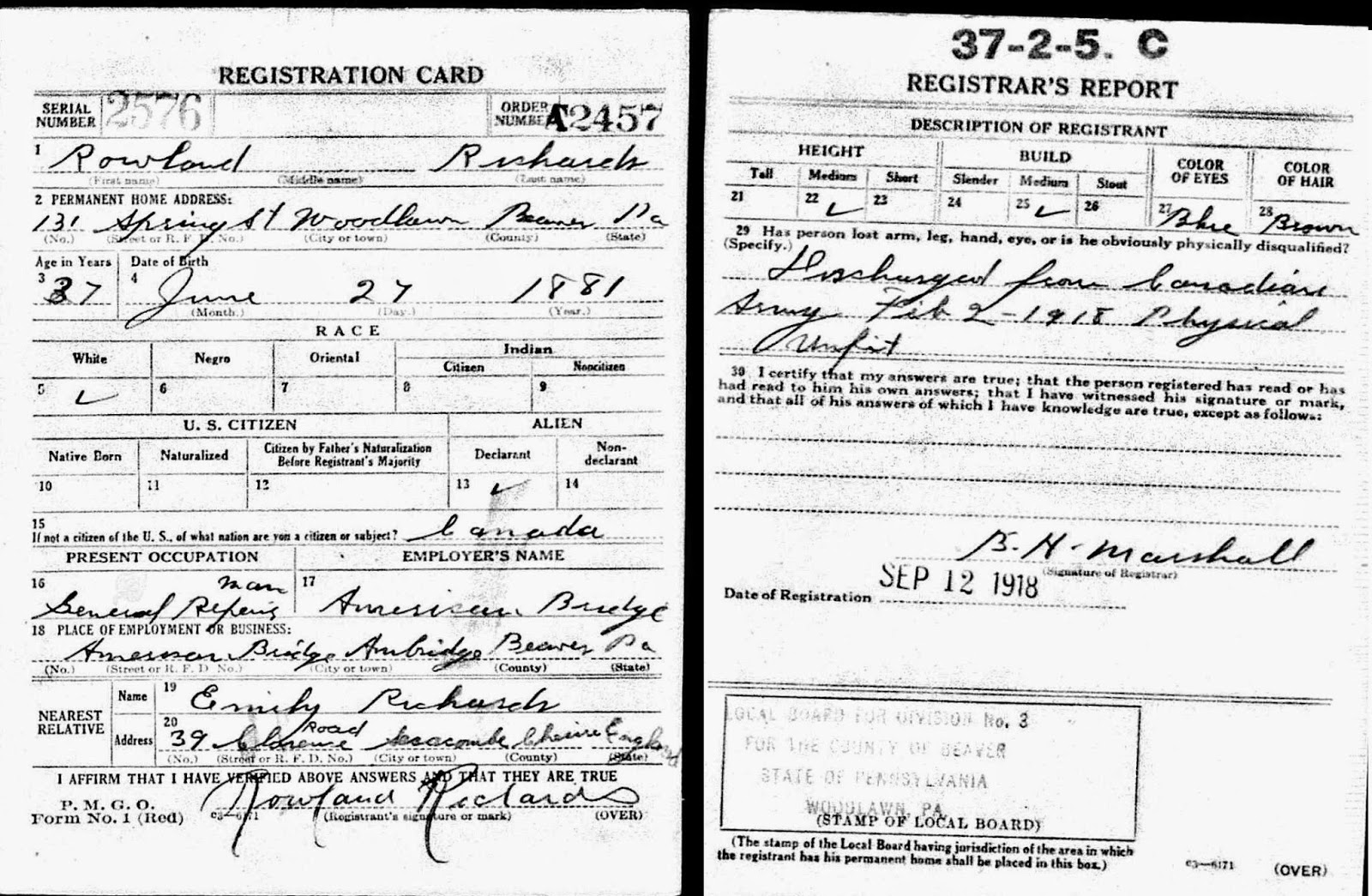 On April 12, 1918, Rowland filled in his World War I draft registration card.  He lists Emily as his wife and she is living in Seacombe, England.  They have now been apart for four years!  The card is revealing to me for my family genealogy.  Rowland is living at 131 Spring Street, Woodlawn, Beaver County, Pennsylvania--the home of my great grandparents John George and Elizabeth Hughes.  The Hughes Family moved from the South Side to the new Jones and Laughlin Steel Mill in Woodlawn about 1915.  Rowland is employed at American Bridge Company--the same place that my grandfather, George Henry Hughes, worked.  Plus Rowland must have served for a time with the Canadian Expeditionary Force during World War I and was discharged due to being physically unfit. My Grandfather Hughes aka Pop Pop, also served with the Canadian Expeditionary Force during World War I.  There must have been some spirited dinner conversation around the table at 131 Spring Street.

After a six year separation from her husband, Emily crossed the pond.  She was accompanied by her brother, William Christian Olesen and her mother, Ferdinanda Weiss Olesen.  Emily, age thirty seven boarded the SS Aquitania on July 19, 1920 in Liverpool, England and arrived at Ellis Island on July 24, 1920 meeting her husband Rowland Richards and going to her brother, Ernest Olesen's home, at 891 East 14th Street, Flatbush, Brooklyn, New York. (Ellis Island Records)  Unfortunately, Emily was detained on Ellis Island until July 27 due to illness. (Record of Detained Aliens page 219) Once she was released, Emily, Rowland, Bill and Ferdinanda (Ann) all boarded a train and headed to Woodlawn, Pennsylvania.

Now the information becomes somewhat sketchy. I have two Pennsylvania Census reports--1930 and 1940. Emily and Rowland owned a home during that time at 1223 Virginia Avenue, Monaca, Pennsylvania. I google mapped the address and the house is still standing. I remember my aunt mentioning it was a red brick...and it is. On the 1930 census both are listed as aliens. 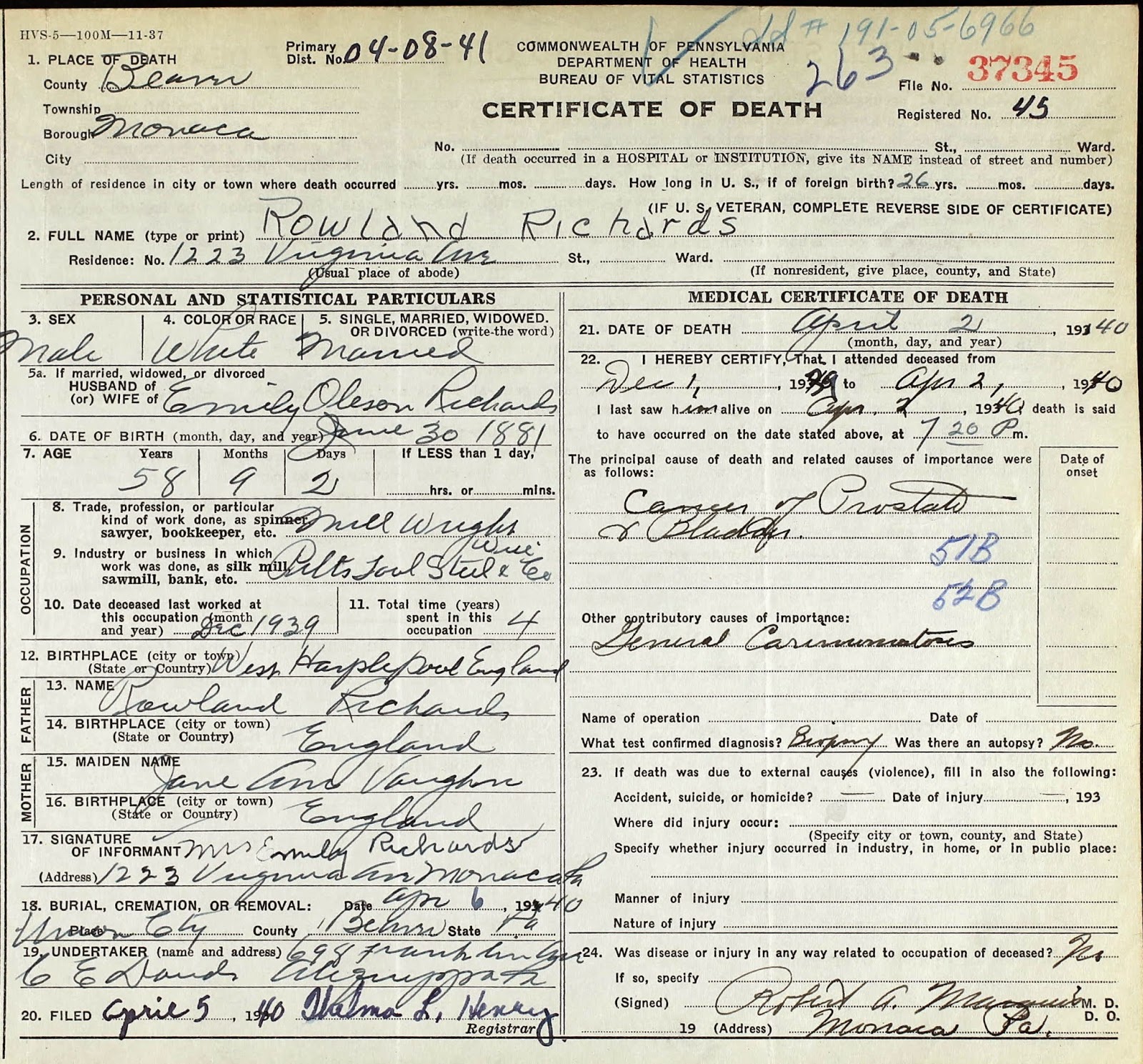 A curiosity was revealed when I located Rowland's death certificate.  He died at home on April 2, 1940 from prostate cancer and was buried in Union Cemetery, Monaca, Beaver County, Pennsylvania.  Oddly, on the 1940 Pennsylvania Census, taken on April 24, Rowland is enumerated.

Of note, on the 1940 census report both Rowland and Emily are listed a naturalized.  No date is given and I do not have a copy of their papers. 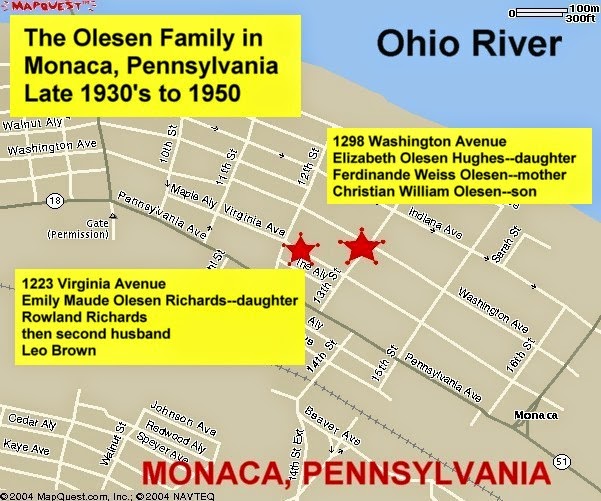 Sometime between Rowland's death in 1940 and her brother's death in 1946, Emily married second, Peter Leo Brown.  It was also his second marriage.  I have been told Leo owned a hardware store in Freedom, Pennsylvania across the Ohio River from Monaca.

Leo Brown died in Aliquippa Hospital at age 60 on August 16, 1957 from a stroke.  He is buried at St. John's Cemetery, Center Township, Beaver County, Pennsylvania beside his first wife, Florence Phillips Brown. 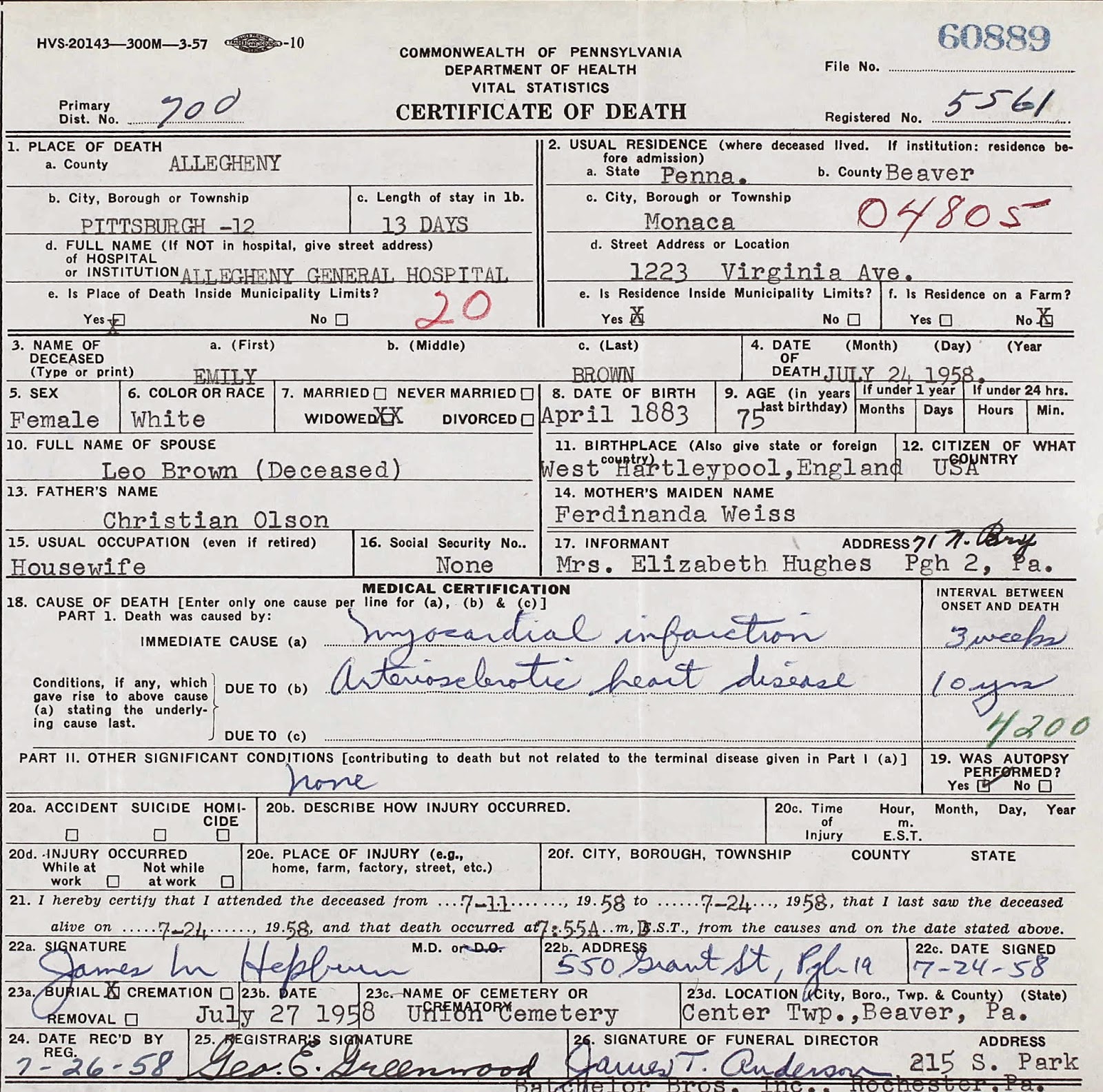 Although I was age eleven when Emily died, I have no memory of her.  I wonder if I ever met her?