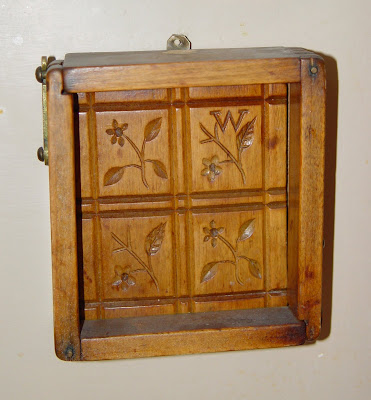 A dear family friend gave this antique wooden butter mold to my mother when we moved into the house on Bramble Lane in 1961. It moved to Ohio with my mother in 1982 and when she died in 1999, I kept it from her estate. I can remember that it was always was prominently displayed in her kitchen and brought back memories of her valued friendship. 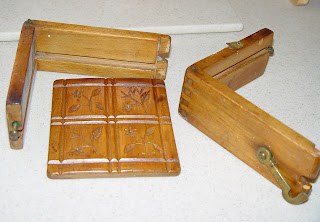 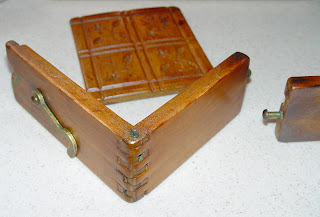 The butter mold comes apart and is three pieces--the carved back and two cornered side sections. The side pieces of wood are held together by a metal hooks which fasten onto metal screws. There is a groove inside the side pieces which holds the back in place. Over the years the hinging mechanism has become much looser and it is occasionally difficult to get it all back together. 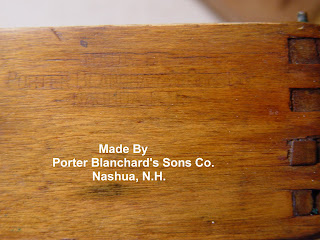 A a family history researcher, I could help but do a little poking into the Blanchard and Son's Company of Nashua, New Hampshire.
Quote from: Hall, Elton W., The Blanchard butter-worker, The Chronicle of the Early American Industries Association, Inc., September 2003 issue.

"The intensity of the labor in farming and dairying is well-known to all who have ever concerned themselves with it. Little wonder then, that ingenious mechanics have perennially sought ways to reduce the labor with machines to lighten whatever parts of the work they could. One such entrepreneur was Porter Blanchard. According to Barbara S. VanVuren, co-author with her husband Robert E. Van Vuren of Butter Molds and Stamps, Porter Blanchard opened a small workshop in 1818 next to his home on Main Street in Concord, New Hampshire.

In 1867, his two sons, Charles P. and George A., joined Blanchard in the business. Since about 1870, they had been in the business of manufacturing churns, butter molds, scales, thermometers, and other tools used in dairying. Porter Blanchard died in 1871, and in 21 February 1882 the firm, which was by then known as Porter Blanchard's Sons, was issued a patent for a new butter-worker which they believed to be better than any other device then on the market."

Our ancestors certainly knew a thing or two about serving "the food". Much better than putting a stick of butter on a plate or setting out a plastic tub of margarine, don't ya think ;-) And, yes, I have, on occasion, pressed butter into this antique mold and then slid the cake of butter onto an antique serving plate for the holiday table. Talk about presentation!!