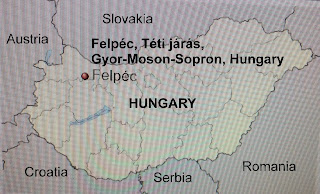 Elizabeth Bodo, listed as Lizzie Bodo, on her father's 1911 Petition for Naturalization, was born on May 26, 1908 in Felpéc, Téti járás, Gyor-Moson-Sopron, Hungary.  Elizabeth was the daughter of Alex Bodo and Julia Horvath.  I have not been able to locate her immigration documents, although she lists 1912 as her immigration.  That would coincide with the probable crossing of her mother.  Elizabeth would have been age four. 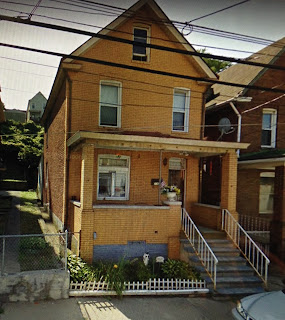 230 Fleet Street, Rankin, Pennsylvania
Alex Bodo owned the house located at 230 Fleet Street in Rankin and by 1912-1913, his family had immigrated from Felpéc, Hungary and were living there.  During the next four years, two or three daughters were added to the family.  There is a daughter listed on the 1930 Pennsylvania census; however, I am not sure she was born to Alex and Julia.  Alex, a widower then, remarried and that daughter may be the child of his second wife and her previous marriage.
Elizabeth was only age nine when her mother, Julia Horvath Bodo, died on December 20, 1917.  The census enumerator missed the family living at 230 Fleet Street on the 1920 Pennsylvania census, leaving a huge hole documenting this family.  I assume that Alex remarried soon after his wife died.  He needed someone to raise the youngsters, one child was a newborn.

Cleveland Buckeye-Woodland Area
The first record for Elizabeth, now using Bedo as her surname, is a birth record in Cuyahoga County, Ohio.  Her oldest brother, Alex Jr., also was living in Cleveland and perhaps they traveled there together.  Both were living in the Hungarian section called the Buckeye-Woodland area on the far east side of Cleveland.  The Bodo surname has been seen as Bedo and Bado within the family. 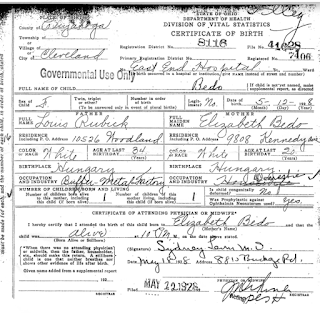 Shared from the genealogy files of Sheri Thibo
Baby Girl Bedo was born on May 12, 1928 at East  End Hospital, Cleveland, Cuyahoga County, Ohio.  Louis Rubik, 10526 Woodland Avenue, Cleveland, employed as a buffer at a metal factory is listed as the father.  Elizabeth Bedo, 9808 Kennedy Avenue, Cleveland, employed as a domestic is listed as the mother.  Baby Girl Bedo will be named Florence Rubik and then Florence Bedo and eventually Florence Viola Beckwith.
In 1920, Joseph and Julia Bedo, probably Elizabeth's cousin lived at 9808 Kennedy Avenue, Cleveland.  This is the same Josef Bodo who immigrated with Alex Bodo, Elizabeth's father, in 1903.  It may have been Joseph Bedo who encouraged Elizabeth and her brother to relocate to Cleveland.

1929 Cleveland City Directory
Elizabeth Bedo was employed as a maid.  The address 1558 Glenmont Road, East Cleveland is in the Coventry area.  It is listed as her residence.  I imagine she is live in help. 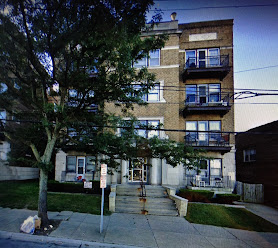 1930 Ohio Federal Census taken on April 19, 1930
Elizabeth Bedo, age 21, a single woman, is a servant in the rental apartment of attorney, William C. Rippner, located at 2808 Mayfield Road, Cleveland Heights, Ohio.  Elizabeth was born in Hungary as were her parents.  She immigrated in 1912 and is a naturalized citizen.  Elizabeth can read, write and speak English. 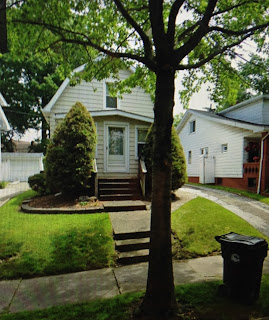 1930 Ohio Federal Census taken on April 15, 1930
Florence Rubik, age one and ten months, born in Ohio is a roomer at the home of Ernest J and Viola Bubel Meyer, 3267 West 127th Street, Cleveland, Ohio.  Viola Meyer boards children.  Florence's mother was born in Hungary; however, Viola did not know about her father, so she listed US.  There must have been a foster agency that placed Florence, to be cared for by the Meyers or Elizabeth knew the family through Hungarian connections.  What is odd is that the Rubik and Bedo families were on the far east side of Cleveland and little Florence is on the west side across Interstate 90 from Lakewood. 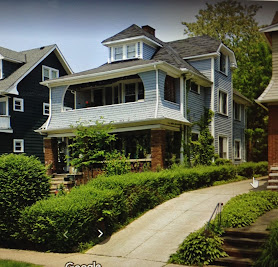 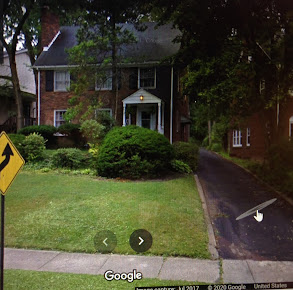 1940 Ohio Federal Census taken on April 30, 1940
Elizabeth Beds, age 32, divorced, is employed as a servant in the home of Alberto Christ, 2176 Edgerton Road, University Heights, Ohio.  She was born in Hungary and is a naturalized citizen.  She is listed as a maid in a private home.

1940 Ohio Federal Census taken on April 15, 1940
Florence Beddo, age 12, is a ward of Christian and Anna Bubel living on Chestnut Ridge Road in North Ridgeville, Lorain County, Ohio.  Florence has completed sixth grade and is in school.  She was born in Ohio.  She was living in the same house in 1935.
Why is Florence in North Ridgeville as a ward with the Bubels?  The Bubels are the parents of Viola Bubel Meyer, the woman Florence was living with on the 1930 census report.  What happened?  Viola's husband, Ernest Meyer died in 1935 and Viola unable to financially care for seven year old Florence, sent her to her parents to raise.
Viola, now a widow, was employed in Elyria, Lorain County, Ohio in 1935.  She may have been living with her parents then, traveling to work from North Ridgeville, and helping to raise Florence.  She met Rodger Yale Beckwith, a divorcee, also employed in Elyria, and they married on May 15, 1937 in Cleveland, Cuyahoga County, Ohio.
Soon after the 1940 census report, Christian Bubel died.  Rodger and Viola were living at 2209 West 83rd Street in Cleveland in 1940.  Sometime after 1940, it is believed that Florence Bedo, moved to Cleveland and began living with Viola again.  She then became Florence Viola Beckwith.
I believe, although she did not raise her daughter, Elizabeth Bedo did visit and spent time with Florence.  Perhaps she may have given some financial support from her work as a domestic servant in many east side homes.  From a personal history told to me, Florence did know of her Bodo family in the Pittsburgh, Pennsylvania area and probably of her Bedo/Bado uncles in Michigan and Washington, DC. 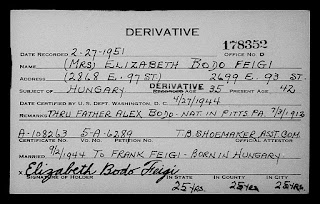 Elizabeth Bodo married Frank Feigi on September 2, 1944, probably in Cuyahoga County, Ohio. It is believed that it was Elizabeth's first marriage.  It was Frank's fourth.
This derivative for her naturalization, shows her father, Alex Bodo and gives his naturalization in Pittsburgh, Pennsylvania as, July 3, 1912.  She was grandfathered in through her father.  The document also shows that Elizabeth has lived in Ohio, Cuyahoga County and the city of Cleveland for 25 years.  That would have her in Cleveland circa 1926 at age eighteen.
Obituary of Elizabeth Bedo Feigi 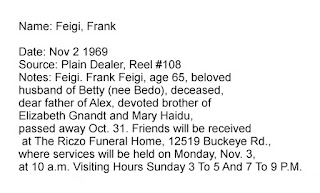