Walter C. and Blanche Edith Green Schickling are the great grand uncle and aunt of my Michigan cousins. Blanche is their direct ancestor, the sister of their great grandmother, Clara Green McGoey, wife of Michael Joseph McGoey of Clearfield, Pennsylvania. 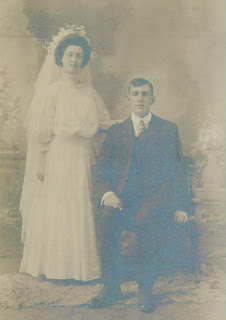 Photo found on the Internet and posted by Weaver
Walter and Blanche were married on March 31, 1907 at Saint Mary of the Assumption Church in Frenchville, Girard Township, Clearfield, County, Pennsylvania.

The Schicklings had eight children: Rosanna, Constantine J., Jane, Edward Clyde, Naoma Liney, Walter, Emile (who died at birth) and Sylvester, who was only seven months old when his father died. Walter was injured in a mining accident and died on October 30, 1917 in Clearfield, County, Pennsylvania. Blanche died nine years later on January 21, 1926 in the town of Clearfield, Clearfield County, Pennsylvania.

Walter, Blanche and a daughter, Emile, are buried in Saint Mary of the Assumption, Frenchville, Girard Township, Clearfield County, Pennsylvania.