When I am driving through small and larger towns I am fascinated by the turn of the 20th century architecture and building facades. Many of those that have survived the test of time have the building’s name and date carved in stone at the top. Today, many of those names have been highlighted with paint to identify the first tenant. I often wonder who owned the building and what was housed inside. This series of blogs will grow as I continue to photograph and research those that I see on my travels. 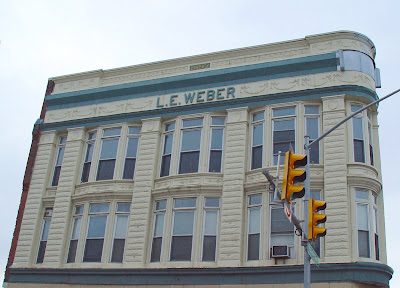 While on a recent summer vacation near DuBois, Pennsylvania I took this photograph of the L. E. Weber building located on the corner of North Brady Street and West Scribner Avenue. I do not know what is housed in the upper floors of the building, but on the ground level is an insurance company. The buildings exterior appears to have been cleaned and the name “L. E. WEBER” has been painted blue and the date “1897” highlighted. 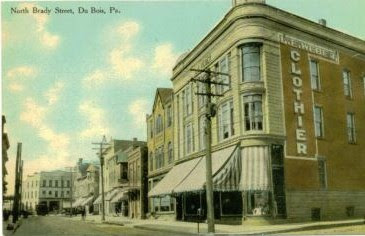 According to “Around DuBois” a postcard history book by the DuBois Area Historical Society, the L. E. Weber Clothier store, “…was originally located in a different building, but moved into this building on August 25, 1898, after the great fire of 1888 destroyed the business district of DuBois.”1 L. E. advertised his clothing store as “The Old Reliable.” His was not the only store to purchase clothes in DuBois, his business competitor was D. L. Corbett & Company.

The building was known in DuBois in the early 1900’s as the Weber Building and it did house other offices, not just the clothing store. There is a notice in a 1900 edition of the Dubois Morning Courier that the G.W. Tozier Insurance Company was relocating from the Weber Building to The Cannon & Hatton Building. It appears that insurance companies have been housed in the Weber Building since its inception. There was also a sizeable hall where various town events and meetings were held as mentioned in the town’s newspaper.

Their first census was in 1900 as a family and at that time they were living at 177 Brady Street in DuBois. By the 1910 report their address was 127 South Brady Street,3 where they lived through 1920. In the 1920 report, Ada and Mary are not listed.4 Perhaps they have married.

L.E. Weber was a member of the DuBois school board and was given his oath of office on Friday, April 13, 1900.5 The family was prosperous and had a female servant living in the home and she is enumerated in the census reports from 1900-1920.

By 1930, Lewis, Carrie and oldest daughter, Louise relocated to 356 Martel, Los Angeles, California. Louise is employed as a tutor doing private teaching for a family. Lewis is retired.6

This is the point that I lose track of the Weber’s. Perhaps when I return to the DuBois area next summer, I can add a photo of their home on South Brady Street and do some additional digging.