My Grandfather, World War I and ALOT of Bureaucratic Red Tape

My parental grandfather, George Henry Hughes, was born in West Hartlepool, England on March 19, 1898. In 1906 the family immigrated to the United States and began their new life on the South Side of Pittsburgh, Pennsylvania. Sometime around 1915, when the Jones & Laughlin Steel Company opened a new plant, called the Aliquippa Works, down the Ohio River from Pittsburgh, in Woodlawn, Pennsylvania, the Hughes family moved.

When the United States entered World War I, George was most anxious to serve. He immediately went to the nearest recruitment office and as the family story goes…he was rejected for active duty due to his poor eyesight. One might say that my grandfather was “hell bent” to serve, and decided if the Americans wouldn’t take him, that he would take a train up to Toronto, and enlist there. 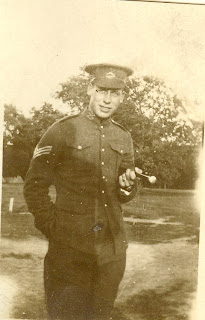 On August 1, 1917, George Henry Hughes mustered into the Canadian Expeditionary Force as a member of the 20th MGC (Machine Gun Company). He was trained on the Vickers Machine Gun and received his sergeant strips. What can I say….the US Army rejected him due to poor eyesight and the Canadians trained him on a machine gun!!!

I know of some of his service experiences as a letter that he wrote to his foreman at American Bridge Company (where he was employed as a draftsman) found its way into a local newspaper.

Following training his company was to be shipped to France, but at the last minute, Great Britain decided to send them to Siberia—Vladivostok, Russia. He saw a small amount of gunfire in Harbin, China, but was primarily stationed in Vladivostok.

George was honorably discharged on May 16, 1919 and returned to Woodlawn, Pennsylvania. 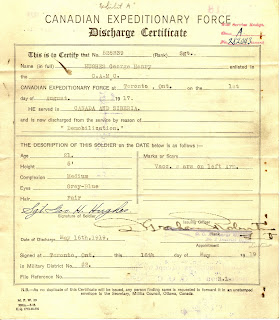 While Grandfather was serving in World War I, his father, John George Hughes, had made application for United States citizenship. Also listed on the application were his wife, Elizabeth, and his son, George. 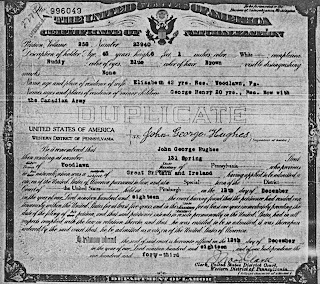 When George returned from the war, his father went to court to be certain that George was a United States citizen since he had sworn allegiance to the King when he enlisted in the Canadian Expeditionary Force. 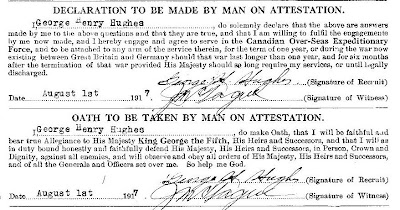 John died before the court acted on his petition, so Elizabeth and George continued the court process and in 1923, the court assured George that he was indeed a United States citizen.

George married the love of his life, had three successful children and a rewarding, lifelong, career as a draftsman for The American Bridge Company.

In the late 1950’s, my grandfather was preparing to retire and he and my grandmother were making plans to cruise around the world and relocate to St. Petersburg, Florida. Both applied for their passport. Imagine the look of shock and horror when George found out that he was NOT a citizen of the United States and could not apply for an American passport! He had been living in the US for over 50 years, paying taxes and voting and was not a citizen! My father poking good natured fun at his father, called him “the alien” which was not met with humor in return.

Apparently the court ruling of 1923 was rescinded, but no one bothered to tell my grandfather. The process began again. After filing numerous papers to no avail, my grandfather finally received his citizenship through a rider to a congressional bill, added by Congressman Robert J. Corbett, from the 29th district in Allegheny County, Pennsylvania. It read, “George Henry Hughes received his citizenship on December 12, 1918.” 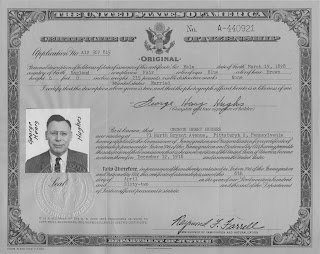 My grandfather’s certificate of citizenship is dated April 6, 1962 and the plans for the trip around the world were a success.