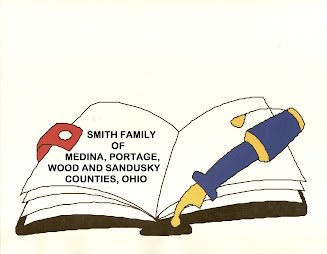 I'm going out on a limb with this blog.  As any genealogy researcher knows, tracing the Smith surname is a challenging task.  I figure even if this Mary Ann Smith does not connect to my husbands Smith family, at least research is out there about them.
From information written in the Smith Family Bible and shared with me over a decade ago, Abner C. Smith and his wife, Sarah Mott Smith added a daughter to their growing family named Mary Ann, born on April 2, 1825, probably in Medina County, Ohio.
As I followed the census reports, one of their three daughters, Harriet, Mary Ann and Sarah, was not enumerated in the 1840 Ohio census.  In the age range of 15-20, one daughter, Harriet or Mary Ann is either deceased or married.  I have not been able to find a marriage or death record for either of them dated before 1840 in either Portage or Wood County, Ohio that matches their age or residence profile.

However, there is a marriage record in Wood County, Ohio dated October 14, 1844 between Mary Ann Smith and Hubbard H. Cross.  No additional information is offered; no ages, parents or township.   Abner and Sarah's daughter, Mary Ann would have been nineteen; Hubbard age twenty six.  I did locate the minister, George Cronenwitt (Cronenwett) on Ohio censuses.  He was a pioneer missionary minister of the U.S.Evangelical Lutheran Church in America.  Between 1840-1888, he served thirteen settlements in Wood, Sandusky, Ottawa and Lucas Counties in Ohio. 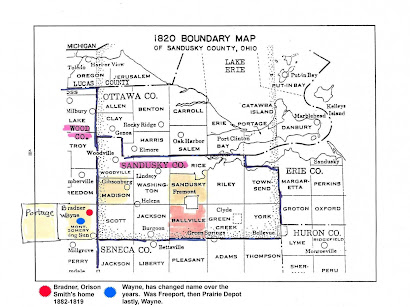 There is a 1840 Ohio Census record for a Hubbard Cross as a farmer in Ballville Township, Sandusky County, Ohio.  Was Hubbard H. Cross' father also named Hubbard?  There is a white male and female age 50 to under 60.  One male in 10 to under 15, one male 15 to under 20 and one male 20 to under 30  (Hubbard H. Cross would have been age 22 in 1840.  To date, I have not found any other mention of this family.
The next record for the Hubbard and Mary Ann Cross family is the 1850 Ohio Federal Census.  The first US Census that lists the names of each family member along with some personal information.  On September 23, 1850, in Scott Township, Sandusky County, Ohio, H.H. Cross, age 32, a farmer with 200 value of personal property owned, born in Canada East; Mary Ann, age 25, born in Ohio; a daughter, Sally A, age 4, born in Ohio and a son, Geo W, age 3, born in Ohio.  Mary Ann, daughter of Abner and Sarah Mott Smith would have been age twenty five in 1850.
The 1860 Ohio Federal Census, Ballville Township, Sandusky County, page 218 contains the Cross enumeration.  Hubbard A. Cross, age 44, a day laborer, real estate value 100, born in Canada; Mary Ann, age 38 born in Ohio; Sarah A., age 14, born in Ohio; Platt B., age 7, born in Ohio; James H., age 2, born in Ohio.  George W. Cross is missing from the family listing.

Official Roster of the Soldiers of the State of Ohio in The War of the Rebellion 1861-1866, Volume 6, page 105.
The Cross family was not immune to the growing conflict in the United States in 1860.  Hubbard enlisted on November 16, 1861 with Company F, 72nd Regiment, Ohio Volunteer Army for a three year term.  Interestingly, three of Abner C. Smith's sons, Mary Ann's brothers, are also enlisted in the same company and regiment in the same month at the same place in 1861.
Hubbard mustered in as a private on February 18, 1862 at Camp Chase, Ohio.  He died of disease almost four months later on June 12, 1862 at Monterey, Tennessee at age 40.  One record lists his burial was at Pittsburg Landing, Tennessee.  Another shows a name change from Pittsburg Landing to the Shiloh National Cemetery.  Grave markers have been erected there; however, sadly, there is none for Hubbard. 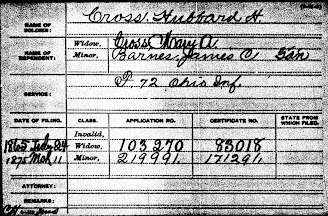 There is a pension file for Hubbard originally filed by his widow, Mary Ann.  Of interest a minor, James C. Barnes, son or grandson applied or reapplied for the pension on March 11, 1875.  I have had no success in figuring out who he is--where he fits into the family tree..  Purchasing a copy of the pension file would help.

On February 28, 1867, the Senate and House of Representatives of the United States Congress granted Mary Ann Cross, of Fremont, Ohio pension money due her from the pension filing backdated to her husband's death .  It could be that originally she received no pension since he only served for four months before he died; however, she appealed to Congress, either on her own or through a lawyer, and she was granted pension money (The Statutes at Large, Treaties and Proclamations of the United States of America From December 1865-March 1867, Volume 14, Ed:  George P. Sanger, Boston: Little, Brown, and Company, 1868, page 631).
It appears that Mary Ann Cross was deceased by 1870.  I found the two children that seem to have survived; Sarah A. Cross and Platt B. Cross, enumerated with the Nicholas Bowlus family having a Fremont Post Office, in Sandusky Township, Sandusky County, Ohio.  Sarah was employed as a domestic and Platt working on the farm.
Sarah married Lewis Henry Bowlus, son of Nicholas, in Toledo, Ohio in 1874, moved to Kansas and had four children.  Lewis deserted his family in April 1883.  There is a pension record submitted by Sarah to try to secure funds for Lewis' service in the Civil War.  She lists his desertion and that her brother is supporting her family.  Sarah, known as Sally, raised her four children alone.  Sarah died in 1916 in Kansas.
While researching Sarah, I found another Cross child, a younger sister to Sarah and Platt.  Mary E Cross was born October, 1860 in Fremont, Ohio.  She did not appear on the 1860 census report which was enumerated on June 12, 1860.  I could not find a 1870 census for her.  Mary is enumerated directly under the Lewis H. Bowlus family in the 1880 Kansas census report.  She may have been a housekeeper for her older sister, Sarah.  Around 1884, in Kansas, Mary E Cross married Harry Thomas Bowlus, son of Lewis Henry Bowlus and his first wife Minnie.  Harry was living in his father's home in 1880.  Mary married her sister's stepson.  Harry and Mary had five children.  One died before 1900.  Mary E. Cross Bowlus passed in Topeka, Kansas on October 16, 1938.  Her brother, P.B. Cross is mentioned in the obituary.
When I was next able to locate Platt B. Cross, it was his 1900 Kansas Census Report.  He married Lora Belle Holden in Kansas about 1894.  Platt lists his birth as March 1855.  Around 1918-1919, Platt and family moved to Texas to grow cotton. By 1930, Platt had decided to go back to his carpentry skills.  The total number of children born to this family was eight, with one dying before 1900.  Platt Bush Cross, born March 2, 1855, listed as a farmer, died on April 5, 1941 in Louise, Wharton County, Texas, as listed on his death certificate.
Done and done.  Down a rabbit hole I went with this.  There are plenty of additional descendants.  I have seen other folks researching this family group on Wikitree and Ancestry.  In the end, I have no proof that Mary Ann Smith is even the daughter of my husband's paternal ggg  grandparents; however, the search has been fun and I welcome anyone who is also digging into these families to post a comment.