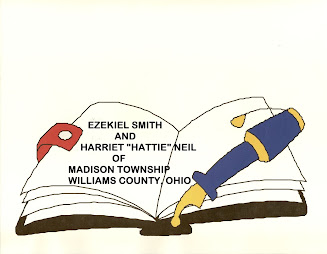 Ezekiel Smith, undoubtedly named after his maternal great grandfather, Ezekiel Mott, was the son of Abner C. Smith and Sarah Mott.  Ezekiel, born on February 16, 1832, in Deerfield Township, Portage County, Ohio, joined a family of three sister and a brother.  Abner was a farmer and as Ezekiel grew older, he would have been helping his father with the farm.  Around 1838, when Ezekiel was five, the Smith family packed their worldly goods and made the journey to Portage Township, Wood County, Ohio.  The 1840 Ohio census lists them in Portage Township; however Abner is shown in a history book as an early pioneer of Montgomery Township in Wood County.  Suffice is to say, the 1850 Ohio census report shows the Smith family farming in Montgomery Township.
By 1860, the Smith family had removed to the Fremont, Sandusky County, Ohio area.  Abner was farming a piece of land in Sandusky Township.  Ezekiel is listed as twenty five years old and working on his father's farm. 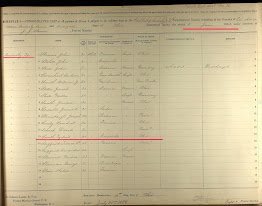 During the next five years the Smith family paid the ultimate price in war.  There are Civil War records for William and Ezra, who were killed in action, Orison and Augustus who served and honorably discharged and a list of Sandusky Township males who could serve in the army, that lists Ezekiel.  To date, I have not located any data that shows Ezekiel actually served in the Civil War.  This June, 1863 document lists Ezekiel as age twenty eight, a carpenter and married.  I have found only one Ezekiel Smith in Sandusky Township during this time and I have not found any marriage documents for him from 1860-1863. 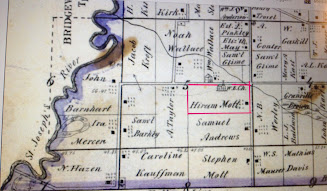 Families did welcome visiting family members, especially farmers who could then enlist the men's support with work.  Looking at the 1870 Ohio Federal Census I was surprised to see that Ezekiel had traveled almost to the Indiana border to visit/live with his maternal uncle, Hiram Mott.  Hiram, a farmer and a pioneer of Williams County, Ohio was probably thrilled to have Ezekiel's help. 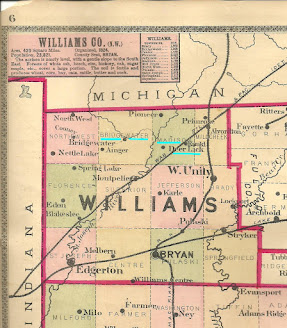 The map of Williams County shows it is the Ohio county to the far north west in the state--Michigan to the north and Indiana to the west.  I underlined Madison Township and Deer Lick, which is the nearest post office to Hiram Mott.  The township directly to the west of Madison is Bridgewater, where the Joseph Neil family lived for several decades.
Harriet E. Neil was born in Bridgewater Township, Williams County, Ohio on December, 1851.  She was the oldest daughter born to Joseph Neil and Sarah Bowen.  Joseph Neil was a farmer, carpenter and itinerant minister.  By 1870, he was a full time minister. 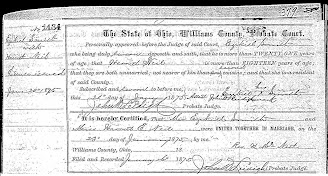 Ezekiel decided to make Madison Township his home.  He probably stayed on his uncle's farm.  On January 23, 1875, Ezekiel Smith married Harriet "Hattie" E. Neil in Williams County, Ohio.  Almost twenty years separated the newly weds.  Ezekiel was forty two and Harriet, twenty three.  Ezekiel signed the certificate with an "X".  I found it interesting that Harriet's father, a minister, did not marry them.
The next record for Ezekiel is the 1880 Ohio Census.  It does answer some questions I had regarding Ezekiel.  In particular, where did he set up his new family?  To back track two years, his uncle, Hiram Mott, died on June 15, 1878.  His will is on Ancestry.  He leaves his worldly goods to his wife, Sarah. his two sons, Lewis O Mott and Celie E Mott and his daughter Mary K. Andre.  No mention is made of any portion of his estate to be given to Ezekiel Mott.

I have not found a birth record for Ezekiel and Harriet's first born, Sarah A. Smith circa 1876.  However, their second child, a daughter, Elsie Smith, born on June 30, 1880 in Madison Township, Williams County, Ohio does have a birth record.  There are birth records for two sons.  Martin Smith born on August 23, 1883 and Charles Smith born on May 28, 1888.  Both boys were born in Bridgewater Township, Williams County, Ohio.
An educated guess is that Sarah Mott died between 1880 and 1883, the farm land was sold, thus leaving Ezekiel without a place to live and house his family.  Harriet's parents were living in Bridgewater Township and perhaps the Smith's moved in with them.  Joseph Neil, Harriet's father was a farmer and although on the 1880 census his son, Joseph Neil, Jr. is enumerated directly under his father as a farmer, there is always a need for help.
Here ends the story of Ezekiel Smith.  He was alive and with his family in 1887 to conceive his son.  Did he leave his family?  I have found no further census records.  Did he die at age fifty five?  I have found no death records or grave markers.
Harriet, age 40, remarried on June 15, 1892 in Williams County, Ohio.  Her new husband, Andrew J. Miller, a 51 year old farmer had returned to Williams County, Ohio from Clear Lake, Steuben, Indiana following the death of his first wife, Rosannah Martin Miller.
Andrew and Harriett settled in Bridgewater Township, Williams County, Ohio.  They had one son, Irvin Harry Miller, born on January 3, 1894.  Andrew's six adult children had married or moved elsewhere by the 1900 Ohio census.  Andrew is a farm laborer.  Harriett lists five children with only four alive.  Her oldest child, Sarah A. Smith is enumerated on the census with her mother and step father.  Her youngest son, Irvin is also enumerated.  Martin Smith died in 1947.  I think I found a census record for Elsie Smith in 1910 and a death record for her in 1928.  That leaves Charles Smith. 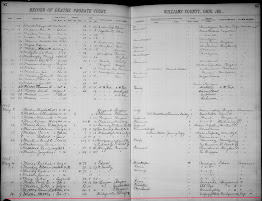 Harriet, listed as Hattie, died on February 17, 1908 at the age of fifty six in Bridgewater Township, Williams County, Ohio.  Where was she buried?  Beside Ezekiel Smith? Beside her second husband, Andrew Miller?  There have been no grave markers identified for either Ezekiel or Harriet. 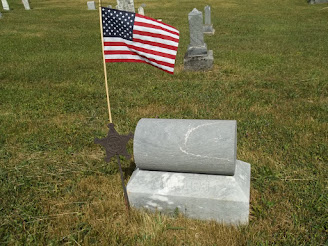 Andrew J. Miller died on December 16, 1910 at age seventy in Bridgewater Township, Williams County, Ohio.  There is a grave marker for Andrew at Cogswell Cemetery, Bridgewater Township, Williams County, Ohio.  Andrew served in the Civil War enlisting on August 12, 1862 and mustering out on June 28, 1865.
Addendum
Anyone who researches Smiths knows the difficulty piecing the family together.  Like their father, Ezekiel, all seem to be lost in space except Martin Smith.   Sarah A. Smith had a final census report in 1900, enumerated with her mother and step father.
Elsie Smith, I may have found!  There is an Elsie Smith as an inmate/cook living at the Williams County Infirmary in Jefferson Township.  Also living there are two of Hiram Mott's sons, Lewis and Celie.  Elsie would have been born on their family farm.  There is a listing on the 1920 Infirmary census for a Smith and it appears the first name begins with the letter "E".  Finally, I located a death record for an Elsie Smith on January 23, 1928 in Williams County, Ohio.
Martin Smith relocated to Marion, Marion County, Ohio.  On May 25, 1912, he married Hazel McClung.  Martin and Hazel raised two children, Beulah and Donald in Marion.  Martin died on March 26, 1947 in Marion and is buried in Marion Cemetery.