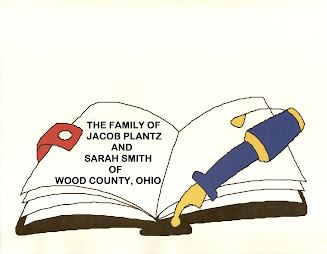 Blended families were not unusual in pioneer days.   There are accounts of  spouses abandoning their family.  Women did not always survive child birth.  Various diseases were left unchecked due to a lack of physicians and medicine.  Some died during battle or at the hands of Native Americans defending their land.  Wild animal attacks were not uncommon.  This is one of those blended family stories.

Sarah Smith, daughter of Abner C. and Sarah Mott Smith, at the age of seventeen married a twenty seven year old widower, Jacob Plantz (Plants), on December 8, 1844 in Sandusky County, Ohio.
Jacob had traveled from Pennsylvania, settling in Wood County, Ohio.  He married Mary Kiser on April 2, 1840 in Wood County, Ohio.  Three children were born, Emmanuel, Mary (Polly) and Samuel.  I am assuming that Mary died leaving Jacob to care for his three children and farm his land.  A young woman, Sarah, walked into her first marriage having to care for three young children, ages four, two and one.   Fortunately, as one of the oldest in her own family, she undoubtedly was helpful in caring for her younger siblings.  She had training.
During the first ten to fourteen years of her marriage, Sarah's parents were living nearby.  She was able to visit, see her siblings who were still living at home, and have help and advice from her mother.
Jacob and Sarah added seven additional children to the Plantz family; Roena born in 1845, John born in 1847, Rosanna born in 1850, Harriet born in 1853, Amanda born 1855, George Wesley born 1858 and Alma born 1868.  There may have been additional children who were stillborn and/or died young.

There is a wonderful reference to the Plantz and Smith families in the 1875 Hardesty's Atlas of Wood County, Ohio, page 47EE.  The biography of Jacob Plants outlines his siblings, Sarah's family and his own family.  Published in 1875, both Jacob and Sarah were alive to supply information.  I do want to mention that Orison Smith did not enlist in the 72nd Regiment.  He enlisted in the 111st.
Following the census reports.  In 1850, the Plantz family is enumerated in District 154, Mongomery Township, Wood County, Ohio.  Jacob is a farmer with $900 of real estate owned.  The Abner C. Smith is also enumerated in the same district.  Jacob, a farmer living near Prairie Depot, Montgomery Township, Wood County, Ohio, has enlarged his financial value by 1860.  The value of his real estate is $3000 and personal estate is listed at $300.  The Smith family had removed to the Fremont, Ohio area by 1860.  I wonder if Jacob purchased his father in laws land?
Continuing to add financial wealth, Jacob, a farmer, living in the Prairie Depot area, in 1870 has $7000 personal real estate and $500 in personal estate.  The 1880 census does not give the post office, so I can only surmise that the Jacob Plantz family continues to farm his land near Prairie Depot.  Personal wealth is not given in this census.  Both Jacob and Sarah are literate.
The call of young men to serve the northern cause of the Civil War did not escape the Plantz family.  The three oldest sons all enlisted in union armies.
Emmanuel Plantz, served as a private with Company I, 72nd Regiment, Ohio Volunteer Army and died of a gunshot wound on April 8, 1862 in Tennessee.  One record lists his burial was at Pittsburg Landing, Tennessee.  On the website, the Pittsburg Landing name was changed in 1888 to Shiloh National Cemetery.  Grave markers have been erected there; however, sadly, there is none for Emmanuel.
John Plantz served as a private with Company F, 13th Infantry, Ohio Volunteer Army.  He enlisted on April 6, 1866 in Toledo, Ohio and was discharged on September 24, 1866.
Samuel Plantz enlisted as a private with Company B, 55th Ohio Infantry.  He was honorably discharged. 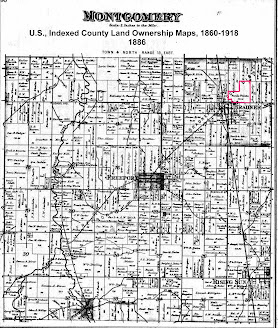 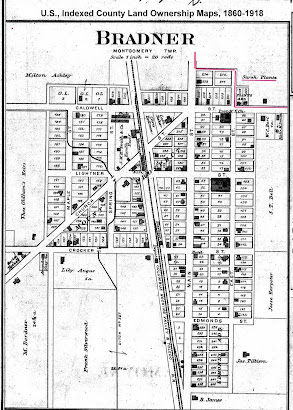 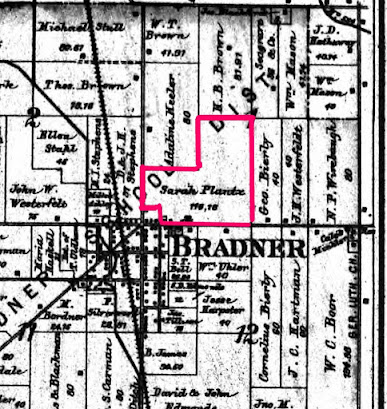 These two 1886 Land Records show that Sarah Plantz was the owner of 11?.78 acres in Bradner, Wood County, Ohio.  Oddly, there are no such records for Jacob. In many cases, women are listed as land owners after their spouse died.  That is not the case here.  I also wonder when the Plantz family removed to Bradner as the 1860 and 1870 list them as farming in Prairie Depot, Wood County, which is Freeport on the larger map. 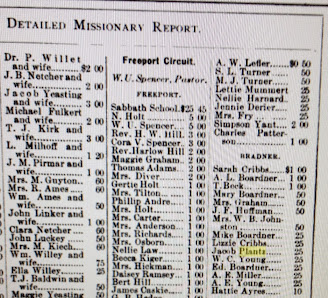 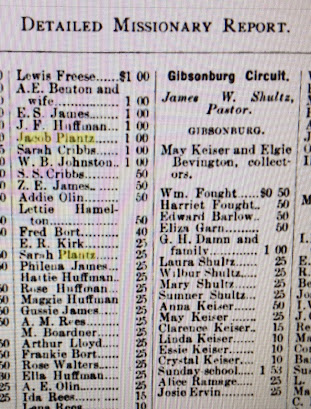 Jacob and Sarah were involved with the Methodist Episcopal Church in Bradner giving financial support to the missions program.  Copied from the book, Minutes of the Central Ohio Conference of the Methodist Episcopal Church Held at Trinity Church, Lima, Ohio, September 25-30, 1890. Jacob is listed on page 708 and the page with both Jacob and Sarah listed is on page 523.  Both listings are for Bradner, Wood County, Ohio. 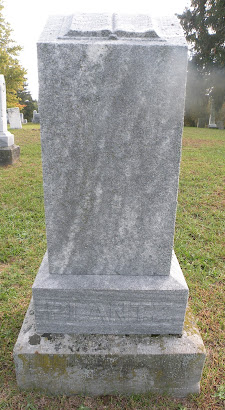 Sarah Smith Plantz died in Bradner on February 16, 1894.  She is buried in Bradner Cemetery, Bradner, Wood County, Ohio.  Jacob had one additional census report, 1900.  He is enumerated with the family of his youngest child, daughter Almira Plantz Kelly.  The family is living in Bradner, where Jacob died on August 7, 1902.  He is buried beside his wife of fifty years.
I have not covered the marriages of the Plantz children and their descendants.  All information is readily available on Ancestry.