I seem to be finally getting around to blogging about my Olesen roots.  To be fair, I have only had bits and pieces of research until recently, especially on the two who remained in West Hartlepool, England.

This lady, Ferdinande Weiss Olesen, did immigrate to the United States and lived with several of her adult children in Aliquippa and Monaca, Beaver County, Pennsylvania area.  She is my paternal great great grandmother.

So many names.  It is somewhat difficult to actually know what her first name was.  I have seen Ferdinande, Ferdinando, Ferdinanda.  Nickname--Ann, Anne, Annie.  Comparing the documents I have found to date, it appears that my great great grandmother was called Ferdinande in England and it changed to Ferdinanda when she lived in the United States.  When she signed her marriage license, it was Ferdinande.

Ferdinande was born on November 14, 1855 in Hamburg, Germany.  Her parents were Frederick Heindrich Adolph Weiss and Ferdinande Lehman. She joined brother, Adolph Herman W. Weiss. I do not know when the Weiss family immigrated to England, and in particular to the town of Hartlepool, They are enumerated as residents there on the 1861 census.  Oddly, Ferdinande is listed as 18 months old on that census, which would make her birth date about 1859 and not 1855.  Later census reports and her marriage license show her birth year to be 1855.

Ferdinande's father was employed in various shipping positions in Hartlepool, which was an important business industry during the Victorian era to this active port town.  It also appears that the Weiss family had boarders in their home for additional income.  The boarders were also involved in the shipping industry.

On November 27, 1870, when she was fifteen, Ferdinande's father died.  To provide income for the family following his death, son Adolph was employed as an apprentice to an outfitter and Ferdinande worked as a dressmaker.  Additionally, three male boarders were living in their home on Victoria Station, Stranton, West Hartlepool, England.  One of the three, Christian Invart Olesen, married Ferdinande four years later.

On August 30, 1874 Christian and Ferdinande married at Christ's Church, West Hartlepool, England.  The marriage license gives a glimpse into my family genealogy.  Both of the father's names are listed for the newly weds.  The two people who signed as witnesses are Ferdinande's brother, Adolph Weiss, and Mary Middlemass  This couple married two years later.  Both Christian and Ferdinande were literate and could spell their name.  Of note:  My paternal great great grandmother's name is spelled Ferdinande with the final e written over.

Seven children were born to Christian and Ferdinande:

From various newspaper articles found in both Hartlepool and Middlesbrough, England, it appears that Ferdinande did not lead a calm domestic life.  Her husband, Christian's ship chandler business, was bankrupt by 1877.  Several articles indicate that he had a volatile temper that lead him to serve time doing hard labor.  Her eldest son was also in trouble with the law, brought before the local court and served time doing hard labor. One 1894 article exposed him as threatening her and the police were summoned. She also had to deal with the sorrow of losing to young sons.

Ferdinande's husband died on October 17, 1892 from somewhat mysterious circumstances.  From newspapers articles, he left for work in good health, stopped at the Victoria Hotel for a whiskey while waiting to catch a train for Middlesbrough.  Before he could enjoy his drink he dropped over dead. The cause of death was ruled syncope. 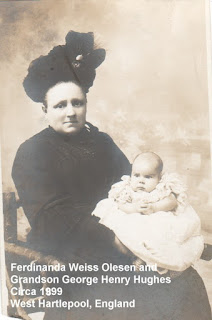 On March 19, 1898, George Henry Hughes, Ferdinande's first grandchild was born, in West Hartlepool, England, to her daughter Elizabeth Ferdinande Olesen Hughes and her husband John George Hughes.  This is my link to the family.  George Henry Hughes is my paternal grandfather and John George Hughes and Elizabeth Olesen Hughes are my paternal great grandparents.

The Olesen family lived at two different residences on Bolton Street during the 1890's and early 1900's.  To provide for the family, Ferdinande worked outside the home.  Son, Bill was employed as a sawyer (a person who saws lumber) and daughter Emily, a dressmaker.


My guess is that this photo was taken in the front yard at 7 Bolton Street in West Hartlepool.  Unfortunately, Bolton Street no longer exists, so I was not able to see the house when I visited in 2003.

Immigration of the Olesen's to the United States

On May 8, 1906, Ferdinande's daughter, grandchild and son in law (the Hughes family) left Liverpool, England for the United States.  Bill, Emily, Ernest were still living at home.  A year later, Elizabeth and nine year old son, George Henry returned to West Hartlepool for a visit.  In July 1910, Elizabeth Hughes returned to West Hartlepool and her brother, Bill Olesen accompanied her back to the United States. At that time Ferdinande was living at 73 South Parade in West Hartlepool.

On February 26, 1920, son Ernest (Ernie) along with his wife Ann and young son, Oscar sailed from Liverpool, England for the United States and made their home in the New York City area.

Bill Olesen crossed the pond and prepared for the final crossing of the Olesen's.  This included Ferdinande, her daughter Emily Olesen Richards accompanied by Bill Olesen aboard the Aquitania on July 1920 leaving Liverpool and arriving in New York City on July 24, 1920.  Emily was detained due to illness.  The family stayed with Ernest Olesen and family in Brooklyn until Emily was well and able to travel to Woodlawn (now Aliquippa, Pennsylvania).  Son, Frederick Olesen remained in England. 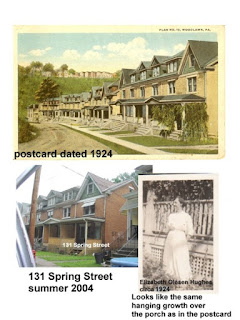 It must have been a full house at 131 Spring Avenue, Woodlawn, Pennsylvania.  The house was owned by Jones Laughlin Steel Company (a company home) and rented to John George Hughes.  In the house lived, John, Elizabeth and George Hughes; Bill Olesen; Ferdinande Olesen; Emily Olesen Richards and her husband Rowland Richards.

Following the death of John George Hughes on May 20, 1921, the Olesen family remaining at 131 Spring Avenue were Elizabeth Olesen Hughes, Bill Olesen and Ferdinande Olesen.  From the 1940 United States census, it appears that the group remained at the home in Aliquippa at least until 1935. Bill Olesen was also employed by J&L Steel. 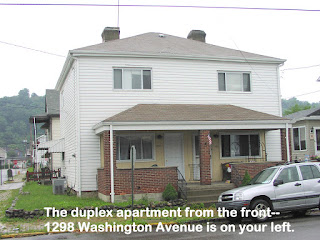 By the 1940 United States census the family had moved to 1298 Washington Avenue, Monaca, Beaver County, Pennsylvania.  Stories and memories of this house have been supplied to me by my Aunt Faith, who lived here from about 1946-1950.  She does remember both her great grandmother Ferdinande Weiss Olesen, her Grand Uncle Bill Olesen and Grand Aunt Emily Richards/Brown.


On February 15, 1942, Ann Olesen died at home in Monaca, Pennsylvania at the age of 87.  She is buried in the Hughes family plot, Woodlawn Cemetery, Aliquippa, Beaver County, Pennsylvania. 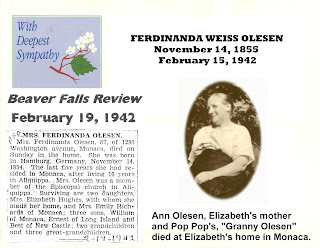 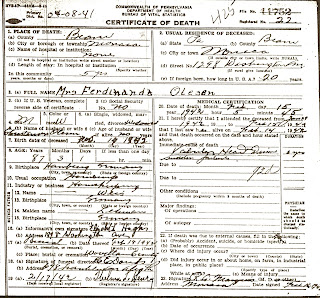