This was my childhood home.....my parent's first house.  We moved here in the fall of 1950.  I do not know how much influence my parents had in designing this house or if it was built and they purchased it.  It was a small three bedroom, one bath house.  There was a basement and a one car garage.  When my folks moved in, it was a family of three.  In the fall of 1951, Dad was called into service in the Korean Conflict and was stationed at Camp Carson, Colorado.  At the end of December, Mom closed up the house and she and I traveled by train out west to Camp Carson.  Ken was born on the Army base on February 12, 1952 and we lived there until after my fifth birthday on May 1.  Mom, Ken and I returned to Washington Drive so I could begin Kindergarten at Perrysville Elementary School near our home.  Dad returned for a brief time in the summer of 1952 and then left for Korea.

As I mentioned in a previous blog, family times seems to bring back memories.  So many of mine revolve around this house and street.....my elementary and junior high school years.  I decided to do a little background search on the property.  Whatever did we do before the internet and it's development over the past decade.  I plugged in Perrysville, Pennsylvania and was easily able to find maps and also a few answers to some nagging questions that have been hanging around in my mind for, whew.....many decades ;-) 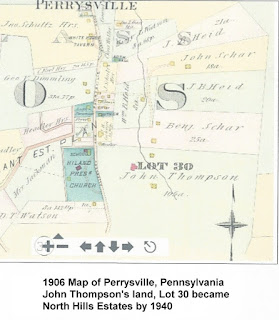 Well, here we are.  1906.  Hiland Presbyterian Church, my childhood church, listed on the map and Perrysville, Pennsylvania with numerous businesses and farming lands.  My childhood home was located in a 1940 plan called North Hills Estates.  Believe me, the homes there were NOT estates, just comfortable family homes.  The land in the 1906 map belonged to John Thompson and is listed as Lot 30.  Checking another map that takes the view down into the borough south of Perrysville, West View, John Thompson's land stretched down to West View.  A goodly majority of the Thompson farm was sold by 1940 to developers and it became North Hills Estates.

Of course I had to do a little research into the Thompson Family.  I was not able to determine who John was or who he "belonged" to.  There was an early John Thompson who settled in Ross Township.  Perrysville was located in Ross.  It appears from an article I found, that the older Thompson lived in what is today Shaler Township. John and his wife, Ellen Davis, were the parents of fourteen children who lived to maturity.  (Cushing, Thomas, A Genealogical and Biographical History of Allegheny County, Pennsylvania,Genealogical Publishing Com, Jun 1, 2009, page  744).  The land on Lot 30 could be additional land formerly owned and deeded by John Thompson the parent or to his son, John Thompson.

There is a Thompson Cemetery (listed on Find A Grave as Oak Grove Cemetery) in Shaler Township.  Ross Township was at one time part of Shaler.  Later in life I lived off Thompson Run Road....again, same Thompson family.  And when living in North Hills Estates, one had to drive or walk down Thompson Drive to get to our street.  Odd that as we moved to our second home, we still were close to the pioneer Thompson family land. 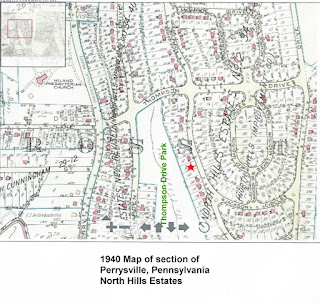 Moving ahead to 1940 and a map showing the development of a new housing plan called North Hills Estates.  The 1906 John Thompson Farm was across Perry Highway from Hiland Presbyterian Church and then ran south along Perry Highway.  Thompson Drive, named in honor John Thompson, former owner of the land, divides North Hills Estates.  The red star marks the lot that my parents purchased and in 1940, no house had been built.  As I mentioned earlier, I am not certain if our house was already built and my parents bought it or if they had some input into its design.

Of great interest to me was finding that the woods behind our house actually had a name....Thompson Drive Park.  This woods was my entertainment for most of my elementary school years.  We just called it "the woods".  Who knew it had a proper name....lol    I know every kid who lived on Washington Drive spent countless hours playing in the woods and in the creek that cut through it.  A little additional research did not give me a name for that creek....yet ;-)  however, I did follow it to Girtys Run.  Our creek appears to be a feeder water that flowed into Ginty's Run and eventually through Millvale and into the Allegheny River. 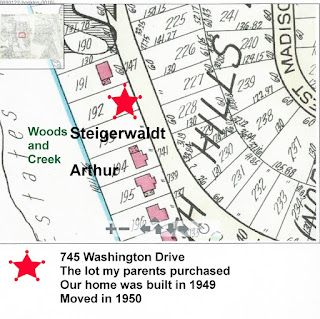 Lot 192 became 745 Washington Drive.  A house we lived in from 1950 until my parents built a new house in McCandless Township which we moved into in 1961.  Several houses on my street were already completed in 1940.  The house beside our lot belonged to the Woodward Family when we moved in.  Dorthy Woodward operated a dance school in her basement for many years and I was a member of her school during my elementary school years.  The Arthur's home was also already standing in 1940.  The Arthur's purchased their house from a previous owner since Joe Arthur and my Dad were in their freshman year of college in 1940.

When I was researching this blog, I decided to google search the address of our Washington Drive address and was happily surprised to see it recently sold and there was a zillow listing with PHOTOS!  Certainly there has been some updating over the decades; however most of the interior features remain.

A Hughes classic photo.  The three of us seated in front of the fireplace in the living room for a Christmas photo in 1956. 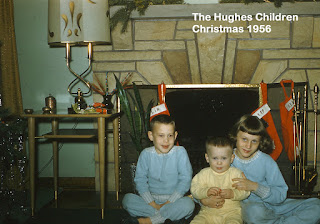 Photos showing the front of house when we lived in it and more recently.  Shutters are a nice addition.  Still deciding about the cover over the front porch ;-) 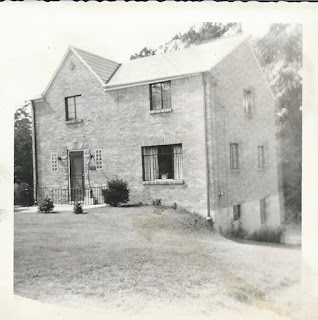 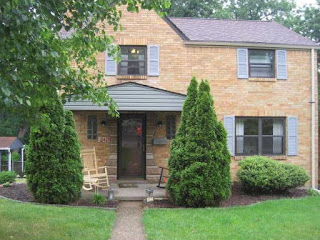 Talk about a walk down memory lane.