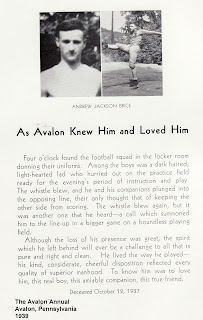 Andrew Jackson Brice, born about 1921 in Pennsylvania, was the son of Andrew E. and Emma C.Brice. The family is enumerated on the 1930 Pennsylvania census and are living on 925 Jackman Avenue in Avalon, a town in the Pittsburgh area on the Ohio River.

I found nothing on the web regarding Jack Brice and his football accident at Avalon High School back in 1937. Perhaps it has been lost in history. I am not living close enough to Pittsburgh to go through the local Bellevue-Avalon newspapers to have a better understanding of the events leading up to and following Jack's death.

Both of my parents attended Avalon High School and likely were friends with Jack. Especially my Dad, as he was the quarterback for the school's football team and was present when the accident occurred. Jackman Avenue is near the street where Dad lived and isn't that far from the house where Mom grew up. Certainly, if Jack is enumerated at age 8 on the census, he probably attended school with Mom and Dad until his death.

My remembrance of this event was that Jack suffered a head injury during football game and died. As Dad once told me, it was back in the days when there was very little protective gear for a football player to wear...especially head gear.

As a memorial to Jack, the athletic department decided to award the best football player each year with the Jack Brice Medal. The first one, given in 1938, was awarded to my Dad, George VanGilder Hughes. 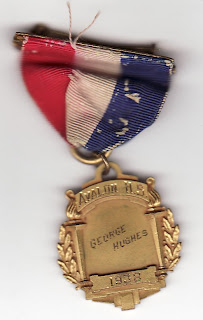 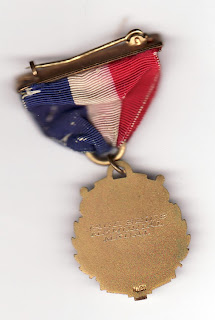