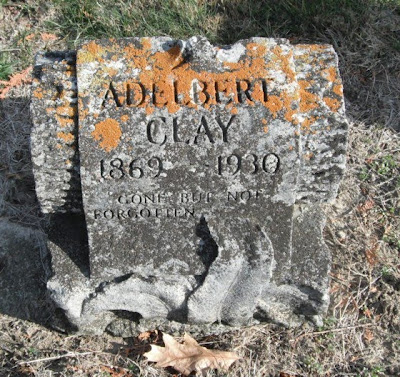 Flipside followers will know why I captured this little tombstone with a photograph......although, it is not a tree shaped marker, it is a little piece of a tree.....a log marker ;-)

Adelbert Clay is buried in Attica Venice Cemetery, Attica, Seneca County, Ohio. After doing some research on Family Search, death certificates show that there are numerous other Clay family members also buried in Attica Cemetery. Unfortunately, I did not photograph them.

Adelbert Clay, son of Amos Clay and Meanda Easterbrook, was born in Republic, Seneca County, Ohio on September 30, 1869. I was able to locate Adelbert and his wife Mary in the 1930 Ohio census and he is listed as the owner of a gas station in Republic, Ohio. I have been through Republic countless times and there is currently a gas station at the corner of Route 18 and Route 4. There are also old buildings on Route 19 where it crosses Route 18 that could have once been gas stations. Checking earlier census reports, it appears that Adelbert was married first to a woman named Flora and they had a son, Charles D. Clay, born in April, 1899, in Ohio. 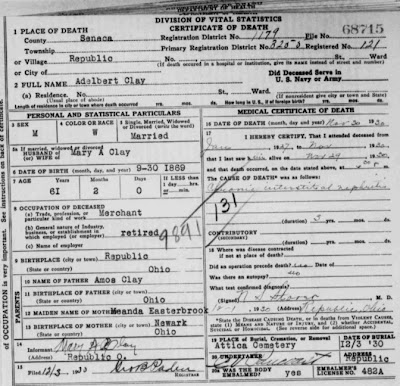