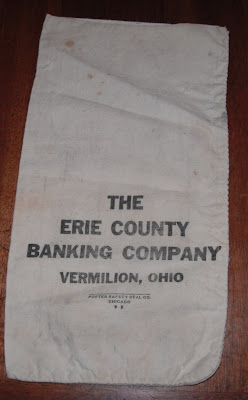 Yet another find from the condo. As clean as this money bag is, I am sure Helena gave it a good wash and press before packing it away with a note tucked inside identifying the importance of the piece. 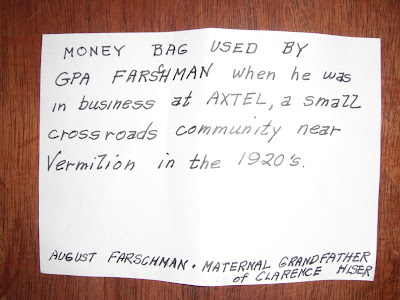 As listed on the note, the money bag belonged to August C. Farschman, paternal great grandfather of my husband. August was the son of Gustave Julius Albert Farschmin and Eva Hass of Lorain, Lorain County, Ohio. He was married to Amanda Agnes Kutza, daughter of Julius Martin Kutza and Ida Hermine Kroll also of Lorain.

The Farschman's were the parents of four daughters: Caroline, Eva, Anna and Viola. Eva married Orison Hiser--they were my husband's paternal grandparents.


August C. Farschman
Circa 1939
August was a businessman. While living in Lorain, Ohio in the early 1900's, he owned and operated a candy and tobacco establishment. For a brief time ( 1915-1916)moved his family to Cleveland, Ohio, where he purchased a storefront and operated a billiards and confectionary store. The family returned to Lorain after the death of their young daughter, Anna, who died on from pneumonia on Feb 25, 1916 at age thirteen.

After returning to Lorain, Ohio, August was employed at the National Stove Company from 1916-1920.

Between 1922-1932 August owned and operated a grocery store and gas station in Axtel, Ohio at the southwest corner of Route 60 and Mason Road.

I have no information whether August contined to work after 1932 or perhaps he retired. He died just shy of his 76th birthday on November 19, 1950 at the home of his daughter, Viola Farschman Harris, in Vermilion, Erie County, Ohio.