And the topic for the 100th edition of the Carnival of Genealogy is... "There's one in every family!" Bring your stories of colorful characters, unique heirlooms, mouth-watering recipes, most dearly beloved pets, whatever! Interpret as you like. Every family has "special" individuals, you know, the ones with a green thumb, the black sheep, the lone wolf, the blue-ribbon cook, the story-teller, the geek! I know you have treasured recipes and amazing heirlooms you've yet to share! Thank you to Jasia Creative Gene for all her years of managing this carnival. I am pleased to submit this blog to assist you in achieving your goal of 100 blogs for the 100th edition of COG.

My husband has a cast of characters in his family tree. I am often envious...lol For this carnival I decided to tell the tale of paternal great great great grandfather, Walter Knapp of Fremont, Sandusky County, Ohio. 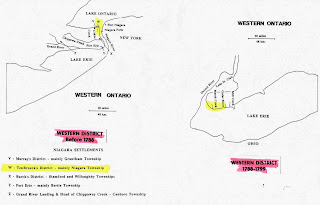 Walter came to Fremont by a circuitous route. His father, Benjamin Knapp, was a British Loyalist and was given land in Ontario, Canada for his service. From 1783 to 1803, the next generation of Knapp's was raised on this land located in what was called the West District of Ontario.

Walter was the last child to be born in Canada. His brother Isaac, was born in Detroit, Michigan in 1795. The Knapp's are listed in the 1820 United States census as residents of Detroit.

The subject of this story, Walter Knapp, was born in 1794 in Canada, the son of Benjamin and Katherine Knapp. From various accounts in Sandusky County History books, Walter and his younger brother, Isaac, had removed from Detroit, Michigan and were living in Lower Sandusky (now Fremont), Sandusky County, Ohio by 1814. 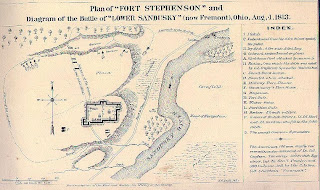 In the book, "Sandusky County and Representative Citizens,"there is mention on page 247 that Isaac and his son, Walter (this is actually his brother, Walter as Isaac was not married and had no children in 1814) were mail carriers on a route from Lower Sandusky where Fort Stephenson was located, then along the Portage River to Fort Meigs (now Perrysburg, Ohio). It was a somewhat dangerous route as Indians and wild animals would hide in the woods and attack the letter carriers.

I had to chuckle when I saw Walter listed as "Isaac's "lion hearted brother," in History of Sandusky County. Apparently, Walter's skill while delivering the mail was due to his light weight and fast speed. He was able to walk across the frozen ponds without breaking the ice during the winter months.

I could probably stop my story here as Walter certainly showed his courage and fortitude while employed as a mail carrier; however, there is more to his tale.

Following the War of 1812, Walter found an occasion to speak somewhat disrespectfully of the British government and was thrown in prison in Sandwich, Upper Canada, a town across from Detroit. (another account lists Windsor as the town where the prison was located.) Brothers, Isaac and James, planned to go to court and pay Walter's fine; however, the court never called Walter's case and he was left in prison for another year. Isaac and James made a decision that they would go to Sandwich and rescue their brother.

In the dark of the night, Isaac and James, in a canoe, paddled across Lake Erie where they put in a mile from town. They made their way through the streets of Sandwich until they came to the jail where Walter was imprisoned. They tried to saw through the bars on the window, but the saw broke. Next they found that the front door was locked and finally they went around back and were able to scale the high fence. The back door to the jail was unlocked and Isaac and James entered.

They found Walter, who told them where to find the keys. James went into the jailer's apartment room and fumbled around in the dark for the keys. While grabbing them, they fell to the floor with a crash, waking the jailer up from his deep sleep. The startled fellow jumped out of bed in search of the intruder. Isaac told him, in a low voice, that they were there to get a prisoner.

Fearful for his life, the jailer assisted in "breaking Walter out of jail." Walter was weak from his confinement and needed assistance to get over the fence. Once the three brothers were out of the prison, the jailer began shouting which woke up the townspeople. Isaac and James, assisting Walter, ran as fast as they could until they came to the canoe. When they reached the middle of Lake Erie, they were able to slow down, relax and continue on to the other side and freedom.

Walter and Isaac both remained citizens of Fremont, Ohio until their deaths. Isaac became famous as an associate county judge, while Walter lived in a rural portion of town and was a farmer. To be fair, the historical accounts of the Knapp brothers are listed under Isaac's name as he was a prominent citizen in the county.

Finding these accounts of my husband's ancestor was exciting and fascinating. And the story doesn't end here.....there are still more tales of the Walter Knapp clan.