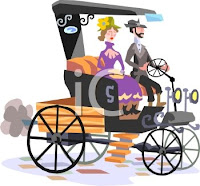 Yesterday my brother, Ken, and I took our annual trip south into the Ohio Amish heartland-- the counties of Wayne, Homes and Ashland. We have made this pilgrimmage for at least five autumns now and each time there is always something new to see and photograph. This year was no different. We DO go to the same place for our meal--The Barn Restaurant in Smithville, Ohio and the same place to shop--The Pine Tree Barn outside Wooster, Ohio. And we do continue down Shreve Road ending up in Nashville, Ohio and continue on to Loudonville. That was pretty much the trip yesterday. 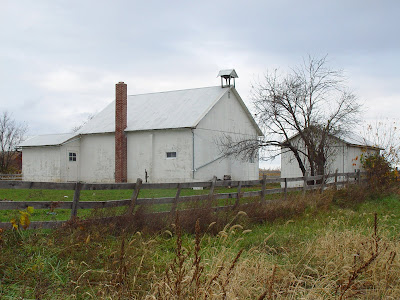 However this year we went south on Ohio Route 301, through the small village of Spencer. Ken knew of an Amish school on Black River School Road. We found it easily and Miss Snap Happy leaned out the car window and captured it on the Sony memory stick. As we were leaving a young Amish man was walking out of his nearby house to see what we were up to. 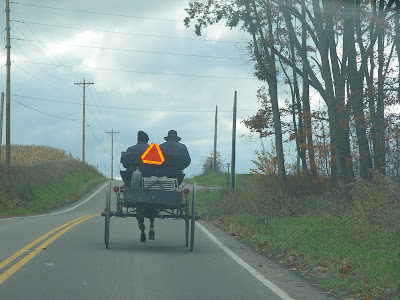 We continued on down Route 301 passing through several additional Amish areas. Being respectful of their privacy, I contained my urge to photograph Amish buggies, houses, farms, people, etc. The one above was shot out the front window of the car.

We made a stop at Wooster College in Wooster, Ohio and walked around the campus for about an hour. It was sunny, but freezing. Our mother, Martha Stark Hughes was a Wooster grad and my oldest son attended for one year before transferring to Ohio State. 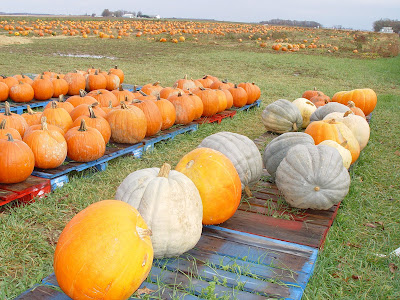 Somewhere between Wooster and lunch, we stopped at Ramseyer Farms pumpkin patch. What in the world do they do with all those left over pumpkins? After all, the day of our trip was Halloween and there weren't too many folks in the parking lot. 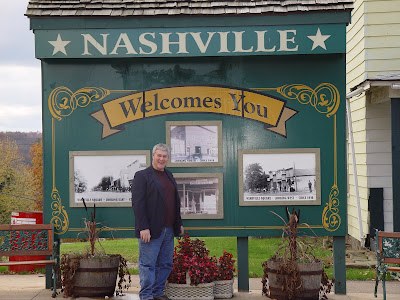 Following lunch and shopping we headed south. I persuaded Ken to pull over in Nashville, Ohio so I could take a shot of him standing in front of the sign.....what tourists! 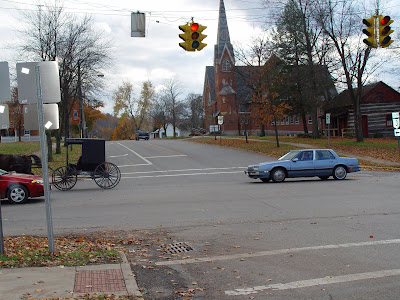 The final destination on our middle Ohio tour was Loudonville. I have waxed eloquent about this stop in my previous blog--SNGF--Halloween, however, I guess a little background wouldn't hurt here. Several years back, when Ken and I took this same trip, we happened upon the little village of Loudonville--gateway to Mohican State Park. We were fascinated by the Halloween parade of young folks. They were walking up and down the main street in costumes and all the merchants were sitting outside their stores passing out candy to the trick or treaters. Ken and I vowed that someday we would be a part of that parade. 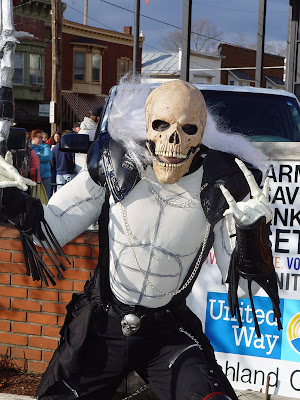 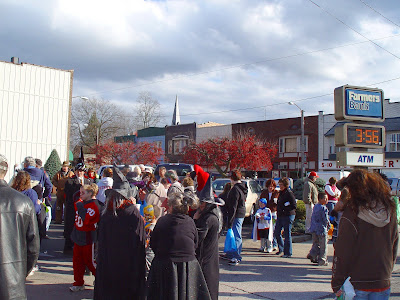 This year we planned the trip for Halloween hoping to catch the festivities in Loudonville. We made it just in time, although the M.O. had changed a bit. Instead of a parade, the children were all dressed and met in the parking lot of one of the local banks for a costume contest. Everyone won a prize and I would guess that the merchants all donated the goodies inside the prize bags.
Free donuts and apple cider were offered to everyone in attendance. It was a glorious ending to our perfect day.


Returning to the Cleveland area, we traveled part of the way on the Old Lincoln Highway, Route 30. Ken and I have a fascination with it. One summer we traveled on another section of the old highway in southern Ohio and on into Pennsylvania. 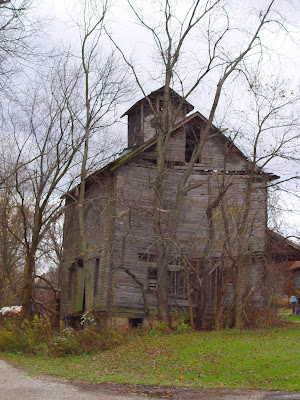 "Scene" along the way home was the village of Funk, Ohio. Ken actually had to turn around and drive back so I could get a photo of the road sign and an old school house that was along side the road.
We never tire of this autumn trip and already have planned 2010.
Posted by Linda Hughes Hiser at 11/01/2009 06:28:00 PM