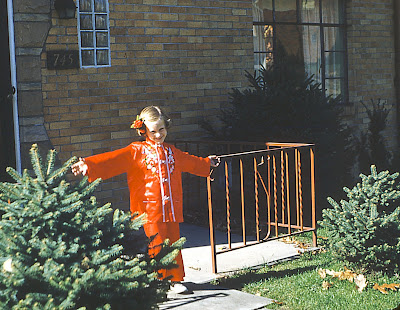 Randy Seaver over at Genea-Musings has challenged us this Saturday to remember a favorite Halloween. I can't remember a specific one, but rather, my memories are of all the Halloween trick or treats I had when the family lived on Washington Drive, in the north hills area of Pittsburgh, Pennsylvania. It was my elementary school years.
My brother, Ken, and I were just reminiscing about them today as we were driving around in Amish country, Ohio. One of our stops was Loudonville, Ohio to watch this village's annual Halloween celebration for their children. In years past, the kids would trick or treat walking up and down the town main street during the afternoon and the various merchants would have treats for them. A safe Halloween celebration.
Today we found that the celebration now consists of a band concert and then a costume judging with various age groups represented. All the participants received a prize bag filled with goodies. The younger age groups were so adorable in their little costumes and their shy looks when they walked up to receive their prize. This is small town Ohio at its BEST.
Driving back home, Ken and I began to trade Halloween stories from Washington Drive. Those Flipside readers who grew up in the 50's probably all had similar experiences. Trick or treating until late at night.....filling up several bags full of goodies--the regular sized candy bars not these minis that the kids get nowadays.....neighbors who had hot chocolate and donuts to serve to the kids (we were actually invited into their home).....homemade popcorn balls and candy apples that we weren't afraid to eat.....making and using a handmade contraption that whirred against a glass window and made an awful sound (created from a wooden thread spool that was knotched on the edges with toothpicks or wooden matches on either end that were connected by a rubberband).......cloth masks attached by elastic bands that became pretty grimy after one wearing......and finally, my Mom going through the bags of candy and picking out all the Hershey chocolate bars after we had gone to bed.
It was a good time to be a kid at Halloween.
Photo: Linda in a Japanese outfit that was purchsed for her by her Dad while he was serving in the Korean War. I still have it.
Posted by Linda Hughes Hiser at 10/31/2009 09:13:00 PM