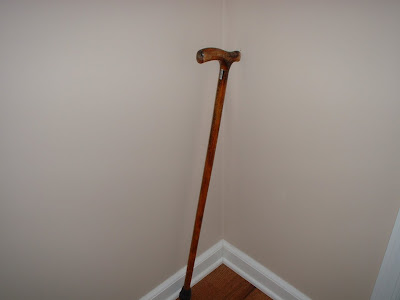 Although only about 45 to 50 years old, this cane is a precious family item. It originally belonged to my maternal grandmother, Martha Marie Frederick Stark, aka Teek. She suffered from rheumatoid arthritis and in her later years needed the cane for support.

Teek is pictured here with the cane the day of my wedding on August 16, 1969.
After her death in 1971, the cane became the property of my mom, her daughter. Mom was also a victim of arthritis and used the cane in her later years. My brother Jeff, tells the humorous story of the cane and May 23, 1978. Apparently after my first son, Aric, was born, Jeff found the cane, tied a big blue bow on it with the sign--GRANDMA--and presented it to Mom.
After my Mom's death in 1999, the cane was passed on to me. I used it for years as a prop in my Little Folks Theater class. It was the the favorite of the young thespians. My Mom was active in theater from high school and into her old age, both on the boards and as an audience member. It somehow seemed fitting to use her cane with the upcoming generation of actors.
Now the cane rests against a wall in my dining room....currently a decorative piece, but I know the day will come when I will also use it as that old arthritis gene has unfortunately come down to me.
Posted by Linda Hughes Hiser at 11/19/2009 08:58:00 PM