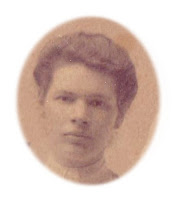 Lida is my paternal great grandaunt. She was born on April 26, 1873 in Morgantown, West Virginia, the daughter of John Oliphant VanGilder and Mary Louise Hill1. She was one of 11 children born to the VanGilder’s.

Lida’s dream was to teach. Following her public schooling, she enrolled at West Virginia University and graduated with a Bachelor of Arts degree in 18972. She and her sister, Emma, taught at the Union School in Easton, West Virginia, located north of Morgantown.

In 1902, Lida wrote a paper titled, 'The County School” and presented it at a teacher’s institute held at the Union School on January 17, 19023. Lida emphasized in her paper the virtues of a country school education and how new, more advanced courses have been added over the years. She hoped that the teacher’s pay would keep pace with the city school teachers and more classes added would be added to the country school curriculum to keep pace with the city schools. 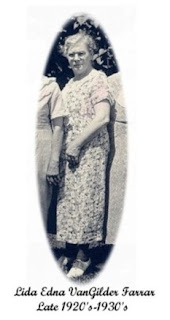 By 1920, the Farrar family had relocated to North Alexander Township, Athens, Ohio, where Henry farmed5. In 1928, Henry and Lida sold their farm and moved to 138 North Lancaster Street in Athens. Henry was working as a carpenter in 19306.

While living in Athens, Lida was very active in the local Methodist Church and the Temperance Union.

She died on June 15, 1946 in Athens, Ohio7. She is buried in Morgantown, West Virginia, but to date, I don’t know which cemetery. 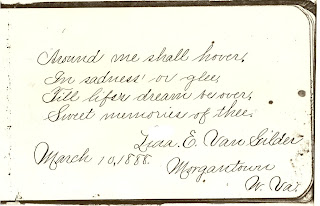