The topic for the 73rd edition of the Carnival of Genealogy will be: The Good Earth. Were your ancestors sharecroppers or land barons? Perhaps an ancestor was a logger or a miner. Do you have stories of homesteading? Is there a master gardener in your tree? If your ancestors lived in the city did they keep a square foot garden or escape the city to a favorite park? Tell us about your family's ties to the land! Apple will host the next edition of the COG on Apple's Tree.

My paternal gggg grandfather, Sampson Smith Frum, was, at his death, the largest land owner in Monongalia County, West Virginia. Sampson was the son of William Frum and it is believed his mother was Anna Smith (I have also seen her listed as Mary Ann Smith on ancestry.com). He was born on January 27, 1790 in Frederick County, Virginia in the Back Creek area.1 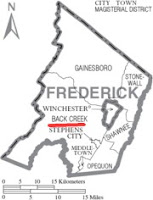 To date no records have been found to prove the name of his mother. The dilemma stems from the records in Frederick County, Virginia of the Jeremiah Smith II family. There is no record of the marriage of William Frum to a Smith woman. There is a will belonging to Samuel Smith, the son of Jeremiah II. Samuel mentions all of William Frum’s children in the will. The son’s are bequeathed sizeable tracts of land and in 1803 my ancestor, Sampson Smith Frum, was given the 200 acre farm of Samuel Smith.2 Other brothers, sisters, nieces and nephews are also listed in the will giving rise to the feeling that the Frum children were also relations.

Several years ago someone sent me a rather interesting website that has a memoir entitled, Notebook of Aristotle Smith, Eden, West Virginia, that puts forth the story that Samson (Sam’s son) Frum was actually the son of the bachelor, Samuel Smith and Anna Frum.3 Oddly, the Frum’s had two sons with similar names: Samuel Samson Frum and Sampson Smith Frum. The recollection of Aristotle Smith is that Samson Frum removed to Taylor County, West Virginia. In actual fact, the Frum son that lived in Taylor County was Solomon Frum. It’s difficult to know just how much credibility to give to the story; however it does provide a new slant to the Frum/Smith mystery.

During the War of 1812, Sampson was a Lieutenant from Monongalia County, (West) Virginia. He resigned the position in 1817.4. At one time there must have been a marker on or near his gravesite with the 1812 listing. When I visited the cemetery, there was no indication of his service. Fortunately, there was a cemetery reading back in the 1940’s, long before the cemetery was partially destroyed. 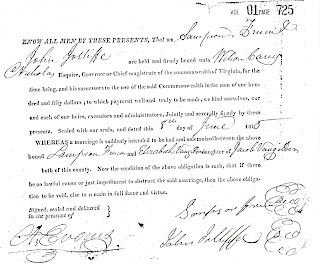 At an early age, Sampson realized the value of land and began purchasing parcels in and around Morgantown, often with his father. From 1817 until 1853, Sampson Smith Frum purchased 1279 acres of land primarily in Monongalia County, (West) Virginia. He owned the largest acreage of any single individual in the county at his death in 1862.6

According to research done by a relation of mine, Dr. Robert Poole Wilkins, livestock and farming were Sampson’s primary interests. “He found little market for his cattle in Morgantown, so he moved them east to Baltimore. The cattle were driven by foot with the resting place on his farm near Winchester, Virginia, before moving on to Baltimore and many being exported to Europe."7

In Sampson's will the following property was disposed of:8 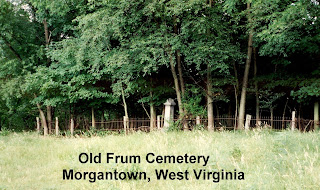 Sampson, Elizabeth and some of their children and descendants are buried on a hillside overlooking Aaron Creek on land that once belonged to Sampson. His wife, Elizabeth was the first to be interred in The Old Frum Cemetery. Sampson Smith Frum died on his farm on November 13, 1862 at the age of 72 years, 10 months and 16 days.9 A listing of those buried in this small family graveyard is on findagrave.com.