I have spent time blogging about my maternal grand uncle, Alfred Walter Stark, in years past.  From all my Mom told me, he was quite a character.  Before she died she asked me one day, "I wonder what ever happened to my Uncle Walter?"  I was not blogging when she died in 1999 and frankly not all that much genealogical information was available on the net.  Now, all that has changed.  With the 1940 census and other new information out on ancestry and elsewhere, I have been able to fill in a few of the empty blanks.


I am still missing one critical piece of information--the maiden name of his wife!  Walter and Frances Stark did not have any children; however, perhaps someone will find this blog on line and might have a Frances married to an Alfred Walter Stark, who often was listed as A. W. Stark, and one of my brick walls will crumble.

Six years ago for a Carnival of Genealogy:  Uncle Uncle meme, I wrote a lengthy piece about Uncle Walter, including several photos.  I will probably repeat some of the information here.  With more research and additional finds on line, I decided to seriously update this blog.
Born Alfred Walter Stark on May 15, 1884 in the Lawrenceville neighborhood of Pittsburgh to Charles Stark and Wilhelmine Catherine Schwarz Stark.  Alfred was called Walter by family and friends.  There are two blogs on Flipside covering first, his mother and father and second, his mother's widowed years.  Those also have information on and photographs of Walter's early years up until he married Frances.
Alfred is listed on the 1910 Pennsylvania Federal Census as age 25, single and working as a photographer in a studio.  It is unknown as to whether he is working for a company or the studio is his own.  (Year: 1910; Census Place: Avalon Ward 3, Allegheny, Pennsylvania; Roll: T624_1292; Page: 6A; Enumeration District: 5; Image: 913)
page 2036

Walter Stark took a portrait photograph of his married sister, Emily Beatrice Stark Miller and her husband, Howard Herron Miller circa 1912.  The embossed corner:  Stark Studio, 106 Federal Street, Allegheny City.
By 1920, Walter was married to Frances.  They were renting an apartment at 1204 Palo Alto Street on the North Side of Pittsburgh.  He was employed as a photographer.  Frances, who was born in Germany to German parents, became a naturalized citizen in 1900.  She was born August 5, 1893.  To date I have found no marriage information. 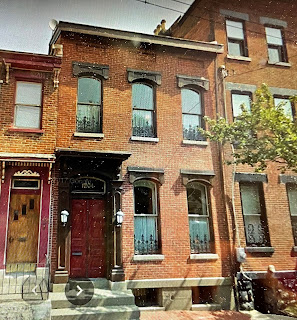 Walter and Frances were renting at 1204 Palo Alta on the North Side of Pittsburgh.  Today it is in an area called The Mexican War Streets.  The North Side was formerly called Allegheny City, where Walter lived as a boy.  The house is a single family home built in 1872 with three bedrooms and one bath.  The space and rent was shared by the Starks and the Neale family; a husband, wife and adult sister. 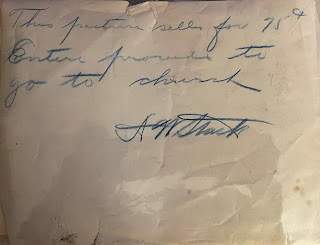 This is the back of a group photograph taken of the cast at a church play at Bellevue Methodist Episcopal Church (now called Greenstone United Methodist Church), Avalon, Pennsylvania.  Circa 1924 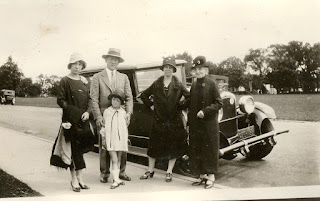 1928 Motor Trip to Washington, D.C., Virginia and New York
Frances Stark, Walter Stark, Martha Jean Stark (my Mother),
Martha Frederick Stark (my Grandmother) and Granny Stark
This was an extensive motor trip taken in Walter's car during the month of August 1928.  The suitcases were attached to the running board on the drivers side of the car.  My Grandfather Stark must have taken the picture.  In fact, this entire series of photographs of Walter with family, my grandfather probably was behind the camera.  There is a blog on Flipside outlining the itinerary.

I was unaware that he was the official photographer for the Avalon school system beginning as early as 1910 until I was flipping through the pages of a 1928 Avalon High School yearbook looking for someone.  I decided to scroll to the back  in case there was an index. No index; however, several pages in I was excited to see the advertisement pictured above.  WAHOO!!  The question from the 1910 census is answered--Walter was operating his own photography studio. By the time my Mom and Dad graduated from Avalon High School in 1939, Walter was not the school photographer. 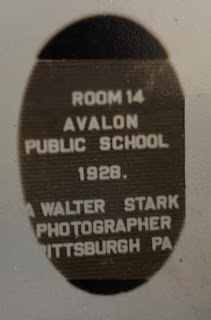 I was aware that Walter was the school photographer for the Avalon, Pennsylvania school system in the mid 1920's through the early 1930's. I have my parent's elementary class photos and Mom's, Uncle Walter, is listed as the photographer.

Googling Walter's name, I found a class photo he took in 1930 for the Emsworth, Pennsylvania elementary school.

There is a 1930 Pennsylvania Federal Census report for the Starks. They were renting an apartment at 3332 Niagara Street in the city of Pittsburgh. Walter was still employed as a photographer.  Frances lists that she was 16 when she married, which would be circa 1914.  (Year: 1930; Census Place: Pittsburgh, Allegheny, Pennsylvania; Roll: 1971; Page: 6A; Enumeration District: 56; Image: 139.0.)
The duplex at 3332 Niagara Street is a two bedroom one bath home located in the Oakland section of Pittsburgh.  Curiously, it is listed as having been built in 1932.  Walter and Frances were living there as early as 1928.  When I interviewed Dorothy Cooper Richards, Walter's niece, she told me that she and her sister, Lois Cooper Nickels, would go to Aunt Frances and Uncle Walter's home, she believed was in Oakland.  They would spend the day stuffing school photographs in envelopes.  Their reward was a bear dinner. 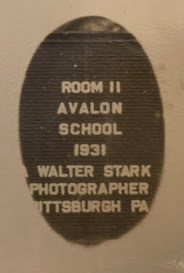 Walter did attend my paternal grandfather's (his older brother) funeral in Avalon in 1945.  He signed the funeral book, Frances did not. Was she unable to travel or had she passed.  I was told that she died in Florida; however, I have not found a death certificate for her.
Walter traveled to Pittsburgh for his niece, Dorothy Cooper's wedding on October 30, 1947.  She told me that he walked her down the aisle.

There is a death record for Walter in Miami, Florida, October 1962.  In an interview years back, with one of my Mother's cousins and a niece to Walter and Frances, she told me that she was contacted as next of kin by the coroner of Miami asking for financial assistance with Walter's burial. He is buried without benefit of a grave marker. It may also be located in a "potters field" grave sight.

The Miama Herald
Miami, Florida
Tuesday October 23, 1962
page 36
Just located an obituary for Alfred Walter Stark and his date of death was Friday, October 19, 1962.
So a few more pieces are in place in the puzzle that is my grand uncle.  If there is anyone working on family genealogy that has my Uncle Walter Stark and his wife, Frances, as a branch on their tree.  Please contact me.
Rewritten and updated in February 2021
Obituary update August 31, 2021

The Stark Family Vacation of 1928