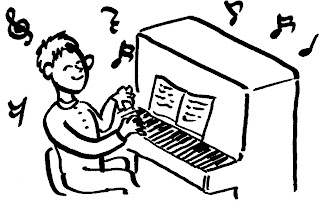 I have been hard at work lately blogging about my maternal Stark Family.  Some work is new and others, like this one, is an update of a previous blog written in 2012.  I wrote a blog about the Munger's back in 2009 as a Tombstone Tuesday.  It was very skimpy.  The recently rewritten one, Mont Mettie Munger and Lucy Stark Munger, is not.
While I was researching the Munger Family for the umpteenth time, I google searched my maternal grand uncle, Mont Mettie Munger.  The usual stuff showed up.....except one and it is the new information I have been able to add to both blogs.  It was most definitely a genealogy happy dance moment.
Mont Mettie Munger, my maternal grand uncle, has been quite a man of mystery. As I mentioned in the Munger blog, I have no stories of him other than my mother, who was in junior high school, telling of Uncle Mont sitting at Aunt Dorothy's player piano and tickling the ivories with GREAT showmanship.  My Mom thought him very funny pretending to play the piano for the gathered family.  I now know that Uncle Mont was quite musical and could play the piano for real.
The 2012 Blog Story

Back in 2012, for some unknown reason, I was putting Mont's name into the google search engine and up popped some new and interesting information.  I found three Library of Congress listings for Mont M. Munger, Pittsburgh, composer and author.  Wow....somehow that little piece of family history was lost through the decades.


It appears that Uncle Mont composed two little ditties back in 1938:  On a Honeymoon Up in the Sky and Do You Remember Dear.  Uncle Mont was not on Tin Pan Alley when he crafted his two songs and neither were on the Pittsburgh Top Ten; however, an accomplishment none the less.  I wonder if the untimely death of his wife, Lucy Stark Munger in 1927, were the basis of the songs.

One of Mont's songs, On A Honeymoon Up in the Sky, was copyrighted, but not published.  His second song, Do You Remember Dear, was copyrighted; however, the listing does not mention whether he published it.  These are the only songs by Mont Munger that I have found to date. 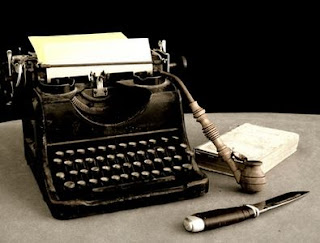 Uncle Mont may have used a typewriter to write the manuscript for his book.  He was proficient using one.  Back when he first came to Pittsburgh circa 1908, he was employed as a stenographer.
Song of Heaven, a 265 page vanity press book, was published in 1958.  It would be fun to find a copy.  I imagine it was given out to family members and friends; however, it has been lost to the ages.....unfortunately, probably is in Pittsburgh land fills.
The 2021 Story 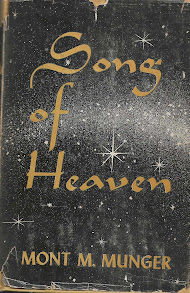 Well, NO it has NOT been lost to the ages.  This is the happy dance!  When I was google searching Mont last week, up popped an eBay sale for Mont M. Munger's book, Song of Heaven.  Now mind you, when I first wrote this blog back in 2012, I was taking it on faith that my maternl grand uncle Mont Munger wrote the book.  Seriously, how many Mont M. Munger's could be around in 1958.  I wrote the seller to see if there was some additional information about the author.  I was rewarded with definite proof that Uncle Mont wrote the book AND there was a photo and personal information on the dust jacket.  It is the first and only photo of him I have seen.  Thank goodness the dust jacket was still on the book.  Without that dust jacket, I would not have said--SOLD. 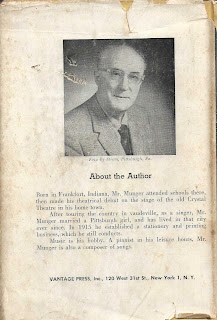 What I already knew from previous research--Mont's, birth place and his stationery business.  What was a new eye opener--his vaudeville days.  I was able to find some information on his touring and entertaining at the Crystal Theater.  No wonder he was so entertaining on the player piano at family gatherings in the late 20's and early 30's.
If you are interested on the small amount of vaudeville performances I have found, it is on the blog, Mont Mettie Munger and Lucy Stark Munger. 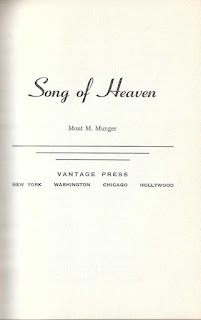 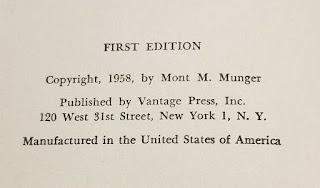 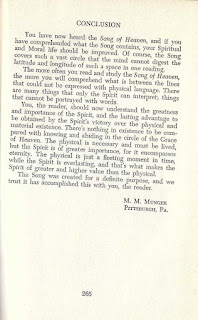 Song of Heaven took Uncle Mont fifteen years to complete.  It is a book of poetry made from rhyming couplets. The thrust of the philosophy contained within the poems is that man must depend on the Divine Spirit to obtain contentment.  It is important for the Spirit to have a victory over the physical and material existence.
Rewritten February, 2021
Other Munger Blogs on Flipside
Mont Mettie Munger and Lucy Wilma Stark Munger
Mont Mettie Munger Vaudevillian