Decades ago, while at the Senator John Heinz History Center in Pittsburgh, my father was excited to tell me that he had seen a photograph of the steamboat La Belle.  His memory was that his Grandmother VanGilder had been a cook on the La Belle under the leadership of Captain Faddis.  That memory stuck in my mind. 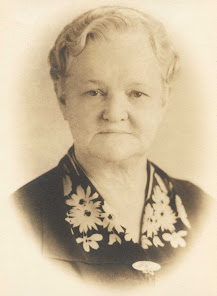 The grandmother Dad was referring to was his maternal grandmother, Jessie Poole VanGilder.  My paternal great grandmother, Jessie, has been a favorite of mine.  I have done years of research, written numerous blogs, a timetoast timeline and took a day trip down the Monongahela River (known as The Mon) tracing her residences along the river.

I had never signed up for Ancestry's newspaper subscription.  Early in 2021, I pulled the trigger and added the additional payment to get more up to date newspapers.  Pittsburgh is covered, which was the primary reason I subscribed.  I have been rewarded over and over, not just in Pittsburgh, but with the many other city newspapers that are included. 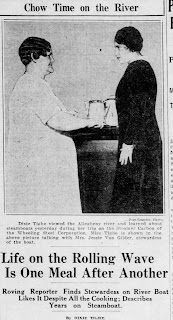 On September 28, 2001, I was searching the Pittsburgh papers for articles and obituaries on Jessie's daughters when I decided to pop her name in the search engine. Imagine the shock when an article appeared on the screen, front page, above the fold in The Pittsburgh Post Gazette, Thursday, May 22, 1930--Chow Time on the River featuring Jessie as the stewardess on the steamer Carbon.  I have transcribed Chow Time on the River on Flipside. 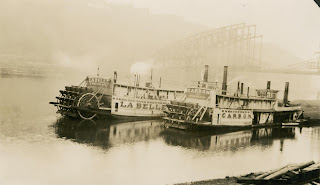 The La Belle and The Carbon
This article was the first documentation that Jessie was a cook on steamboats (also referred to as towboats).  Captain Faddis, who my Dad had mentioned, happened to be the navigator of this steamboat and in the article, Jessie mentions that it is the second time on the river with Captain John Sedgwick Faddis.
The article has provided me with insight into Jessie's years following the family's relocation from Morgantown, West Virginia to Woodlawn (Aliquippa), Beaver County, Pennsylvania about 1911.  She outlined her years cooking on boats beginning on what she refers to as a government quarter boat in 1913.
As I have blogged before on Flipside, Jessie was not a novice when it came to cooking.  Following the untimely death of her husband, George Ethelbert VanGilder, in 1904, she opened their home to West Virginia University students and ran a boarding house.  She had a boarding house in 1909 in Sabraton, a town outside of Morgantown and she is listed as the proprietress of a hotel in Morgantown on the 1910 West Virginia census (with 26 boarders, employees from a tin mill) and in Pittsburgh on the 1920 census she ran a rooming house housing her four daughters, two grand daughters and nine roomers.
There are numerous articles in the North Charleroi, Pennsylvania newspaper regarding Jessie visiting her married sister, Sarah Poole Pinyerd.  North Charleroi is at Lock 4 on the Monongahela River.  Jessie probably disembarked a steamboat to visit.  One mention is in 1918, Jessie was living in Allenport on the Mon.  She must have left the life on the river for a period of time to be running a boarding house in 1920.
In 1921, she did have a residence in Rices Landing on the Mon.  As her daughters were employed or married, Jessie must have turned to cooking on the river full time as her permanent form of employment.
Great Grandmother mentions in the article that she was the stewardess on a Vesta towboat.  This employment is placed after the government quarter boat.  The Vesta Company was a subsidiary of he Jones & Laughlin Steel Company.  Barges loaded with coal from the Vesta mines traveled the Mon between Allenport and Fredericktown.  Was Jessie working for Vesta for a few years before 1920 as she was living in Allenport in 1918?
Pinning down her actual living and working movements following the family's move from Morgantown has been difficult at best.  Relocating in Woodlawn, Pennsylvania (the company town of Jones & Laughlin Steel Company) circa 1911 creates a link to the company's coal mines.  It has been my understanding that Jessie ran a boarding house there for steel workers.  Her four daughters would have been ages 17, 15, 13 (my paternal grandmother) and 8.
Was the oldest daughter, Mary Louise "Bobs" VanGilder, age 19, in charge of her younger sisters in 1913, while Jessie was cooking on government quarter boats?  The 1930 article on Jessie as a stewardess notes that her youngest daughter would accompany her mother during the summer on a steamboat.  Perhaps Mom Jessie was not actually living on the towboats but coming back to Woodlawn daily?  weekly?
I do know that my grandmother met my grandfather in Woodlawn and the Hughes Family relocated there circa 1915.
There is a North Charleroi newspaper article I found mentioning that my grandmother was "visiting in Woodlawn in 1914.  Were Jessie's daughters living with her sister, Sarah Louise Pool Pinyerd for several years?  Various census and other records show that the Pool/Poole sisters did cycle around from sister's residences.  This was even true for my Grandmother Hughes.  Relations did live with them in Avalon from time to time.  This was probably a "learned" extended family support assistance from my Grams having lived with various aunts during her upbringing.
And by 1920, Jessie had gathered her adult daughters up and they were all living in the boarding house Jessie was managing in Pittsburgh?  This would have been several months before my grandmother married my grandfather.
In 1921 Jessie was living in Rices Landing on the Mon.  How long she listed it as her residence is unknown.
My father's memory of his Grandmother VanGilder working on the LaBelle could be from the mid to late 1920's.  He recalled knowing when she was in town as he could smell the aroma of baking when he came home from school.
The newspaper article is dated 1930, so she was definitely working and living on The Carbon then.  She does not have a 1930 federal census report because she is living on the steamboat with her youngest married daughter, Jessica Virginia "Ginger" Barbour.
Ginger, married second, David Bowling Rootes in 1931 and moved to Akron, Ohio.  Jessie's death certificate lists that she had lived with Ginger, in Akron for seventeen years.  She retired from life on the river two years after the article in 1932 at age sixty two.
There are still gaps in the river years.  How long she was a stewardess on each steamboat is unknown.  How long the family lived in Woodlawn is unknown.  When the family gathered in Pittsburgh is unknown.  What is known is that Jessie spent seventeen years (with perhaps some gaps) on the river and probably in a full time capacity from 1921-1932.
The search is always ongoing.
Other Blogs on Flipside
No Body's Fool--Jessie Poole VanGilder
Same Person???--Jessie Poole VanGilder
Road Warriors--Tracing Great Grandmother's Life on the Mon
Tombstone Tuesday--George Ethelbert VanGilder and Jessica Poole VanGilder