My Hughes ancestors apparently originated in Wales; however, to date, this is where my story begins, Wordsley, a village located in the Kingswinford Parish, Staffordshire County, England. Wikipedia describes the location best,

"Wordsley is a village south of Kingswinford and north of Stourbridge in the West Midlands, England.  It is part of the Metropolitan Borough of Dudley and falls into the Stourbridge postcode and address area, being just north of the River Stour."


I seem to recall my paternal grandfather mentioning that back in the day, our Hughes family came from Birmingham.  Well, in a general way, they did.  Wordsley is located west of Birmingham.  Today there appears to be a motorway around Birmingham and Wordsley might be considered by US standards, a bedroom community of Birmingham.  Today it would take about 45 minutes to make the trip by car.

The key to my Hughes family history would unlock the door of the canal system which opened up England, especially those towns and villages located inland, to the industrial revolution.  Roads were not as developed in the 18th and 19th century and could not handle heavy weight, so a system of canals was developed to link many areas with seaside towns.  By the mid 19th century railroads began to take over; however, my focus is on the canal system and Wordsley from about 1840-1880.


My paternal 4x great grandfathers, William Hughes and William Hill, were both boatman, as was my paternal 3x great grandfather, Samuel Hughes.  They either pulled their boats or had a mule or horse to do the heavy work up and down the Stourbridge Canal.  Both families lived in the Wordsley Green area of Wordsley. 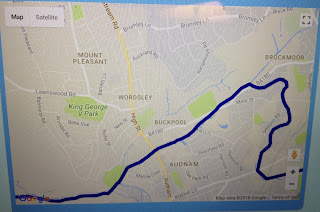 The Stourbridge Canal was built using the Stour River which flowed from Stourbridge to Stourport.  It connected with other canals helping to move products through this section of England and outward.  In the beginning the primary industry in the area was glass; however, with the advent of the canal, many more products became available.  One was providing access to the coal mined in Dudley. 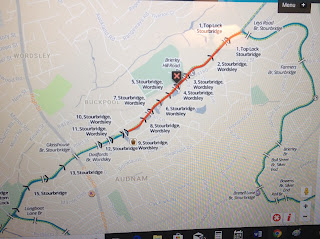 The canal is 4.2 miles in length with 20 locks.  There is a stair step section of sixteen locks leading up to Brierley Hill.

I have always been fascinated with canals and locks.  Perhaps I am genetically predisposed ;-)  I can remember when I was a child taking a trip on the Allegheny River in the Pittsburgh area and  being channeled into a lock.  The door closed behind the boat and water was pumped into the lock raising the boat up to the level of the water on the other side of the lock--very cool.  Obviously, it was a backward scenario going back down the river, with the lock door closing and water being released in the lock to gently lift us back down to the lower portion of the river.

Canals, with the towpath running beside, has also captured my attention since childhood.  How many times as children did we sing the song, Low Bridge or 15 Miles on the Erie Canal.  There was a time when we were on vacation and saw a  historic sign while driving near a portion of the Erie Canal in northern New York.  Of course we had to get out of the car and have a look.  Even here in the Cleveland, Ohio area we have the Ohio & Erie Canalway that runs from Lake Erie in Cleveland south to New Philadelphia, Ohio.  Hiking along the towpath is on my bucket list.

Numerous men and their sons, who lived in Wordsley, were involved with the boat traffic that flowed by the village on the canal; however, the primary industry was glass.  In the photo at the top of the blog there are four glass factory cones that are dominant in the view.  From mid century census reports, I have found cousins who were involved with the glass industry from the Hill family side of this tree. 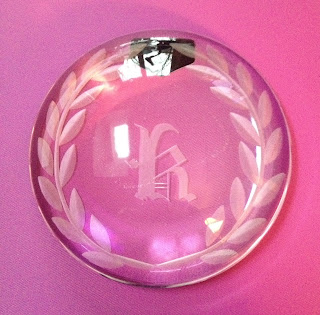 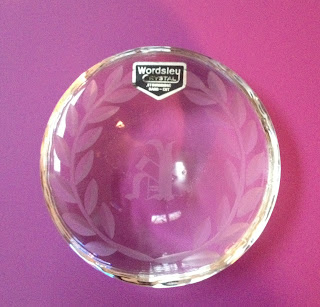 Several years ago, my UK friend, Heather, sent me this exceptional gift.  I was, and am, so appreciative of her thoughtfulness over the years.  How special to have a piece of my heritage which I can touch.