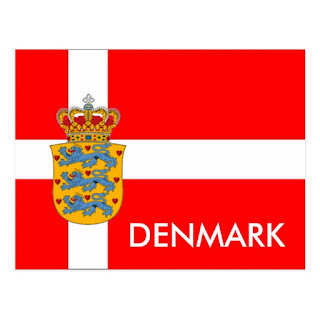 Of all the difficulties I have encountered researching my Olesen line I have to list the language barrier at the top while searching for names has been close behind--the change in surnames during the later part of the 1800's in Denmark, my great great grandfather listing his father with Olesen as his surname on a UK document along with Lonne entered as a middle name (or an identifying name), Kristian/Christian, Ingvard/Ingvart, Geesh!  However, when all is said and done and countless hours of comparing and contrasting the research, I do believe that I have found the Denmark branch of my Olesen Family Tree.  And I'm sticking to it.

Before I begin listing and organizing my Olesen line in Denmark, I must give a huge THANK YOU to Susanne S. Skaaning, the administrator of a genealogical website in Denmark where I have found so much additional information and documentation.  I was able to locate census reports on line and put together a sketchy family chart.  Susanne provided actual dates and tied up many loose ends regarding the variety of names and surnames I was finding in the Danish and English documents.

Ole Christensen, vulgo Lonne (Lonne is comparable to a nickname here in the US--known as Lonne), was born on March 1, 1820 at Haurvig, Holmsland Kilt, Hind, Rinkobing, Denmark.  He was the son of Kristin Nielsen and Ane Kirstine Olesdatter, who were not married.  Ane Kirstine's father was named Ole Christensen.  Whether my 3x great grandfather was named for his maternal grandfather or the surname was taken from his biological father is unknown.

Ane Kirstine and her young son, Ole have eluded me when searching for them in the Danish census from his birth until I find him in the 1834 census as the fourteen year old adopted, foster child of his maternal uncle, Hendrik/Henrich Olesen, vulgo Lonne, and his wife, Ane Kirstine Christensdatter.

Ole's mother, Ane Kirstine Olesdatter married an older widower, Ingvart Sorensen on January 7, 1832.  Ingvart is listed on census reports as a farmer and an attorney.  Her husband died eleven years later.  The couple made their home in Bork, Norre Home, Ringkobing, Denmark.


My 3x great grandfather lived with his maternal uncle until is uncles death in 1864.  His Aunt Ane Kirstine Christendatter died in 1842 when Ole was twenty-two.  The records indicate that his Uncle and Aunt had three children who were all deceased by 1842.  Ole was the only child to live in the house once he was adopted.  Hendrik was a farmer and a fisherman and owned substantial property in Haurvig, Holmsland Kilt, Hind, Ringkobing.  Ole probably spent his days as a youth and teen working alongside his uncle, learning the trades of farming and fishing.

On October 15, 1842 Ole married Lisbeth Laustdatter, daughter of  Laust Svenningsen and Marie Ingvardsdatter at Sonder Bork Church.  The translation of the marriage document is as follows:

The couples first child, Henrik Olesen was born on April 18, 1843.  Their second child, another son and my great great grandfather, Christian Ingvart Olesen, was born on August 23, 1844.  Two months later on September 25, 1844 Hendrik had a retirement contract drawn up and Ole, at the age of twenty four took over his foster fathers/maternal uncles farm.  The only condition was that Ole was to pay his uncles funeral expenses.  Hendrik continued to live with Ole and his family until his death on June 3, 1864 at age eighty one.

As I was searching through the Denmark census reports I noticed that my great great grandfather was only enumerated with his biological family once, in 1845 at the age of one.  Did they "farm" him out to another family?  Was he a troublesome child?  To date I have only been able to find him again on the 1860 census at age sixteen living with the family of Niels Jensen in Ribe County and he appears to be employed as a servant or farm boy.


From the census reports Ole and his family were enumerated in various places in Ringkobing County throughout the years from 1845 until his death in 1870.  i do not know if Ole owned owned property in the additional towns he has been enumerated in other than Haurvig.

Ole committed suicide at age fifty by hanging on August 25, 1870 at his farm in Haurvig.  Was he a depressive personality?  Did he have a painful or debilitating illness?  We will never know.  On August 30, 1870 Ole was buried at Haurvig Church Cemetery, Holmsland Kilt, Hind Ringkobing.

The family made their home, as listed on the 1834 Denmark census, in Sonder Bork, Norre Horne, Ringkobin, Denmark.

Of great interest to me was that Ingvart Sorensen and Ane Kristen Olesdatter (the mother of my 3x great grandfather, Ole Christensen and future husband of Lisbeth Laustdatter) lived in the same town as Lisbeth Laustdatter--Sonder Bork.  I have wondered if Ole stayed in touch with his biological mother and  this could provide an insight that he did.  Visiting his mother could have provided him the opportunity to meet his future wife.


As mentioned above, Lisbeth Laustdatter and Ole Christnesen married on October 15, 1842 in a ceremony at  Sonder Bork Kirke, Norre Horne, Ringobin, Denmark.  A copy of the marriage record is shown in Ole's information.  Googling around the net, I did find a picture of the kirke (church).  From additional information on Susanne's family tree, it appears that Elisabeth's parents were also married in this church and both are buried in the church cemetery.  I was not able to locate either of them using the website search engine; however, Susanne does have references listed for these events.

As I slowly make my way through the names of both groups of families, I am beginning to see where the various Danish family names evolved.  This is true for my great great grandfather, Christian Ingvart Olesen.  Ingvard was the first name of his mother's father, Christian's maternal grandfather.

I should mention here that Lisbeth is documented with several variations to her name.  Her forename has been shown as Lisbeth, Elisabeth, Elisebeth, Lisbet and Elisbet.  Her surname is no different; Laustdatter, Lauridsdatter, Lauridsen, Lauritsen. Laursen and Lavridsen.  Those of us who work with census reports know that name spellings can vary depending on the enumerator and many of the above variations have been found on the Danish census over the years.

From the census reports, Lisbeth grew up in a family having three different women as the mother figure.  Her biological mother, Marie Ingvardatter, died at age 34, one month after delivering her fourth child.  No cause of death is listed.  Lisbeth would have been age five when her mother died.  Her father married second, her mother's younger sister, Kiersten Ingvardatter, Lisbeth's maternal aunt.  At age twenty nine, during child birth, Kiersten died.  Lisbeth would have been age ten.  Several months following the death, Laust married Maren Jensdatter, his junior by over ten years.  It is with her father, Laust and her step mother Maren, that Lisbeth is enumerated on the 1834 Denmark census.

I imagine that Lisbeth spent her days, while living in her father's house, cooking, cleaning and taking care of her brothers and sisters.  I do not know if she had any schooling or if she was able to write her name.  She was taught to be a housewife and I am certain that her days were extremely busy as a married woman as she had eight children in her family with Ole.  Her children, at least the boys were literate as I have seen as adults that they were able to write their names.

There is no way of knowing Lisbeth's thoughts and what her life was like.  It does appear that one of her sons, my great great grandfather, was estranged from the family.  What caused the separation, and as a mother, was Lisbeth in agreement with the decision?  In the early 1870's she emotionally had to deal with the suicide hanging of her husband and at the same time, two of her son's emigrating from Denmark.  Svenning Iver Olesen immigrated to the United States arriving on March 25, 1870 and my great great grandfather, Christian Invart Olesen, arrived in England in 1871.

Lisbeth died at age seventy eight on February 20, 1899 at Haurvig, Holmslnd Kilt, Hind, Ringkobing, Denmark.  Perhaps she was still living on her husband's inherited farm.  She was buried beside her husband at Haurvig Church Cemetery. 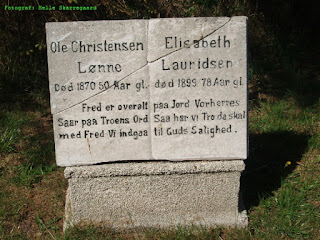 Peace is everywhere on earth our Lord
Saar in the words of faith.  So we have  faith then will
With peace we enter into a world of salvaion of God