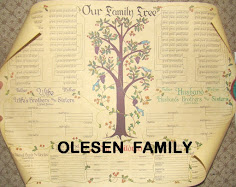 Recently, my UK friend, Heather, uncovered an important document for my paternal great grand uncle, Frederick Olesen. When I blogged last week about Frederick, I was wondering where those folks that had to serve time doing hard labor was located in the Durham County area of England. This ancestor definitely falls into the "bad seed" category. With this latest piece of the pie, Frederick served with the army in England.

Inquiring minds wonder if this was hard labor service oriented. 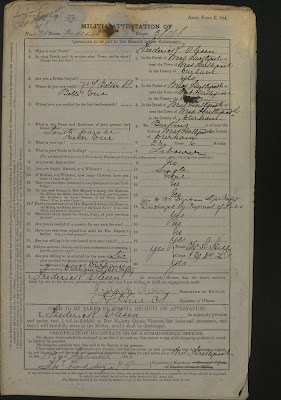 The attestation paper was signed on September 27, 1898. Of interest to me is question 14 on the document, asking if the person had ever served with Her Majesty's service and Frederick's answer was YES. It appears that he is signing up to serve with the same battalion that he served with at a previous time--3rd Battalion Durham Light Infantry. Also, question 12, asking him if he has ever been sentenced to imprisonment is answered NO. One would surmise that serving time of hard labor is not serving time in prison. Remembering my last blog about my paternal great grand uncle, this document is signed almost five months following the newspaper article when he was charged with larceny of a bicycle in Hartlepool, England. That newspaper account said he was sent to prison.
The attestation paper naturally led me back out on the web to google 3rd Battalion Durham Light Infantry. My question here is whether Frederick served or was a member of a volunteer or reserve militia. From what I can understand, he actually served, the volunteer militia was not formed until 1908. I have also seen that this battalion was sent to South Africa during the 1890's and I found an immigration document for a F. Olesen born 1875 who was on the ship Lismore Castle, on September 12, 1896 bound for the Cape, South Africa. (Ancestry.com) Again, this begs the question, is this my great grand uncle perhaps during his first service with this army group? 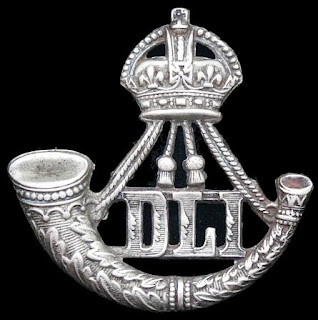 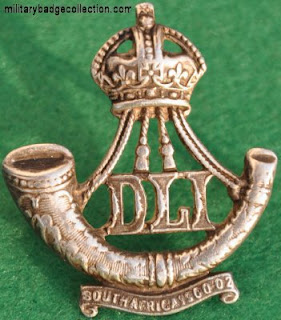 I was easily able to locate the badge of the 3rd Battalion Durham Light Infantry and also there was a special badge for those who served in South Africa. 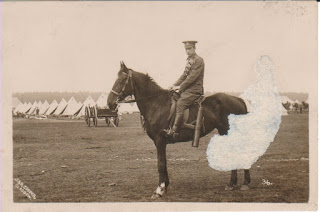 I also have a military photo post card that was among pictures glued into albums by my paternal grandmother. This one had no name attached to it. Unfortunately, even with various magnifiers I have at home, I was not able to say with 100% accuracy that the badge on this soldiers hat IS the Durham Light Infantry....but it is very close ;-) The face appears to be a younger man. The photo was taken by a photographer from Glasgow, Scotland. The army camp; however, it not identified as being in Scotland. Perhaps this is Frederick Adolph Olesen.


I will add here that I have a photograph of Frederick's youngest brother, Ernest Alfred Olesen that is identified by my paternal grandmother. She would have known Ernest as he immigrated to the United States. She would not have known Frederick, nor would my paternal grandfather have recognized a photo of his uncle.
The attestation document has given insight into Frederick's life when he was not breaking the law as a young man.  I wonder if he was active in the military during World War I?  I wonder if he may have resigned up after the last newspaper article of him sleeping under the hay in 1923 or if he continued living the life of an indigent? Much more research is needed here to fill in the blanks.