My paternal great great grandfather, Christian Invart Olesen, has been mentioned in numerous blogs on Flipside; however I have not spent the time putting together his story....until now.  Frankly, he has been somewhat elusive.  He died rather young and his widowed wife and several of his children, who crossed the pond, did not speak of him.  At least not to anyone who could have passed a story or two along to me.  Another stumbling block has been that he lived and died in West Hartlepool, England and obtaining records across the pond can be difficult.

Fortunately, I do have a good genealogy friend, Heather, who lives about 10 or 15 miles away from Hartlepool.  She has sent me "bits and bobs" about my Durham County family over the years. There is also a fellow who lives in Hartlepool, who occasionally sends me family information that he finds in newspaper and church records.  The Olesen file begins to fill.

A month or so ago, Heather emailed me to say that there is now a website with a search engine of numerous UK newspapers.  She decided to sign up for one month to access the records.  Without paying the search engine will find the names, although you only get a snippet of the article.

She has located numerous articles about my West Hartlepool relations and the ones she sent to me on the Olesen Family has filled in some gaps in my research....enough so, that I think I can finally do a blog on Christian Invart Olesen.

Christian was born about 1844 in Denmark, the son of Ole Tonne Olesen, a master mariner.  To date I have not found the actual date of his birth or what city or town in Denmark he was from. Christian also followed his father's lead in a seafaring life.  His primary occupation was that of owning a ship chandler shop in West Hartlepool.  He was also listed as a seaman, a clerk for a ship broker and a ship's steward over his lifetime.


The first record of my great great grandfather in West Hartlepool, England is the 1871 United Kingdom census.  He is a boarder in the home of Ferdinande Weiss on Victoria Terrace, Stranton, West Hartlepool.  Christian is employed as a clerk for a ship broker.  My interest in this census report is not only Christian.  Ferdinande Weiss is the widow of Frederick Heindrich Adolph Weiss and the mother of Adolph and Ferdinande.

The few years following their marriage and the birth of their first two children appear to have been difficult for the Olesen's.  When my great grandmother was born in 1876, the address listed on her baptism record is Scarbrough Street, which begs the question....were the Olesen's living in the same house as Ferdinande's mother?


In February 1877, Christian lost his ship chandler shop through bankruptcy. 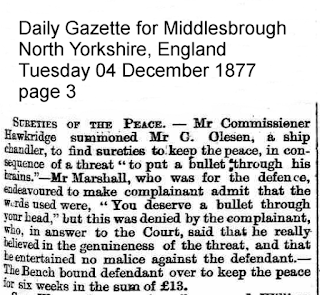 On December 4, 1977, Christian appeared in court to answer a charge of threatening a man in West Hartlepool, England.


On June 13, 1878, Christian was charged by his mother-in-law with threatening language and threatening to kill her son, Alfred Weiss.  He also became physical smashing the lock to the front door and entering the house.  The newspaper article lists his residence at that time as the Royal Hotel. Was he staying there alone or with his family.  Or was the family staying with Ferdinande Weiss at her home on Scarbrough Street?

Christian was listed as unemployed in the 1881 United Kingdom census report.  There is no way of knowing how bills and rent were paid or what employment was available to Christian in West Hartlepool at that time, especially with residents knowledge of his violent behavior.


A new wrinkle to add to Christian's unsavory character, theft and time spent in prison.  I have to admit at this point, I can readily see why no mention of this fellow was given to succeeding generations in the United States.

He is not enumerated on the 1891 United Kingdom census.  Ferdinande is listed as married.  Perhaps he is at sea giving her some much needed relief. 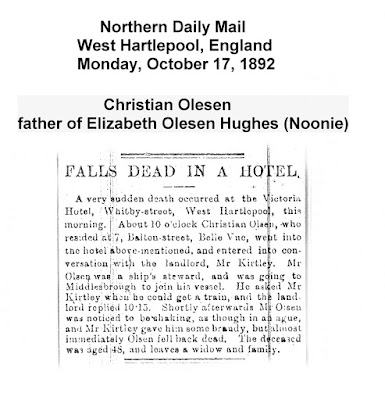 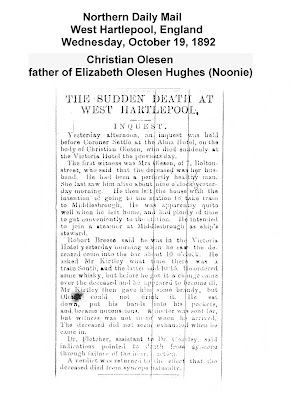 Christian left this world the way he seemed to live it....dramatically.  On his way to work, he stopped in at a local hotel to have a drink before boarding a train to Middlesbrough to join his ship. The article indicates that he was employed as a ship's stewart.  Due to the unusual nature of the death, there was an inquest and it was determined that my paternal great great grandfather died from syncope.


"Syncope is temporary loss of consciousness and posture, described as "fainting" or "passing out." It's usually related to temporary insufficient blood flow to the brain. It most often occurs when the blood pressure is too low (hypotension) and the heart doesn't pump a normal supply of oxygen to the brain." (from the American Heart Association website http://www.heart.org/HEARTORG/Conditions/Arrhythmia/SymptomsDiagnosisMonitoringofArrhythmia/Syncope-Fainting_UCM_430006_Article.jsp#.VvVgu3z2bIU)

Truthfully, the story of Christian Invart Olesen may have been better left a "brick wall,"  although every family history does need a few colorful characters to enhance the tale.  I thank my friend Heather, for putting up with me during the research process...continually emailing her with new finds to copy for me and for her diligence in responding and finding Olesen articles on her own.  I think we fully mined the "free" month of the newspaper website.

Olesen's on Find A Grave: