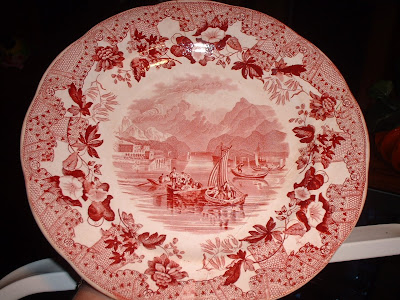 Provenance of the Enoch Wood Plate
“European Scenery”
Circa 1818-1846

This plate was one of several items plucked from a trash bin on the tree lawn of Grams and Pop Pop’s(my paternal grandparents)apartment at 71 North Bryant Avenue, Bellevue, Pennsylvania in the early 1960’s by my Mom. I have been told by Mom, Aunt Faith and Grams’ niece, Kae Wallace Billik, that when Grams and Pop Pop moved to St. Petersburg, Florida Grams dumped most of the family belongings out on the tree lawn for the trash pickup. Various family members from both the Hughes and VanGilder sides picked heirloom treasurers out of the garbage cans. Apparently, Grams wanted a new start in Florida and did not want to be encumbered with old “stuff.” Consequently, much of our family history is in a landfill somewhere in Pittsburgh, Pennsylvania. 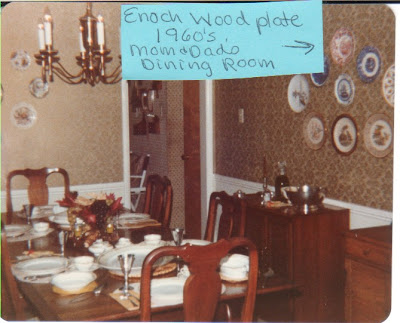 The plate graced the dining room wall of my family home on Bramble Lane in Pittsburgh, Pennsylvania for over twenty years. When the house was sold in 1982 Mom gave me several old plates that once belonged to Grams and I stored them in a box in the attic. One day, not too many years ago, and a move and an attic later, I happened to remember the plates and added them to my dining room décor.

The family history of this particular plate is that it comes from someone in either Grams or Pop Pop’s background. I do not know if the plate traveled across “the great pond” back in the early 1900’s when three voyages were made to and from Hartlepool, England by our Great Grandmother, Elizabeth Olesen Hughes, or if Great Great Grandma Olesen brought it to the states when she immigrated in the early 1920’s or if it was purchased in the United States by one of our West Virginia ancestors. Regardless of who originally owned the plate it becomes yours through the Hughes Family. And I can guarantee that it was Grams, the master of glue, who cemented it, back together! 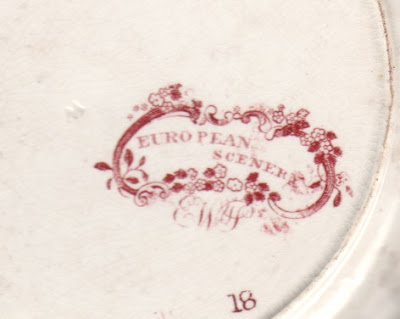 European Scenery in Cartouche and EW or EW & S

The plate was manufactured by the prominent potter, Enoch Wood of Burslem, Staffordshire, England. The Wood pottery firm was in business from 1790 until 1845, five years after Enoch Wood’s death. In 1818 Enoch Wood purchased the business outright and the name became Enoch Wood and Sons. There was a high demand for pottery from Staffordshire in the United States during the early part of the nineteenth century and Enoch Wood and Sons became the largest exporter of earthenware pieces. The business closed five years after Enoch Wood’s death when the survivors claimed their money from the estate.

The county of Staffordshire has historical importance to the Hughes Family. The earliest Hughes Family members that I have been able to trace came from Staffordshire going back to the late 1700’s and early 1800’s; however, they were not from the pottery area. Our ancestors lived in the small village of Wordsley and the male members were employed in the iron and coal areas. It was before 1871 that Samuel and Ann Hughes moved their family from Wordsley to West Hartlepool, England.

Plate given as a wedding gift to my cousin, Phyllis Hughes Goodman