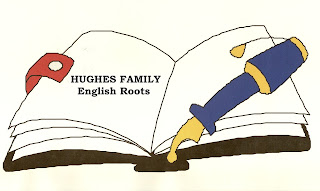 William Hughes, my paternal 4x great uncle,was born in Wordsley, Kingswinford, Staffordshire, England.  As mentioned in previous Wordsley Hughes blogs, I do not have his exact birth date only his baptism.  The son of William Hughes and Mary Bourne (or Green), William was baptized on October 31, 1841 in Wordsley, Staffordshire, England.  He was the fifth child to survive and joined two older brothers and two sisters.

William's first census report was 1851.  I do want to note that he was listed as a scholar, which I would think means that he is attending a school in Wordsley.  Keep this thought on the back burner.  The family appears to be doing very well financially with William's dad producing ale and also hiring young men to run his boats on the Stourbridge Canal.  William's paternal grandfather, John Hughes, a boatman was living in the home.

By 1861, William, age nineteen, was still at home.  All his siblings have left except for himself and his sister, Mary Elizabeth.  He was working in one of the local mills as a puddler, like his older brother, Samuel.  Grandpa John Hughes was still living in the house and there were two additional men working for Williams' dad on the boat.  It appears that William has lived his childhood and teen years in a house on Wordsley Green.  Whether William's father was still making ale is not known.  Instead his listed occupation is boatman.

Sometime during the 1860's, William relocated to West Hartlepool, England.  His brother, Samuel Hughes and family also made the same move.  This is a "who came first, the chicken or the hen"?  Did the two brothers travel together or did one move first and send word that there were plenty of jobs for puddlers in West Hartlepool?  Answer--unknown.

On December 12, 1870, William Hughes married Elizabeth Robinson at the Stranton Parish Church, West Hartlepool, England.  Of interest to me is that my paternal 2x paternal great grandfather, and William's nephew, George Henry Hughes, married a couple of weeks later at the same church.  I have figured that the Wordsley Hughes must have arrived in West Hartlepool circa 1867-8 to give these two men to meet, court and marry their wives.  The marriage certificate for William and Elizabeth was copied from Peter Cartwright's family site on ancestry.  Due to cropping, William's father's occupation is barely visable--William Hughes is a boatman.

The back burner item from the 1851 census report.  It is most interesting that William Hughes has signed his marriage certificate with an "X".  You might remember that back on the 1851 United Kingdom census that he was enumerated as a scholar.  I have researched this and found that there was no compulsory public education at that time.  Often the occupation scholar was used on the census reports, for young children, to hid that they were actually employed.  My guess is that William may have been working for his father. either as a boat boy or in the brewery business.  He certainly was not in school if he was unable to write his name at age twenty-eight.  I would also like to note that his older brother and my 3x paternal great grandfather, was literate and did sign his marriage certificate.

William and Elizabeth are lodgers in the home of Jacob Tisdale (?).  The house is on Musgrove or Musgrave in Stranton.  This is a street I was unable to find on my map.  My guess is that they are living close to the factories.  On this census, William lists Wordsley as the place of his birth.  He continues to be employed as a puddler.

My genealogical pal, Heather, has come to the rescue....again ;-)  Her great grandmother, Annie Tripp was born on Musgrave Street.  Question answered.  She found a little slice of the street still in Hartlepool today, the remainder has been built over.  Although the 1871 census report lists Musgrave Street was enumerated in Stranton, the map shows it is in the West Hartlepool area.  Shame on me for not being able to find this street on a map....it's fairly prominent....lol  It appears that in 1871 Musgrave was on the northern portion of Stranton; however, in the ensuing years it was incorporated into the West Hartlepool area.

William and Elizabeth welcomed a daughter to their family.  On September 3, 1876, Mary Ann Hughes was born at 96 Alice Street in Stranton.  I have not been able to locate any other birth certificates for this family.  A fellow researcher does list a son, William Hughes born 1872 and died 1872.  I wonder if they might have had another child between 1872 and 1876 that may have died.


Two years later, William, age thirty six, died on June 29, 1878, at his home on Alice Street, West Hartlepool, from cardiac disease.  Of great interest to me is that William's sister-in-law and my paternal 3x great grandmother,  Ann Hill Hughes, was present at his death.  She signed the certificate with an "X".  This death certificate gave me insight into where my 3x greats were living in 1878--Salisbury Terrace.


I did search for Elizabeth Robinson Hughes and her daughter, Mary Ann, after William's death and found them on the 1881 UK census living with Thomas Bambrough and his wife Mary Ann.  It is from Peter Cartwright's research that I learned that Mary Ann Bambrough was Elizabeth's older sister.  The census shows that Elizabeth was formerly a servant and is a lodger in the Bambrough house.  Lodger typically means living in the house, usually paying rent, where a boarder pays for the room and food.  I wonder if Elizabeth was paying to stay at her sister's house.  The family was living at 17 York Street, Thornaby, south of Hartlepool.


Checking Peter Cartwrights's research, Elizabeth Robinson Hughes and her daughter, Mary Ann Hughes were not enumerated with the Bambrough's in the 1891 United Kingdom census.  In fact, they are MIA until Mary Ann, at age twenty, married Joseph Cartwright on October 3, 1896, West Hartlepool, England.  The certificate shows that the marriage was performed at the register's office and not a church.  Apparently, Mary Ann Hughes did return to the place of her birth and married there and stayed.  And Elizabeth Robinson Hughes--did she remarry or did she die.  To date no records of either have been located.

Joseph and Mary Ann Hughes Cartwright had three children, two sons, Samuel and Joseph and a daughter, Sarah who died at age three.


Mary Ann Hughes Cartwright died at the age of twenty eight of pneumonia at her home on Thorne Street, West Hartlepool, England.  This Hughes line did continue through her two sons,  Samuel and Joseph Cartwright.

My thanks to Peter Cartwright, a cousin, who has so generously shared his information on this line of the family.