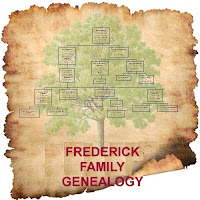 Over the past few months I have been traveling to and from Chicago, almost on a weekly basis. There has been little time for genealogy research and blogging. However last week, I entered another Frederick name into the Family Search search engine and was rewarded with some new information.

In my seemingly never ending attempt to find direct family members in this line of mine, I either have hit brick walls or dead ends. This might also be just that...another dead end.

I have blogged about my happy dance back in the fall regarding my grand uncle, Albert L. Frederick also listed as Burt L. Frederick, when I found his death certificate on Family Search. 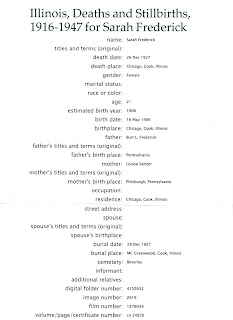 My latest find was the untimely death of his daughter, Sarah Frederick, at age 21 on December 26, 1927. Sarah was the only child of Burt and his second wife, Louise Saltzer. Sarah's death ends that branch..... 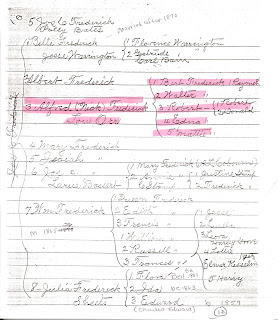 A yellow highlighter would have been sooo much better...lol
....but, maybe not. Well over a decade ago, I was sent some handwritten Frederick family genealogy. The papers were written circa 1909 and Raymond Frederick is listed as Burt's son by his first marriage. In fact, Burt's second marriage and daughter, Sarah, are not listed in this genealogy. Burt does show his marriage to Louise in 1904, as his second on the 1910 Illinois Census.

So, the brick wall continues....who was Burt's first wife? Did he have a son named Raymond Frederick? Did that marriage end in divorce? Where did Raymond Frederick go? Where is Burt in 1900? Why did the 1890 census burn????

Raymond Frederick, son of Albert L. Frederick.....did you exist and are your descendants out there????