I have been going back and rereading older blogs.  This was one that had to be totally rewritten.  First published in 2009, so much more information has been found, although there is still much missing.
My maternal first cousin one time removed, Mont Mettie Munger, Jr., born on April 6, 1920 was the the son of Mont Mettie Munger and Lucy Wilma Stark Munger.   He was probably born at Bellevue Suburban Hospital, Bellevue, Allegheny County, Pennsylvania. 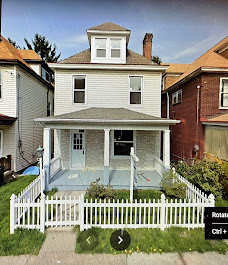 Little Mont, called Junior, was at home with his parents and older sister, Wilma Angie May Munger at 507 Marie Street, Avalon, Pennsylvania.  Granny Stark, Wilhelmine Schwartz Stark, Lucy's mother, also lived with the Mungers.
There was Stark Family support in Avalon, a borough of Pittsburgh.  Lucy's married sisters, Emily Stark Miller and Dorothy Stark Cooper, plus her brother, Charles Edward Stark all lived in town.  Her brother Alfred Walter Stark lived in Pittsburgh.
I have an older photo album from the early 1920's and it appears that the Starks vacationed, picnicked, and had day trips together.  Walter and Mont had cars.  I do not know if the Coopers and Millers had automobiles.  My maternal grandfather, Charles Edward Stark, never owned a car.  He took public transportation to work.

This item is cropped from my Mother's Baby Book.  Dated September 20, 1924, it features the Mungers and my Mother and Grandmother.  My Grandmother Stark (Teek) writes the entries as if my Mother is the narrator.  In 1924, my Mother was only three ;-)  I chuckle when I see that Teek refers to cars as "the machine". 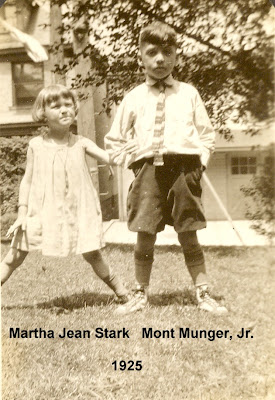 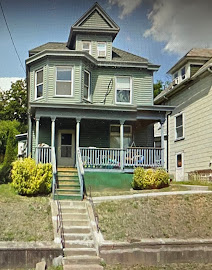 The Munger's were living in one of the two apartments at 421 Florence Avenue in Avalon,  when Lucy died.  The home was built in 1910 and houses two apartments.
There are no more photos of the Mungers in my Mother's photo albums.  I know that Wilma Munger did attend Avalon High School.  I did not find her in the Avalon High School Year Book in what would have been her senior year.

Mont appeared to be a good provider for his family. There are no family stories that have been passed down as to why Mont, Jr. was sent to the United Presbyterian Church Home in Adams Township, Butler County, Pennsylvania. On the 1930 census, his father is listed as a road salesman.  Perhaps young Mont, Jr. was sent to the home because there was no one to take care of him at his family home.
Mont, Jr. is enumerated as an eleven year old at the United Presbyterian Home.  The home (orphanage) today is called the Mars Home for Youth.  It is located outside the town of Mars, Pennsylvania.  How long Junior was a resident, is unknown.
It is important to mention that Junior's Dad and sister were both gainfully employed in 1930 and living in a house at 480 Florence Avenue in Avalon.  Mont lists the value of the house is $8,000 and he owns it.  Obviously, the depression did not affect Mont M. Munger. Mont is a road salesman for a paste cleaner supply company and his daughter, Wilma, is a demonstrator for the company.

I was somewhat surprised to find Mont, Jr. in the Avalon High School year book in my Mother's class in 1937 (sophomore) and 1938 (junior).  He is not in the 1936 (freshman) or 1939 yearbook, which would have been his senior year.
Mont, Jr. and his father are lodging in a house at 415 North School Street in Avalon.  Mont, Jr. is two days away from his twentieth birthday.  This enumeration gives a look into his residences.  He is enumerated as living at this same address in 1935.  Sometime between 1930-1935, Mont, Jr. returned home from the UP Home.  This fits with his attendance in his sophomore and junior years in high school.  The census shows he only went to two years of high school.   Mont, Jr. is listed as a new worker; however, the type of work is not shown.  He earned no income in 1939.
The house where the Mungers lodged, is currently listed as a single family home with three bedrooms and one bath.  Built in 1920.  When I tried to loop around to the back of the house on line, it appears that there may be an addition.  The 1940 census enumerates a husband, wife, four sons and three lodgers living here.  The head of the house is a renter.  Not the owner. 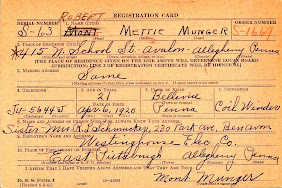 The Mungers are still living at 415 North School Street.  Mont Jr. is employed as a coil winder with Westinghouse Electric Company in East Pittsburgh.  Mont, Jr. keeps in touch with his married sister and lists her as someone who will know where he is living.  Junior is very tall, like his father, 5 feet 10 1/2 inches.  He has brown hair, brown eyes and dark brown skin.  Note that Junior's name has been drawn through and Robert listed as his first name. 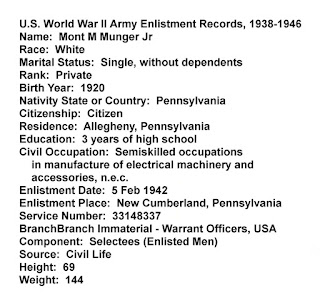 Six months after signing his draft registration, on February 5, 1942 at New Cumberland, Pennsylvania, Mont, Jr. enlisted to serve in the Army during World War II. 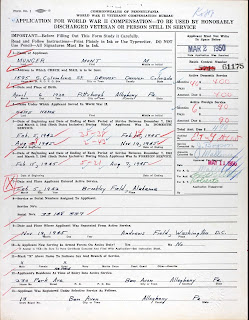 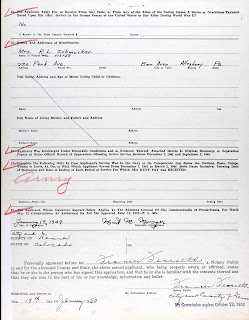 Mont, Jr's 1950 World War II compensation form for honorably discharged veterans gives some insight into his service.  He was in domestic service from February 5, 1942-February 14, 1945 and August 8, 1945-November 19, 1945.  He was in foreign service between February 15, 1945-August 7, 1945.
He entered active service at Brookley Field in Alabama.  He separated from active service at Andrews Field, Washington, D.C.  Mont was a member of the Army Air Force.
The papers were signed on January 19, 1949 in Denver, Colorado, where Mont was living at 1595 South Columbine Street.
Mont changed his name to Robert Mettie Munger; however, his military papers were under Mont.  He must have stayed in Denver for at a minimum the next fifteen years.
I lost his trail with his father's obituary, which lists Mont, Jr. as Robert, living in Denver.  That was in 1964. 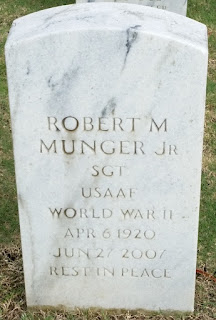 Forty-three years have passed.  Robert Mettie Munger died on June 27, 2007 in Lake Worth, Palm Beach, Florida.  His grave marker lists that he attained the rank of sergeant with the United States Army Air Force.  Robert is buried at South Florida VA National Cemetery, Lake Worth, Florida.
Questions still remain.  Did Robert ever marry?  What was his employment after service with the Army?  His sister also retired to Florida.  Did they remain in touch?  Visit?  Did he ever return to Pittsburgh to visit his father and relatives?
Rewritten, February, 2021

WOULD LOVE TO HEAR FROM YOU. All comments are welcome; however, if they are inappropriate, they will not be published.    PLEASE post your e-mail in the comment section if you would like to network about a particular surname or topic. I will capture it for my use only and not include it when I publish your comment.