Mary Ann Barnhiser Bell, daughter of John Barnhiser and Susannah Brown Barnhiser, was born circa 1830 in Maryland.  She married Allen Bell in Seneca County, Ohio on April 8, 1847.
I have not found a birth record for Lorinda Jane Bell who joined the family circa 1848-1849 in Ohio before the Bell's journeyed to Iowa.  Their form of travel could have been by railroad as there were tracks into Iowa as early as 1850.
Maps
I am a map person, feeling it is always good to see where people travel and live. 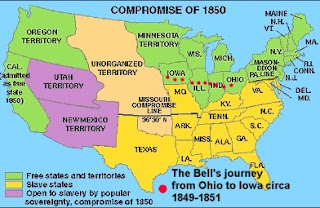 Areas open in 1850.  The two Bell families traveled from Ohio across two states to arrive in Iowa.  At that time, all of Iowa was not settled.  How they got to their destination is in question.  As mentioned, it coud have been by train or by horse and wagon. 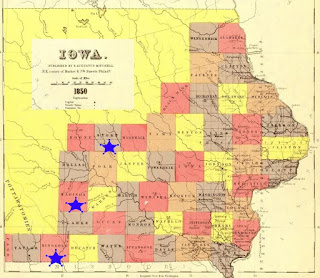 Counties settled in 1850 with blue stars showing the three counties where Allen and Mary Ann Barnhiser Bell settled in Iowa. 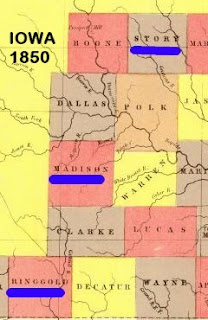 Closer look at the counties of Madison, Story and Ringgold.  There was abundant forests and streams in the growing state of Iowa. 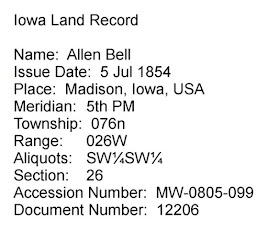 First record of the Allen Bell family in Iowa dated July 5, 1854 in Madison, Iowa.  Iowa opened with the Black Hawk Purchase of 1833.  An informative history of the states development is this History of Iowa.

1856 Census for Nevada Township, Story County, Iowa
There is an early Iowa census report in Nevada Township, Story County, Iowa for Allen and Mary dated 1856.  Lorinda J. and James W are listed.
Allen Bell, age 31, married, 5 years a resident in state, a carpenter, he is a voter, member of militia.  Has 5 acres of spring wheat, 120 bushels harvested.  He has 20 aces of corn and 1320 bushels harvested.  He has sold 26 hogs and valued at 50.  He sold 1 head of cattle valued at 45.
Mary Bell, age 28, married, 5 years a resident, born in Maryland.
Lorinda J. Bell, age 7, born in Ohio circa 1848-1849.
James W. Bell, age 2, born in Iowa circa 1853-1854.
On the side of the census is a description of the census:  "Nevada is the county town with a population of two hundred and 73 inhabitants in."
NOTE:  Of interest, also living in the same area are John and Sarah Bell.  John age 36, also born in Ohio and also a carpenter.  He also has a farm.  This family has five children.  This family has been in Iowa five years, too.  Possibly Allen's older brother and the two families traveled from Ohio together? 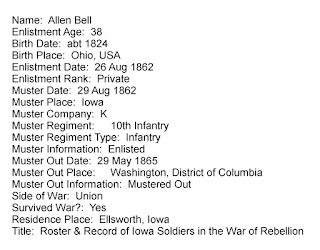 Allen Bell enlisted for service in the Civil War on August 26, 1862.  He mustered in on August 29, 1862 to the 10th Infantry Company K Iowa Volunteer Army.  He mustered out in Washington, DC on May 29, 1865 after almost three years of service.  When he enlisted he was living in Ellsworth, a town in Hamilton County, Iowa.
The Bell family moved around the state during their first decade.  Beginning on land in Story Township, next on land in Madison Township and when Allen went to war, he was living in or near Ellsworth in Hamilton County.  Hamilton is located north of Story on the map above and was not even formed in 1850, so it is not on that map.
Mary Ann would have been home for three years, managing the farm and raising her children. 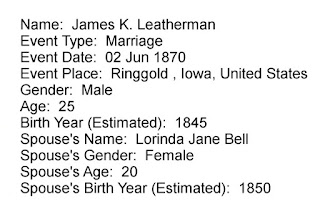 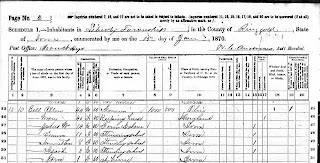 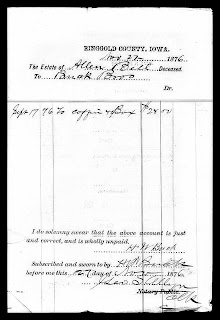 Allen Bell died in September 1876.  He left a will and ancestry has the dissolution of his estate.  The bill above is for Allen's casket dated September 17, 1876.  Mary left for Ohio before all the bills in the estate were cleared. 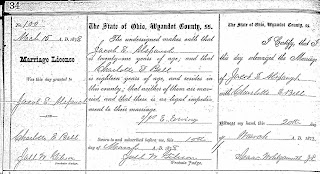 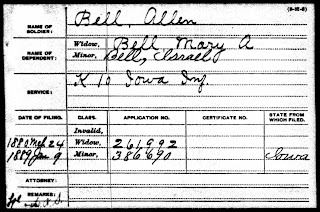 Mary Ann Bell applied for the pension payment on March 24, 1880 that was due her from her deceased husband's service in the Civil War .  On January 9, 1889, Israel Bell applied for the pension from Iowa.  Could this be Isaiah Bell, her son?  Perhaps a mistake?  I know of no Israel Bell's in the family.  Typically a second application is made when the spouse is incapable of applying or is deceased. 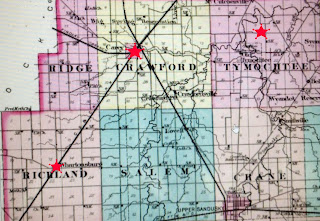 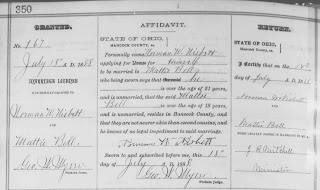 On July 18, 1888, Hannah Samantha Bell married Norman Nesbit in Hancock County, Ohio.  The name for Hannah on the license is Mattie, which would not be the nickname for Hannah.  It must be a mistake and should have been Hattie. 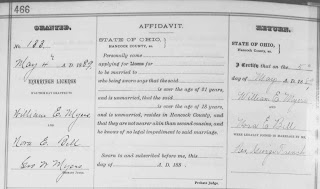 Isaiah Bell married Effie Roby in Hardin County, Ohio on April 8, 1890.
To date I have found no remarriage, burial or death information for Mary Ann Barnhiser Bell.
Known children of Allen Bell and Mary Ann Barnhiser Bell:
I WOULD LOVE TO HEAR FROM YOU. All comments are welcome; however, if they are inappropriate, they will not be published. PLEASE post your e-mail in the comment section if you would like to network about a particular surname or topic. I will capture it for my use only and not include it when I publish your comment.